Eruption of the Raikoke volcano in the Kuril Islands 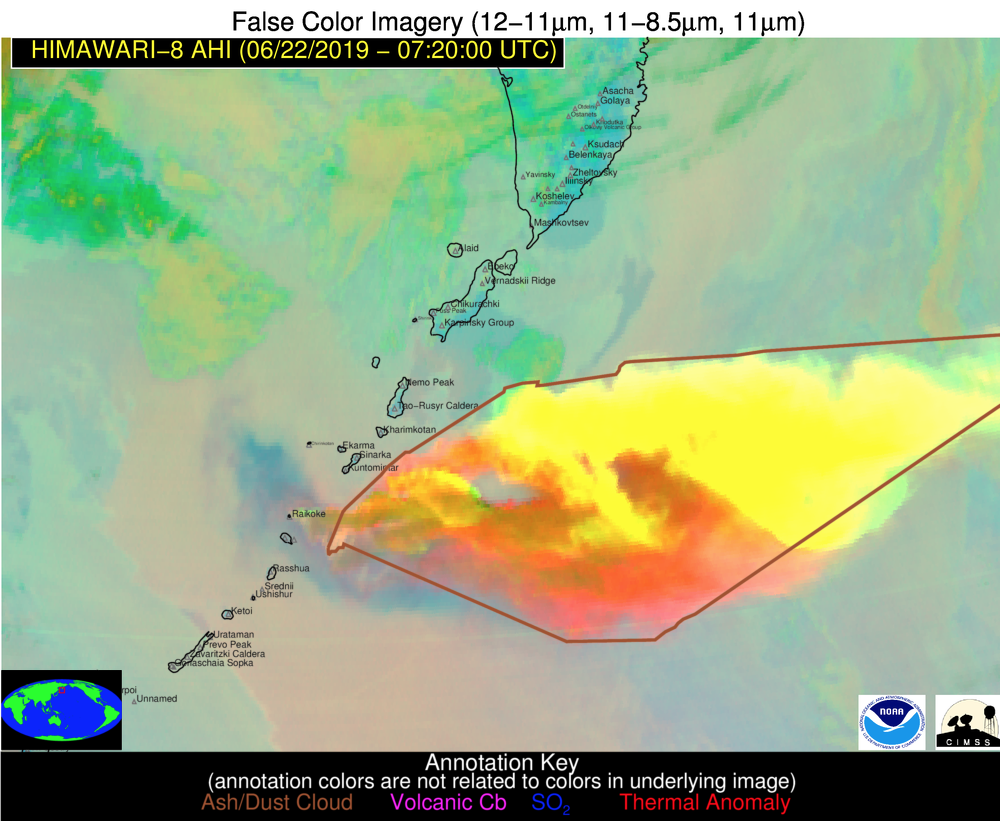 For the first time since 1924, a major eruption of the Raikoke volcano occurred around 1800 UTC on 21 June 2019. Himawari-8 False Color Red-Green-Blue (RGB) images from the NOAA/CIMSS Volcanic Cloud Monitoring site (above) showed — via the brighter yellow areas — that a large portion of the volcanic plume was rich in both ash and sulfur dioxide (SO2). The Tokyo VAAC estimated the maximum ash height to be 43,000 feet (~13 km) above ground level — and CALIPSO CALIOP data indicated a maximum ash height around 12 km shortly after 02 UTC on 22 June (between 45-50º N latitude and 159-161º E longitude).

In a comparison of Himawari-8 Upper-level (6.2 µm), Mid-level (6.9 µm) and Low-level (7.3 µm) Water Vapor images (below), since the 7.3 µm spectral band is also sensitive to SO2 absorption, those images showed a good signature of the leading filament of volcanic SO2 as it was transported east-southeastward over the North Pacific Ocean.

Similarly, the GOES–17 (GOES-West) Low-level Water Vapor (7.3 µm) images also showed the filament of volcanic SO2 that was being drawn into the circulation of a Gale Force Low south of the Aleutian Islands. As a result, the Anchorage VAAC issued aviation Volcanic Ash Advisories that covered large areas of the North Pacific Ocean and southern Bering Sea; they continued to estimate the maximum ash height to be 43,000 feet. Around 16 UTC on 22 June, CALPSO CALIOP data sampled a small portion of the ash at an altitude near 17 km (between 45-50º N latitude, 155-157º W longitude).

VIIRS True Color RGB and Infrared Window (11.45 µm) images from NOAA-20 and Suomi NPP as viewed using RealEarth are shown below at approximately 01 UTC, 02 UTC and 03 UTC on 22 June. The combination of True Color and Infrared imagery indicated that volcanic ash was present a multiple altitudes.

A somewhat less oblique view from the west was provided by the NSMC FY-2G satellite (below).

Himawari-8 “Red” Visible (0.64 µm) images (below) provided another interesting view of the multiple eruption pulses — and since the eruption began around 5 AM local time, long early morning shadows were cast by the initial bursts of tall volcanic clouds. A faster animation revealed shock waves propagating radially outward from the eruption site.

Incidentally, an astronaut aboard the International Space Station took a photo of the volcanic cloud at 2246 UTC on 21 June — and the two Visible images that bracket that time (2240 and 2250 UTC) from GOES-17 and Himawari-8 are shown below. 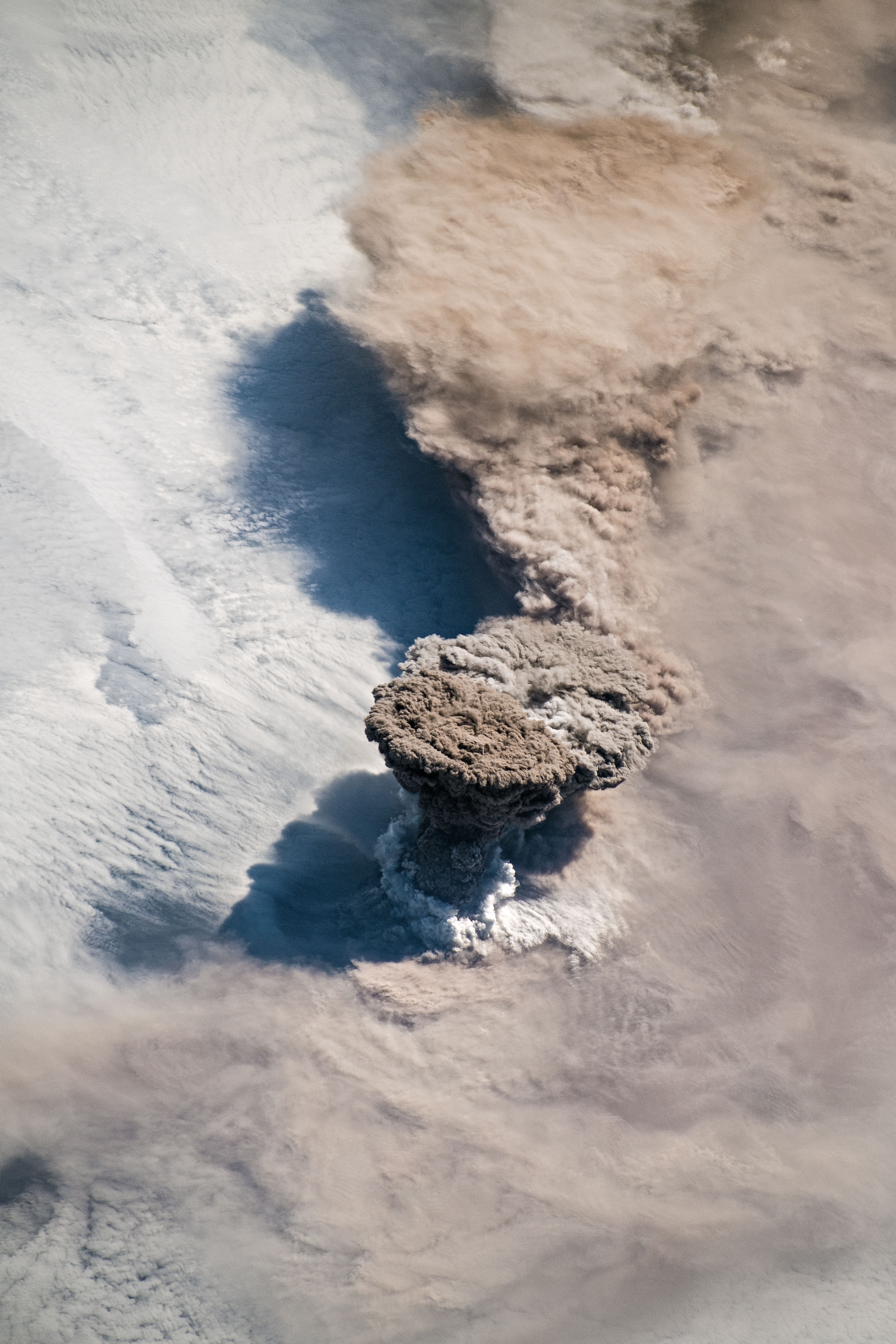 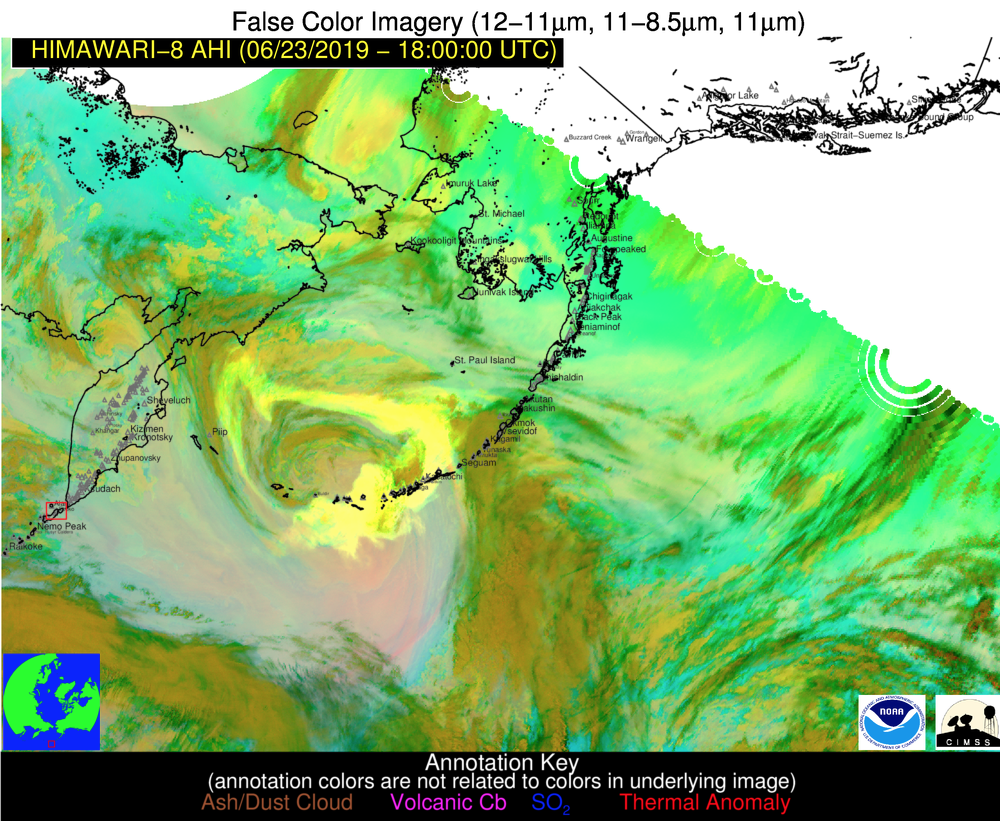 A 2-day animation of 10-minute Himawari-8 False Color images (above) showed the ash- and SO2-rich volcanic plume (brighter shades of yellow) eventually being transported northeastward across the western Aleutian Islands and circulating cyclonically over the Bering Sea. Similarly, this volcanic cloud transport was also seen in the corresponding GOES-17 False Color imagery.

GOES-17 SO2 RGB imagery (above) continued to show a signature of the volcanic cloud (brighter shades of yellow) from the Raikoke eruption over a large portion of the Bering Sea on 24 June. Volcanic ash advisories were issued for flight altitudes as high as 40,000 feet — and a pilot report of SO2 over the Bering Sea at 47,000 feet was received at 1822 UTC (below).

GOES-17 SO2 RGB images (above) showed the persistent signature of the SO2-rich volcanic cloud as much of it remained within the circulation of a quasi-stationary low pressure system in the Bering Sea.

An interesting Pilot Report north of the Aleutians at 36,000 feet (below) noted thin grey-colored layers below the altitude of the aircraft. GOES-17 Air Mass RGB images showed a subtle brown/tan plume — could this have been a thin filament of ash from the Raikoke eruption that was drawn into the circulation of the Bering Sea low?

Another Pilot Report farther to the west at 2119 UTC (below) was close to the southern edge of the GOES-17 SO2 signatures, but no sulphur odor was reported; however, they did note the presence of an apparent ash layer south of Shemya in the western Aleutian Islands.