Sandy’s final day as a hurricane over the Atlantic Ocean

The Full Moon that was exacerbating the high storm tides of Hurricane Sandy also allowed for stunning “night-time visible” imagery on 29 October 2012. A comparison of AWIPS images of Suomi NPP VIIRS 0.7 Âµm Day/Night Band and 11.45 Âµm IR data from shortly after 06 UTC or 2 AM EDT (above) showed the compact convective core of Hurricane Sandy east of Cape Hatteras, near the South Wall of the Gulf Stream. Sea Surface Temperature and Ocean Heat Content products from the CIMSS Tropical Cyclones site (below) indicated that later in the morning (around 12 UTC) the center of Sandy was crossing the axis of the Gulf Stream.

GOES-13 was placed into in Rapid Scan Operations (RSO) mode to monitor Sandy, and 10.7 Âµm IR images (above; click image to play animation) showed several noteworthy aspects to the storm. The sheer size of the storm is quite evident. The cirrus shield of the storm was pushing west through lower Michigan into Wisconsin during the 16-hour time period of the animation. The IR images also showed the pulsing development of convection near the center of the storm, and the northwest motion of the entire system. The cyclonic circulation in the low-level wind field over the ocean and the anticyclonic circulation of the higher level clouds over the eastern United States was also apparent.

A morning overpass of the Metop-A satellite provided Advanced Scatterometer (ASCAT) winds around Sandy (below) — there were a number of wind vectors having speeds of 50 knots or higher (within the area of red wind vectors) in the southern quadrant of the storm. 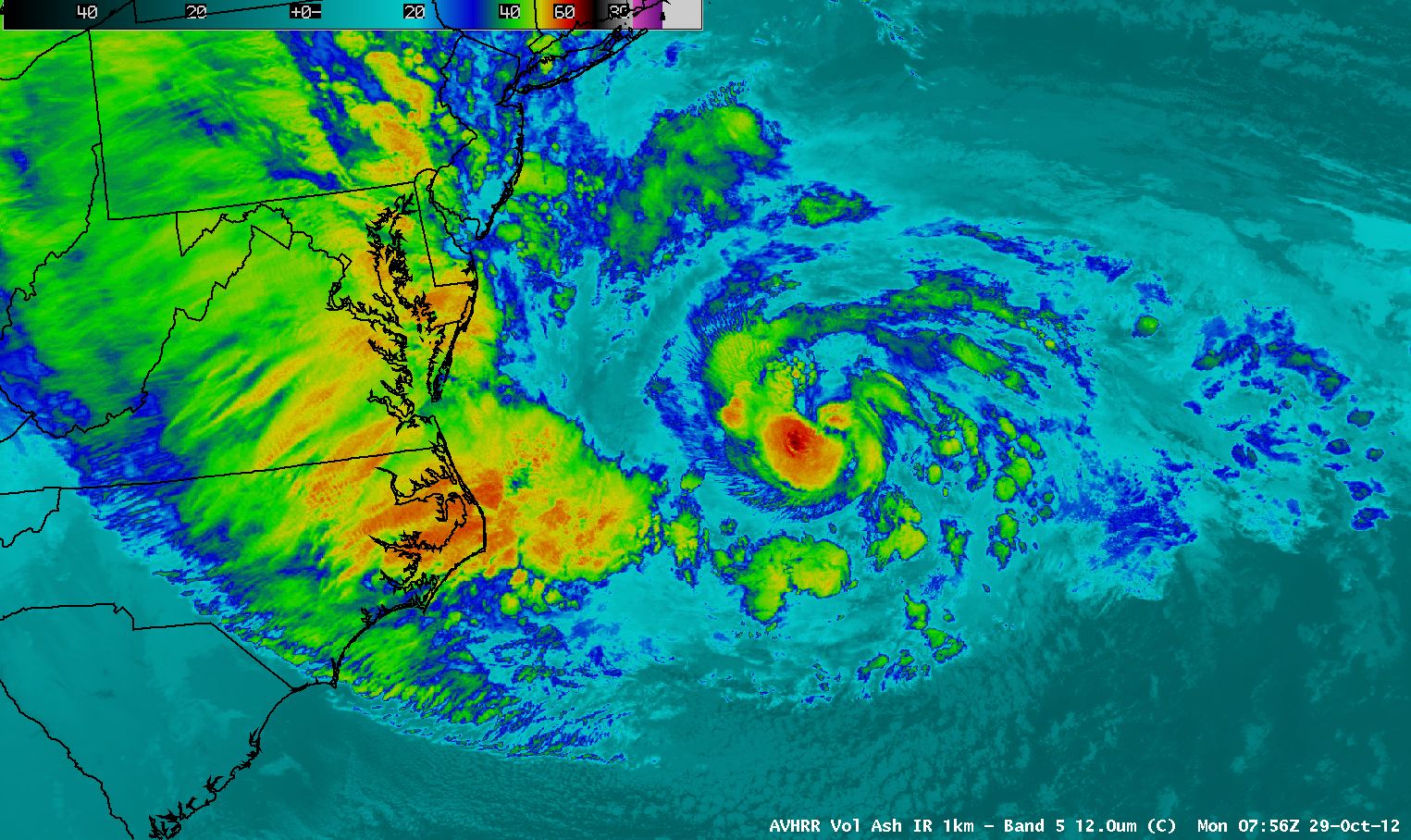 A sequence of 1-km resolution Suomi NPP VIIRS 11.45 Âµm, MODIS 11.0 Âµm, and POES AVHRR 12.0 Âµm IR images (above; click image to play animation) showed the structure of Hurricane Sandy at various times as it curved northwestward toward the US East Coast. Such an animation also serves to underscore the potential value of having access to high spatial resolution polar-orbiting satellite imagery in AWIPS, in the event of an outage of the GOES-East satellite (such as the one that occurred on 23 September 2012). CIMSS has the unique capability to provide such imagery from VIIRS, MODIS, and AVHRR to National Weather Service forecast offices. 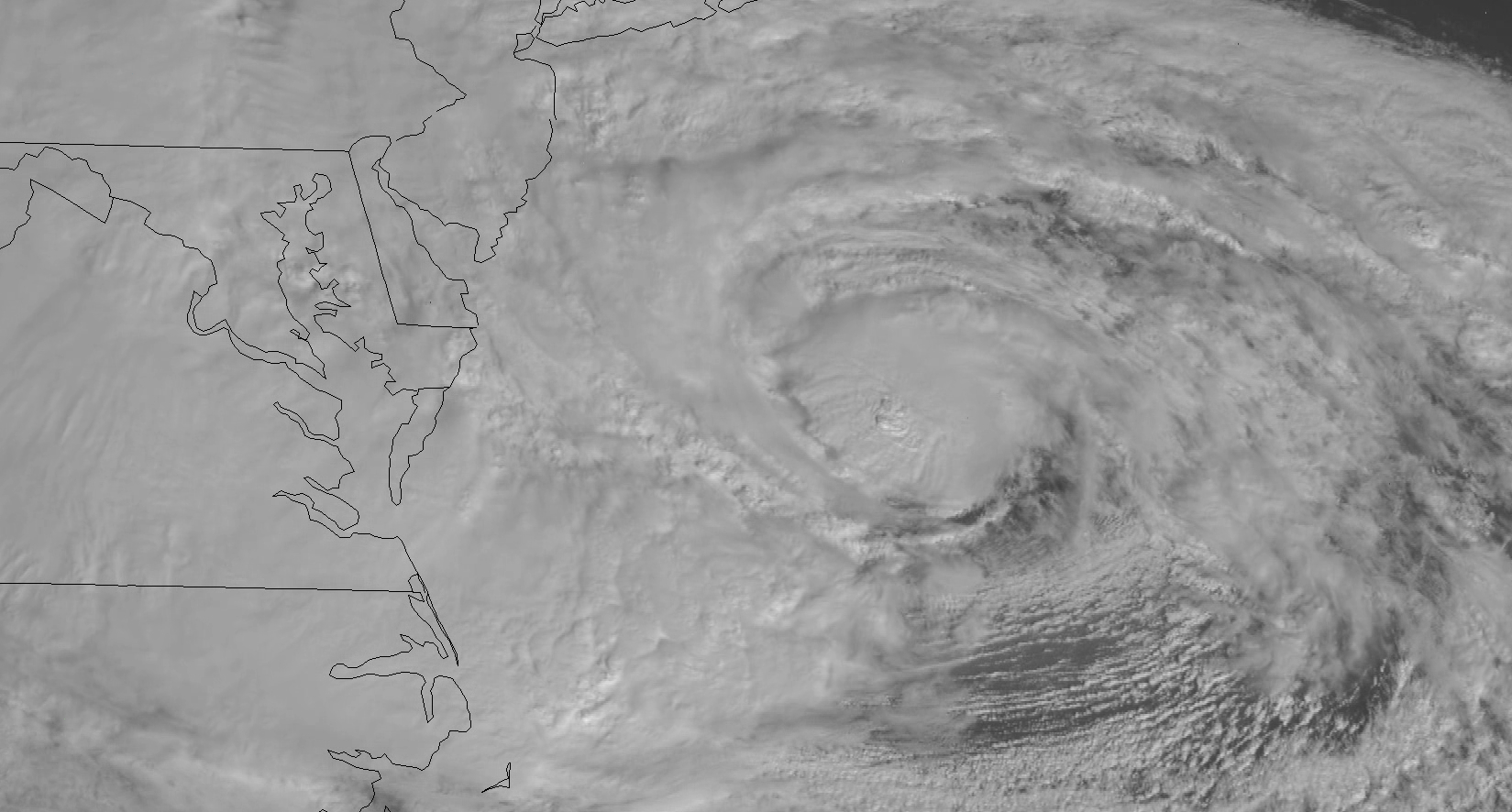 During the daylight hours, GOES-14 Super Rapid Scan 0.63 Âµm visible channel images at 1-minute intervals (above; click image to play HD format QuickTime movie) showed great detail in the complex temporal changes of the structure of the various cloud features associated with Sandy. Note that GOES-14 remained in SRSO-R mode to monitor Sandy, and real-time 1-minute imagery is available here. In addition, a number of GOES-14 SRSO-R animations are available on the SSEC YouTube Channel. 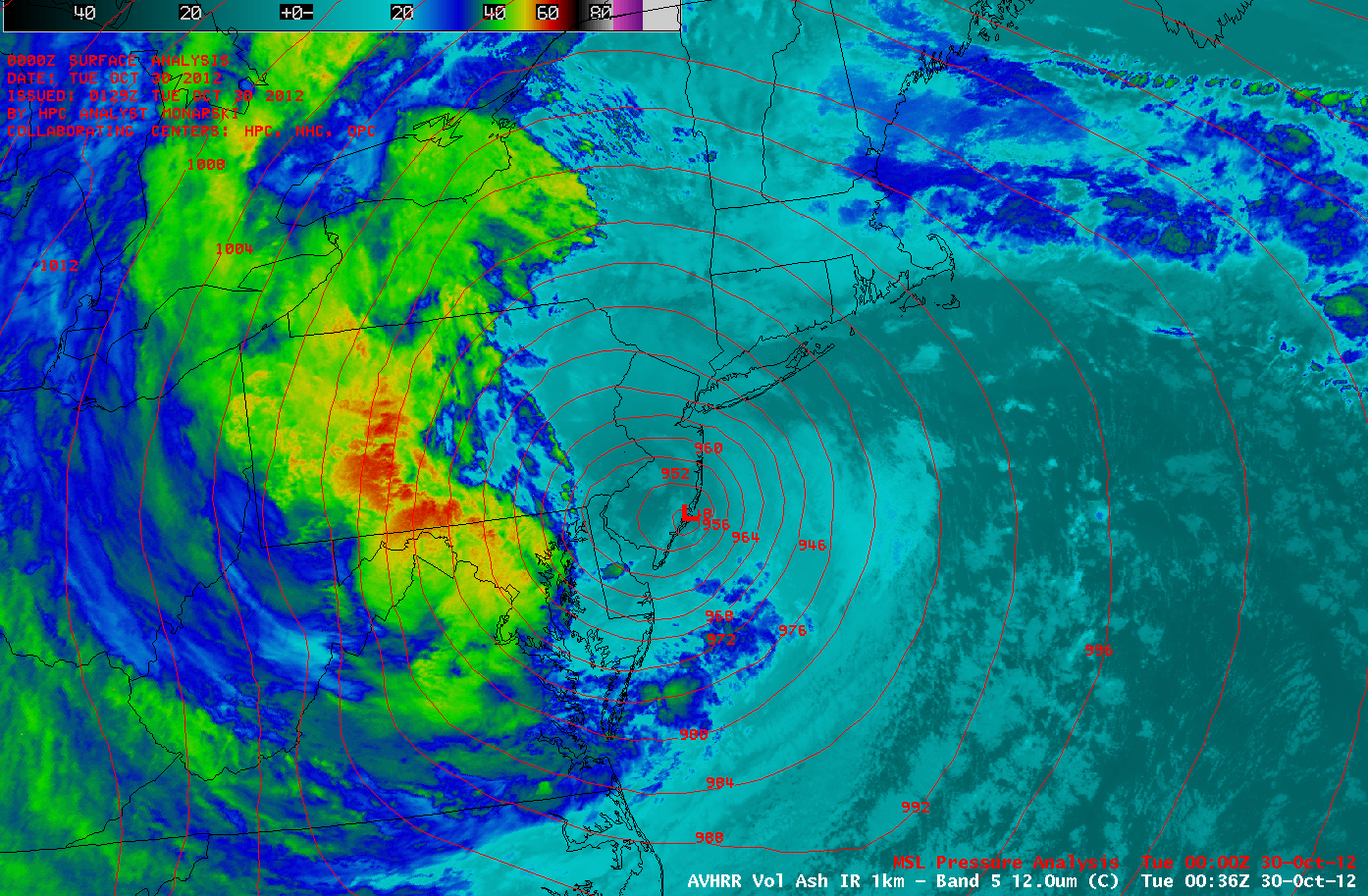 Sandy made landfall as the storm was transitioning from a hurricane to a very intense post-tropical cyclone near Atlantic City, New Jersey around 00:00 UTC on 30 October (NHC advisory archive). A large-scale POES AVHRR 12.0 Âµm IR image is shown above with an overlay of the surface pressure analysis; a closer view is shown below, with surface reports and buoy reports included. The storm produced as much as 12.55 inches of rain and 34 inches of snow in Tennessee, and wind gusts as high as 90 mph in New York and New Jersey (and 145 mph at Mt. Washington, New Hampshire). A listing of significant rainfall, snowfall, and wind gusts can be found in the HPC storm summary. An excellent summary of notable Superstorm Sandy statistics can be found on the Wunderblog site. 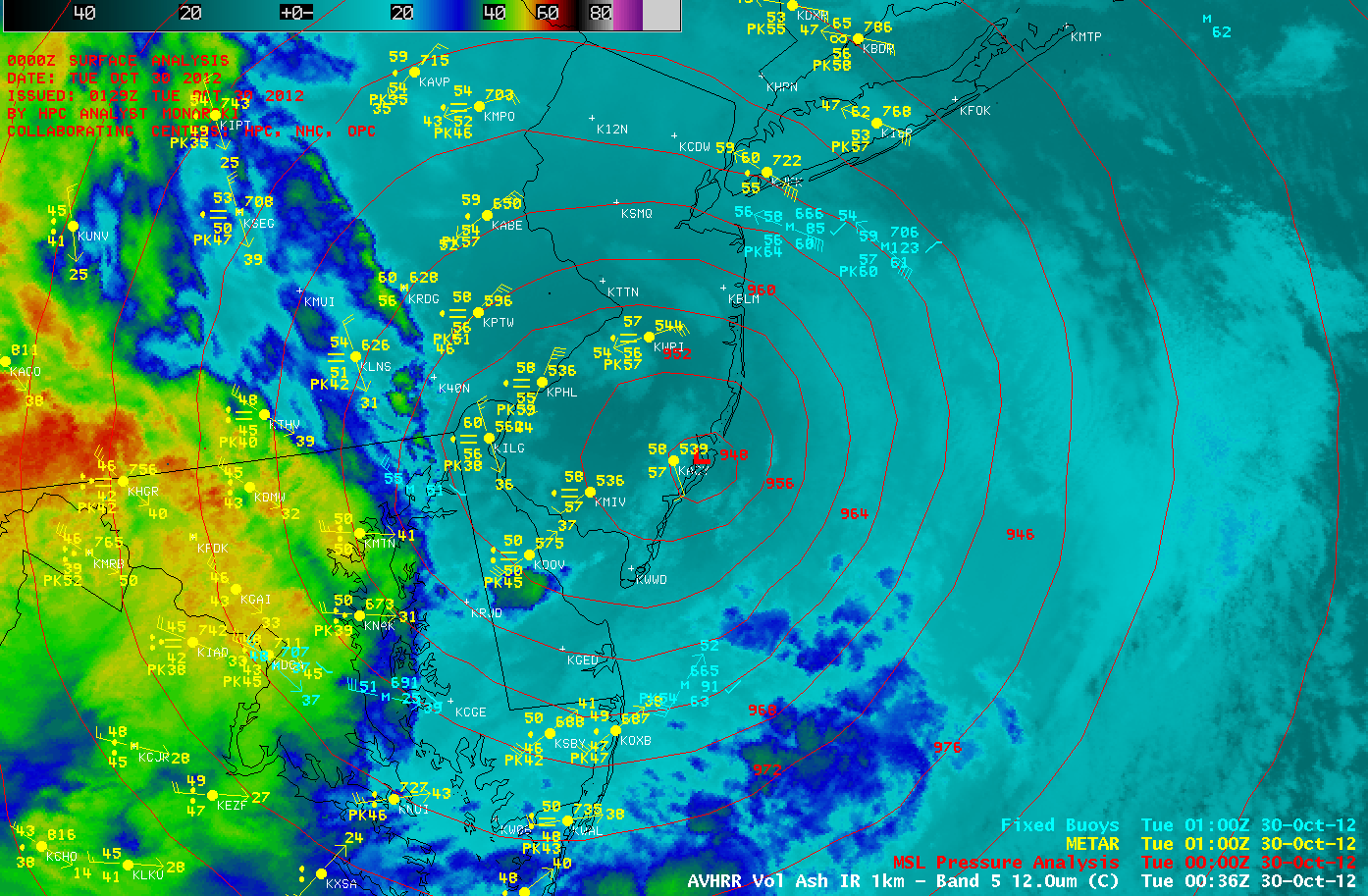 Landfall was also captured by GOES-14 SRSO visible and IR imagery (below; also available as a QuickTimeÂ movie). Landfall occurred after sunset, so infrared imagery was an important analysis tool.

A composite of GOES-14 1-minute interval SRSO-R visible images superimposed on GOES-13 visible images — at standard 15-minute intervals early in the day, and 5-10 minute interval Rapid Scan Operations later in the day –Â  (below; click image to play QuickTime animation, courtesy of Rick Kohrs, SSEC) helps to highlight the value of GOES imagery at more frequent time intervals to study the evolution of complex weather systems. With the next-generation GOES-R satellite, images will be available at 30-second intervals over special mesoscale storm sectors. 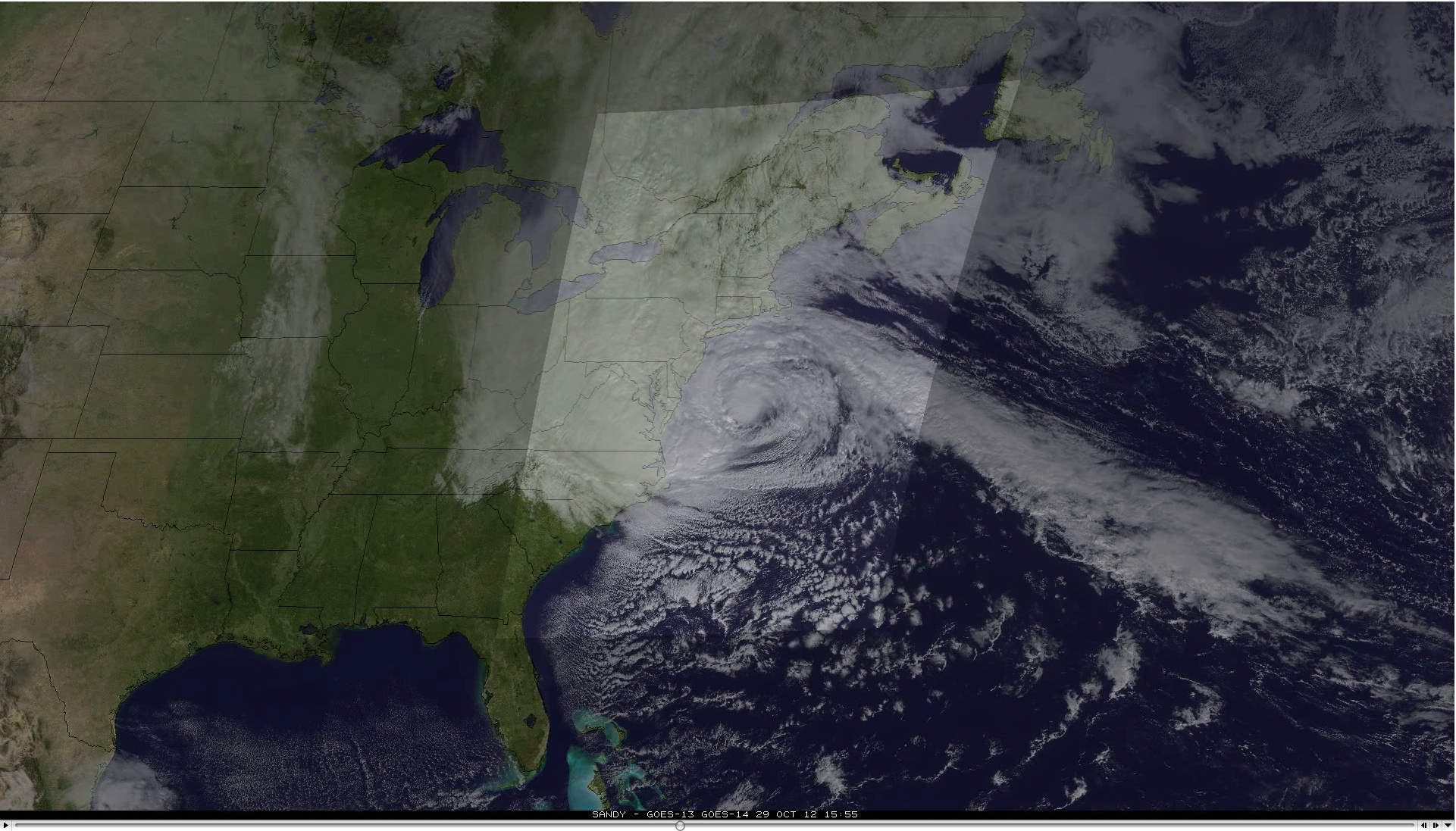