Tropical Depression 2 was upgraded to Tropical Storm Bonnie at 2100 UTC on Saturday 28 May, the second named storm of the 2016 Atlantic Season (Hurricane Alex, which formed in January, was the first named storm). The water vapor animation above shows that Bonnie’s initial spin may be traced to a front associated with an occluded system which crawled through the eastern United States, exiting on about 23 May 2016. It’s not uncommon for vorticity associated with extratropical cyclone fronts to sow the seed of a tropical cyclone, especially early (or late) in the season. In this case, the cold front failed to pass Bermuda, and by 27 May, persistent thunderstorms about halfway between Bermuda and the Bahamas suggested tropical cyclogenesis was underway (GOES-13 visible image animations: 26 May | 27 May).

Total Precipitable Water fields from the microwave MIMIC product, above, show the system was embedded deep within tropical moisture (24-26 May animation). Tropical moisture associated with the storm moved up the east coast of the United States into the mid-Atlantic States with local flooding reported. This longer animation (from 21 through 28 May) shows that persistent westward motion of moisture occurred over the tropical Atlantic well in advance of Bonnie’s formation.

Rapidscat Scatterometer Winds, 1012 UTC on 27 May [click to enlarge]

The tropical wave that produced Bonnie showed a closed circulation as early as 1012 UTC on 27 May according to Rapidscat scatterometer winds, above, and MODIS Sea Surface Temperatures, below, showed very warm water (with SST values of 80º F) over the Gulf Stream. 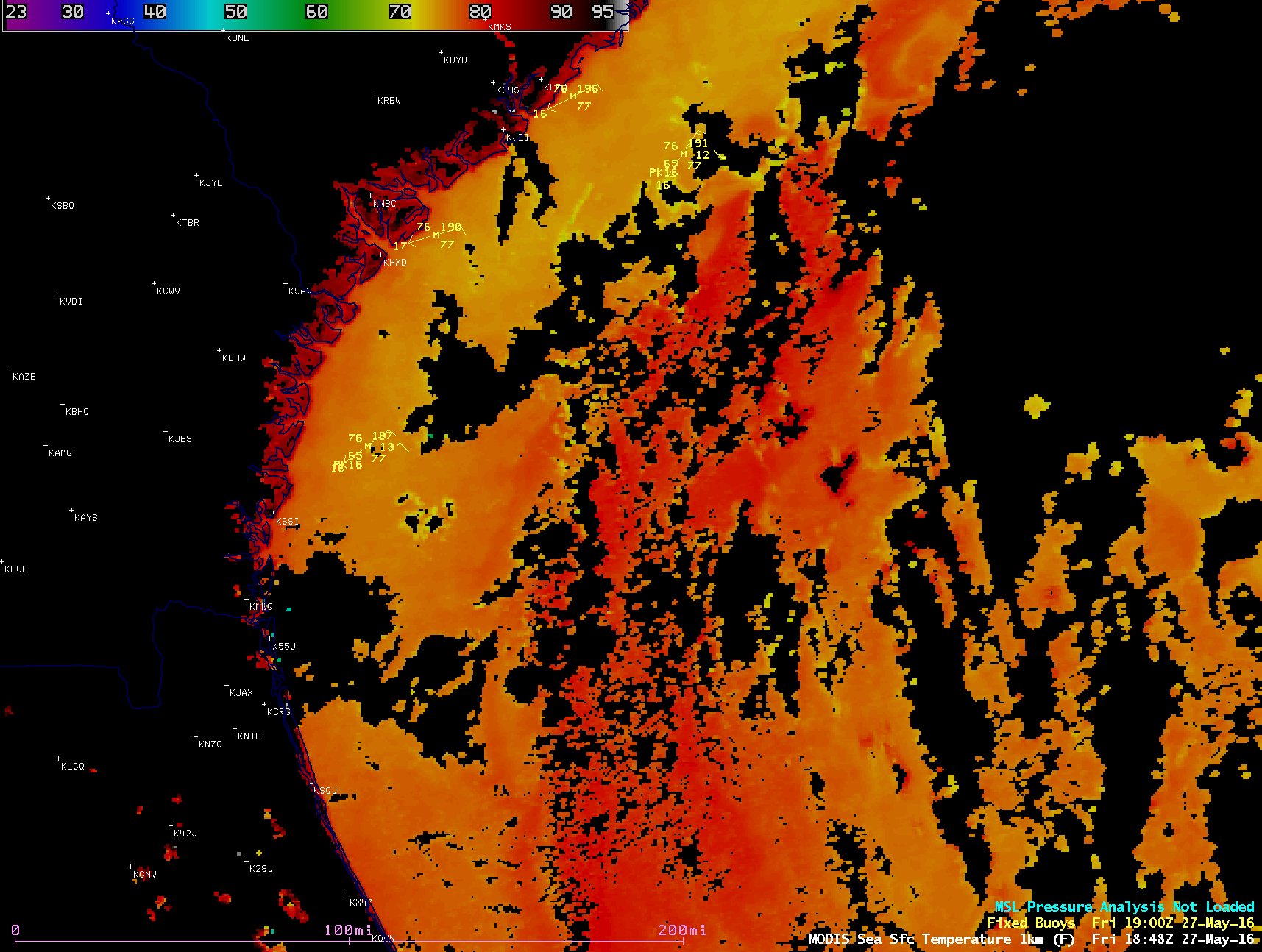 MODIS-based Sea Surface Temperatures, 1848 UTC on 27 May [click to enlarge]

Suomi NPP overflew this tropical system at various times during its lifecycle. Shortly after midnight on 27 May 2016, above, strong convection was centered just north of the apparent surface circulation (as inferred by the curved bands of low-level clouds, clouds made visible by moonlight in the night-time VIIRS Day/Night Band visible imagery). Twenty-four hours later, at 0742 UTC on 28 May, below, in a more zoomed-in view, the (then) Tropical Depression Number 2 is supporting strong convection that is obscuring the low-level circulation center.

Finally, at 0723 UTC on 29 May, (above) after strong wind shear has displaced all convection well north of the center, the low-level circulation of Tropical Storm Bonnie is southeast of the South Carolina Coast. Strong convection is over North Carolina. This shear was noted in the 0300 UTC and 0900 UTC (29 May) Discussions from the National Hurricane Center. The effect of shear is apparent in the two GOES-13 Infrared Images below, from 2045 UTC on 28 May when convection was close to the center, and from 1045 UTC on 29 May, shortly before landfall, when convection was stripped from the center and displaced well to the north.

Closer views of the sheared system on 28 May can be seen on 1906 UTC VIIRS and 1937 UTC AVHRR Visible and Infrared images, as well as a GOES-13 Visible animation.

The remnant circulation of Bonnie moved very slowly northeastward during the 30 May – 01 June period, as seen in GOES-13 Visible (0.63 µm) images covering each of those 3 days (above; also available as a large 95 Mbyte animated GIF). The periodic formation of deep convective clusters continued to produce heavy rainfall over parts of far eastern North and South Carolina.

On the morning of 01 June, an overpass of the Metop-B ASCAT instrument sampled the flow around the low-level circulation center (LLCC) off the coast of North Carolina; several hours later, Suomi NPP VIIRS Visible (0.64 µm) and Infrared Window (11.45 µm) images provided a high-resolution view of the system at 1755 UTC (below). Cloud-top IR brightness temperatures were as cold as -78º C within the small convective cluster located just north of the LLCC.