Subtropical Storm Alex (NHC advisory archive) formed in the far eastern Atlantic Ocean on 13 January 2016. Animations of GOES-13 (GOES-East) 0.63 µm Visible (above) and 10.7 µm Infrared images (below) showed the initial evolution and northeastward motion of the storm. Alex is only the 4th known January tropical or subtropical storm to have formed in the Atlantic since the historical record began in 1851.

A comparison of Suomi NPP VIIRS Infrared (11.45 µm) and Day/Night Band (0.7 µm) images at 0320 UTC (below) showed the well-defined eye of Alex. With the Moon in the Waxing Crescent phase (at 30% of Full) there was enough illumination to demonstrate the “visible image at night” capability of the Day/Night Band. A magnified version of the Infrared image showing the eye can be seen here.

As of 15 UTC on 14 January, Alex had made the transition from subtropical storm to Category 1 hurricane (eastern Atlantic Ocean surface analyses). GOES-13 Infrared (10.7 µm) images (below) showed the well-defined eye that had formed. Alex became the first known hurricane to form in the Atlantic Ocean since 1938, and only the second hurricane on record to from north of 30ºN latitude and east of 30ºW longitude. 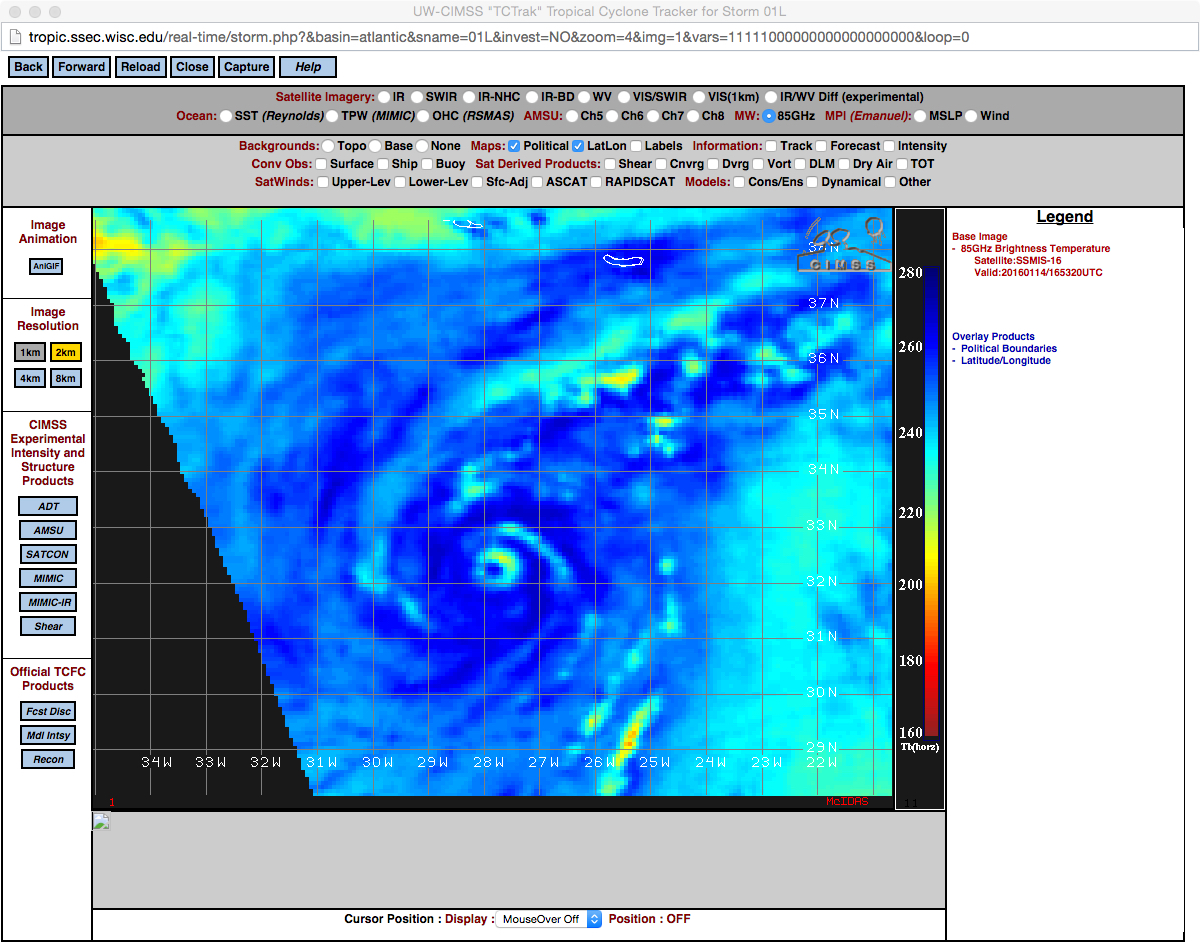 While still classified as a hurricane, Alex was undergoing a weakening trend as it approached the Azores Islands during the early morning hours on 15 January. GOES-13 Infrared (10.7 µm) images (below) showed a strong convective band that produced a brief period of heavy rain at Ponta Delgata and Lajes Acores several hours prior to the passage of the eye of Alex (which occurred in the 11-14 UTC time frame — and Alex was downgraded at that point to a Tropical Storm). At Ponta Delgata a peak wind gust of 50 knots was recorded at 1130 UTC.

ISS-Rapidscat surface scatterometer winds (below) showed the center of circulation of Alex just south of the Azores Islands at 1118 UTC. 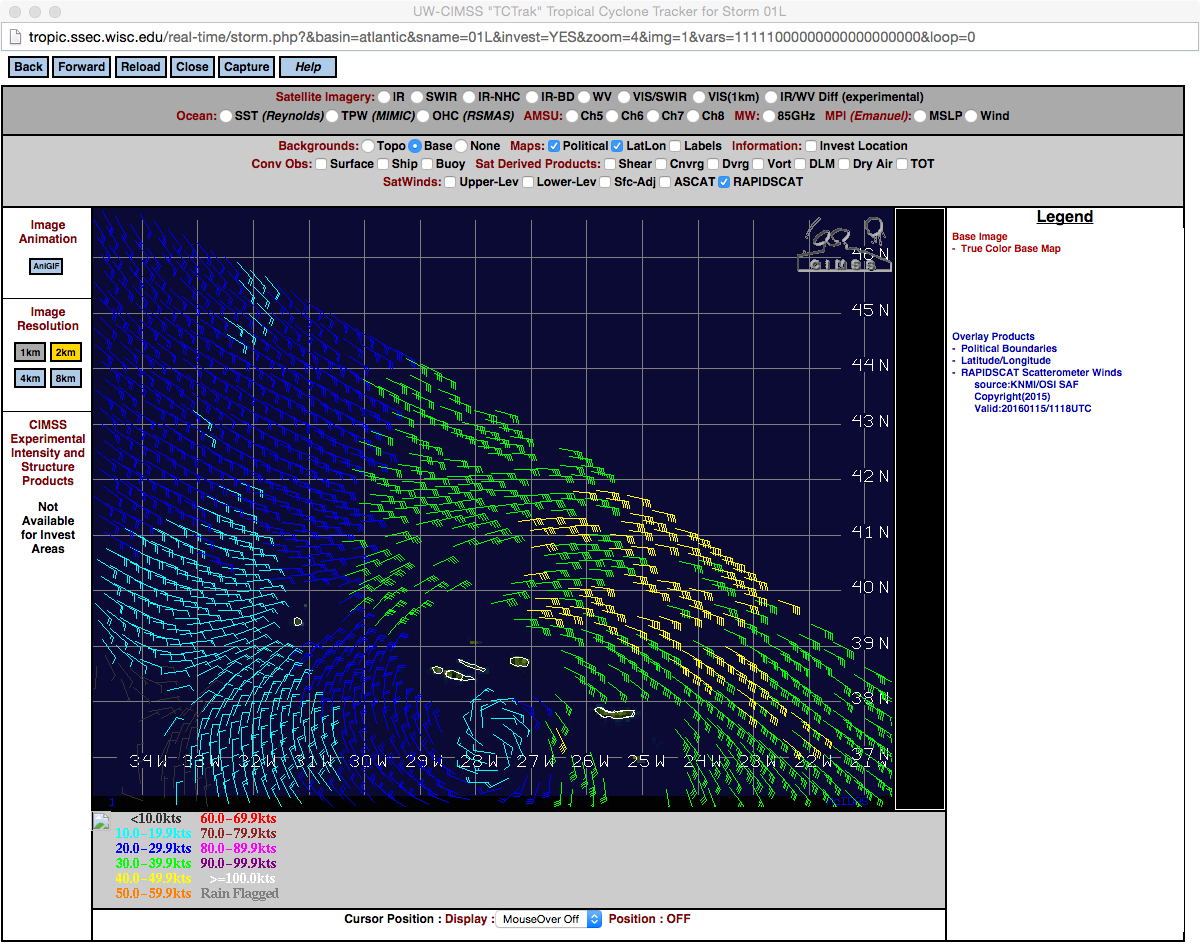 Using a long animation of GOES-13 Water Vapor (6.5 µm) images covering the 06-16 January period (below; also available as a large 165-Mbyte animated gif), the origination of Hurricane Alex could be traced back to a strong baroclinic mid-latitude cyclone that rapidly intensified off the southeast coast of the US on 07 January.

The origin and motion of Alex could also be identified using the satellite-derived atmospheric motion vector 850 hPa Relative Vorticity product (below). A region of lower-tropospheric vorticity over Cuba on 06 January began moving northeastward across the Bahamas, then eastward across the Atlantic Ocean on 07 January. 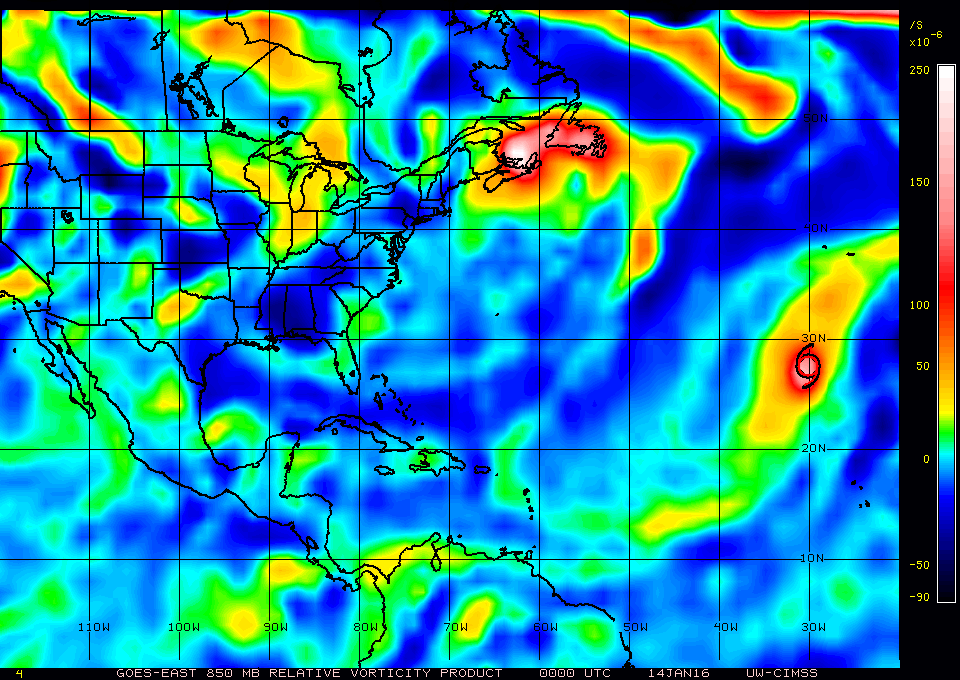 For another perspective on the history of the development of Alex, see this article from The Weather Channel.