Several days before the largest hailstone on record in the US fell in central South Dakota, McIDAS images of 4-km resolution GOES-13 10.7 µm IR data (above) showed a cluster of severe thunderstorms that propagated southeastward across far northwestern South Dakota on 19 July 2010. From a satellite perspective, this convection did not appear to be unusually intense in terms of cold IR cloud top brightness temperatures (only as cold as -63º C, darker red color enhancement) or any “enhanced-V” or other typical severe storm top signatures, but it nonetheless produced a long-duration wind and hail event that resulted in a remarkably long and wide hail damage path.

This wind-driven hail damage path can be seen on the comparison of three 250-meter resolution MODIS true color Red/Green/Blue (RGB) images (created using bands 4/3/1) from 15 July (4 days before the event), 20 July (one day after the event), and 25 July (6 days after the event) acquired from the SSEC MODIS Today site. The hail damage swath appears as the distinct broad tan-colored feature that is oriented from northwest to southeast. According to the SPC Storm Reports, the largest hail size was 2.50 inches in diameter, and the maximum wind gust was 70 mph in that particular region. However, a number of the storm reports mentioned a wind-driven hail duration of 15-30 minutes, which exacerbated the crop damage. One storm report mentioned “1150 acres of corn stripped”.

According to Matt Bunkers (SOO at the NWS forecast office at Rapid City SD), this event "started with two HP supercells across southeastern Montana which then merged into a bow echo across western South Dakota". These 2 distinct storms in southeastern Montana show up with better clarity on the 1-km resolution NOAA-18 10.8 µm IR image compared to the 4-km resolution GOES-13 10.7 µm IR image (below). The cloud-top IR brightness temperatures are also significantly colder on the NOAA-18 image (-61º C) than on the GOES-13 image (-52“ C). 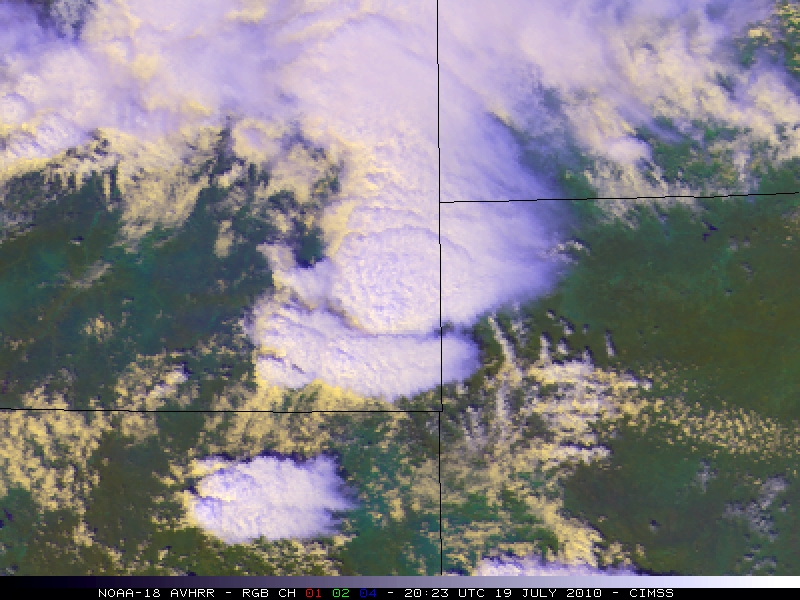