GOES-14 remained in Super Rapid Scan Operations for GOES-R (SRSO-R) demonstration mode on 21 May 2015, providing 1-minute images for much of the eastern US (see this blog post) — and another interesting feature was seen over eastern Tennessee that was rather perplexing. Since this easily qualified for the “What the heck is this?” blog category, we thought it might be fun to have a contest of sorts and invite readers to submit their wild guesses and/or educated explanations. We will post more imagery later in the day on 22 May as to our explanation — but in the meantime, leave a comment on the blog (comments are moderated, so they will not appear until approved), or send your thoughts to our Twitter account.

Thanks to all who submitted their suggestions here and on Twitter of an explanation of the “What the heck is this” feature; Here is our best guess: 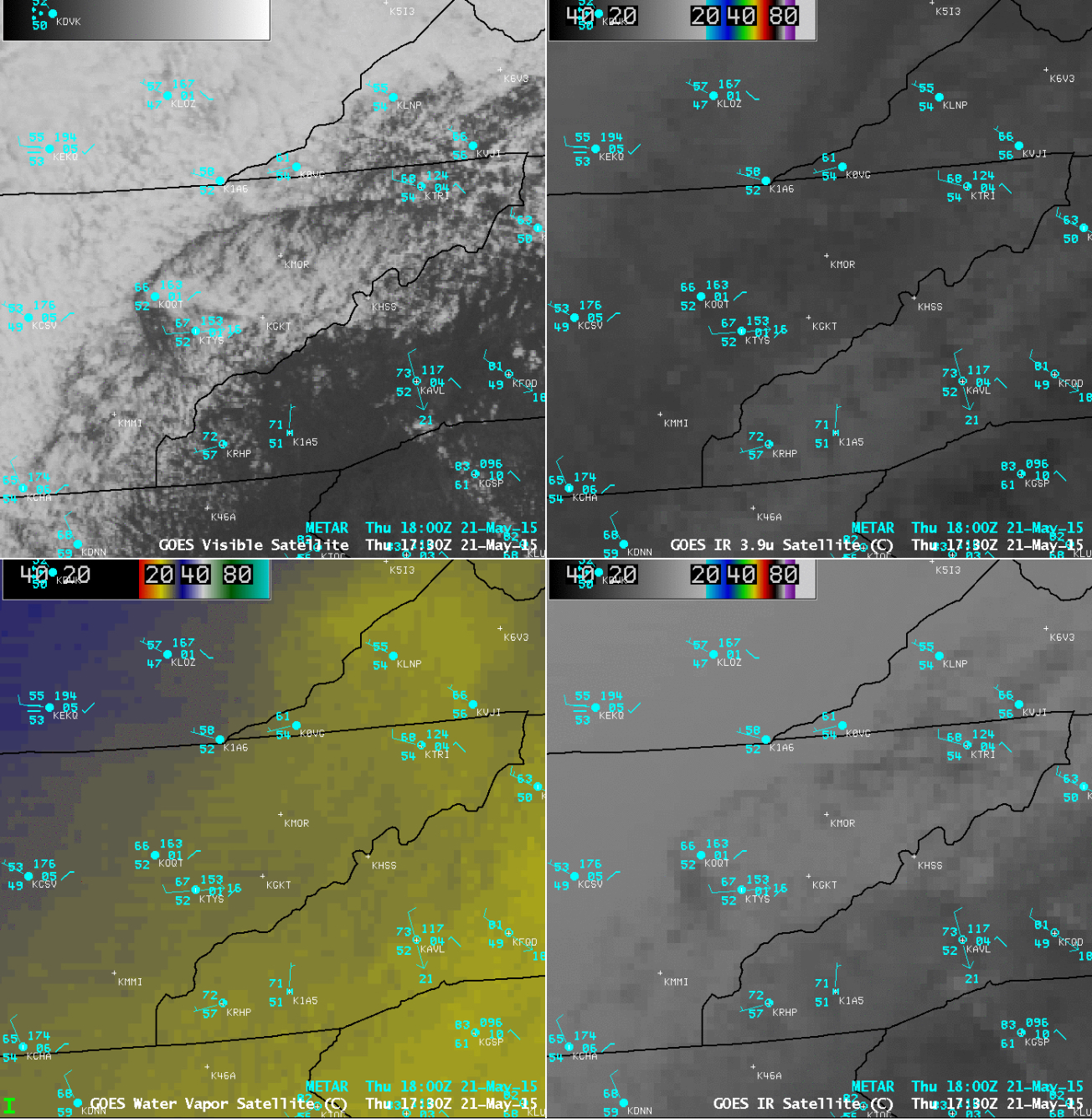 The first step in trying to understand what might be causing this interesting feature was to examine 4-panel images showing imagery from other GOES channels (or spectral bands): in this case, the 3.9 µm “shortwave IR” channel, the 6.5 µm “water vapor” channel, and the 10.7 µm “IR window channel” (above; click image to play animation). The 3.9 µm IR brightness temperatures of cloud features were in the +20 to +25º range, while the 10.7 µm IR brightness temperatures were in the +3 to +5º C range — the significantly warmer shortwave IR temperatures indicates that the clouds were comprised of liquid or supercooled cloud droplets. Otherwise, no significant clues were seen on the IR (or the water vapor) images.

However, the METAR surface reports offer an important clue: a rain shower moved from southwest to northeast through the region during the preceding overnight hours with the passage of a weak low pressure system (surface analyses), with Knoxville (station identifier KTYS) receiving 0.23″ and Oak Ridge (KOQT) receiving 0.10″ of rainfall (radar-estimated 24-hour precipitation). Therefore, one plausible explanation of the feature seen on visible imagery is that it was a shallow pool of stable, rain-cooled air near the surface that was spreading out and flowing downslope (westward) into the Great Valley of East Tennessee during the morning and early afternoon hours.

While the outer edges of this rain-cooled stable air feature remained generally cloud-free, the inner core exhibited a good deal of cloud development (including what appeared to be a more dense northwest-to-southeast oriented cloud band through the middle). An overlay of hourly RTMA surface winds (below; click image to play animation) indicated that there was convergence within the feature (to the lee of higher terrain within the Cumberland Plateau), which along with daytime heating of the moist soil would have helped to promote such shallow cloud development. 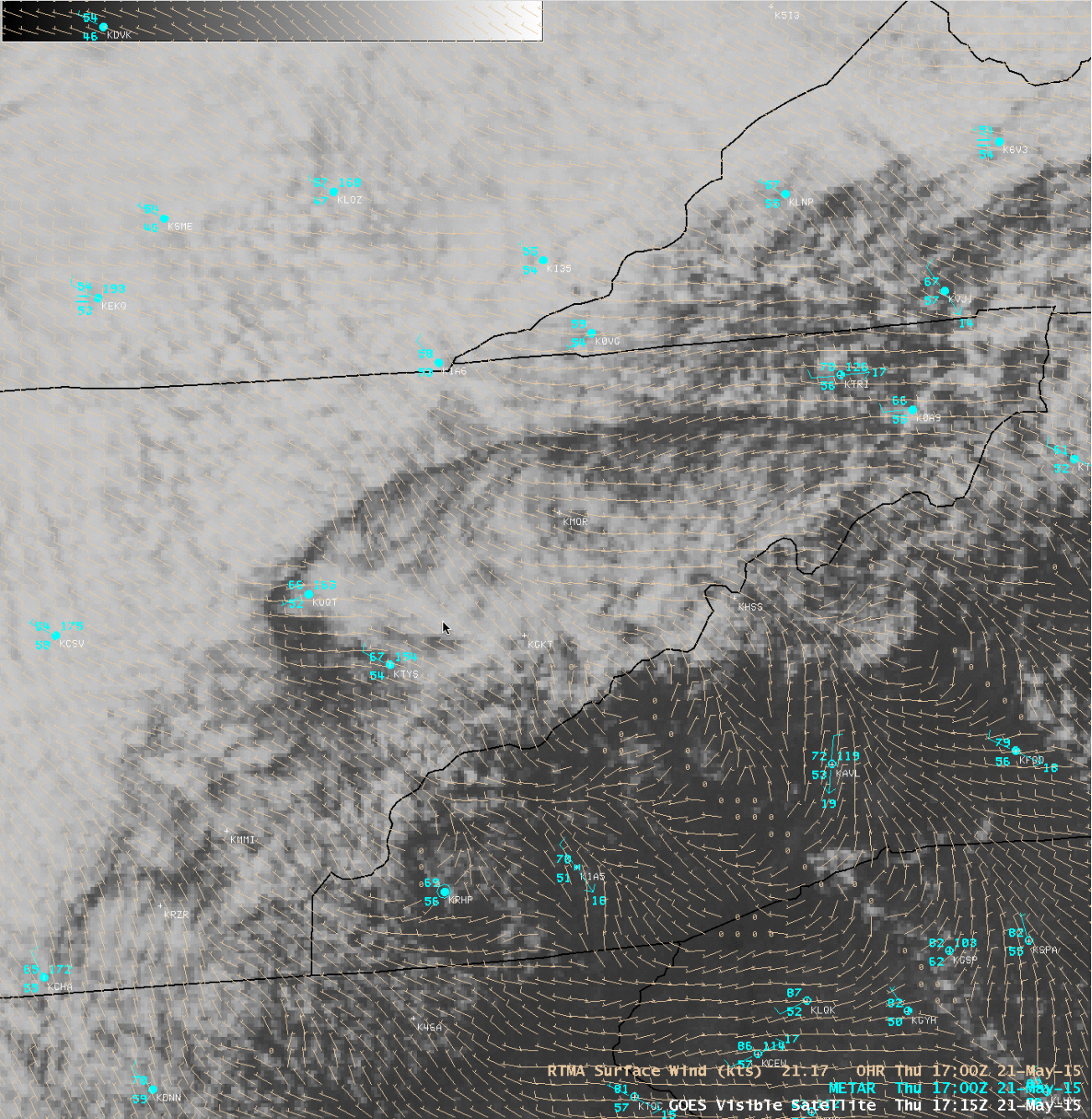 For clouds within expanding the rain-cooled boundary at 1534 UTC, the CLAVR-x POES AVHRR Cloud Type was liquid, with Cloud Top Height values of 1-3 km and Cloud Top Temperature values of +2 to +10º C (below).

Categories: AVHRR, CLAVR-x, General interpretation, GOES-14, POES, What the heck is this?, YouTube