Hurricane Gustav underwent a period of rapid intensification during the daytime hours on 30 August 2008 (as seen on a plot of the CIMSS Advanced Dvorak Technique), reaching Category 4 intensity. AWIPS images of the GOES-12 10.7 Âµm IR channel (above) revealed an impressive eye structure on 30 August, which subsequently degraded in appearance on 31 August (as Gustav’s interaction with Cuba apparently took a toll on the tropical cyclone). Large-format IR animations are also available: 32 MB Animated GIF | 16MB QuickTime movie.

High-resolution atmospheric motion vectors (AMVs) produced once per hour (below) showed the well-defined upper-tropospheric outflow within the northern semi-circle of the storm as it crossed Cuba and moved into the Gulf of Mexico. The upper-tropospheric winds associated with Tropical Storm Hanna could also be seen farther to the east, over the Atlantic Ocean.

On 31 August, early morning QuikSCAT data showed the broad wind field associated with the Category 3 storm, while a late-morning AWIPS image of the 1-km resolution MODIS 11.0 Âµm IR channel data (below) revealed a subtle hint of an eye structure with a ring of colder clouds at 16:34 UTC — cloud top brightness temperature values at that time were as cold as -87Âº C (darker purple enhancement). 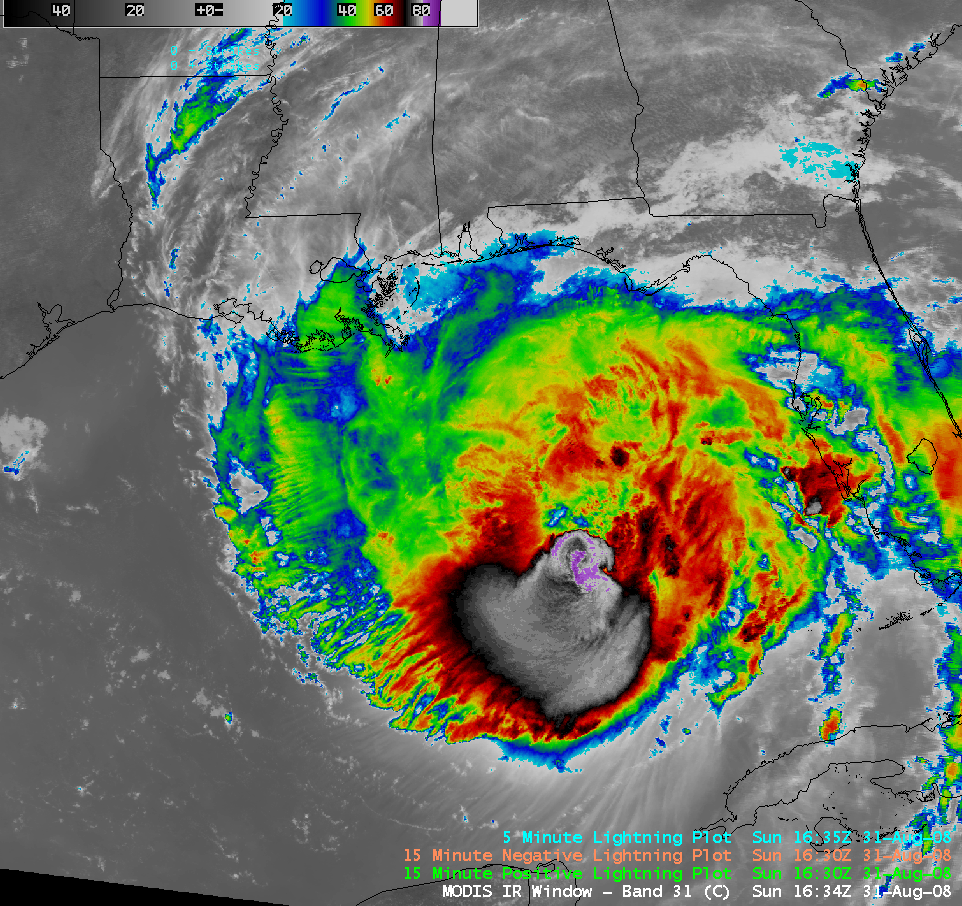 During the remainder of the day on 31 August, there was some evidence of an eye structure on polar-orbiting satellite (POES) microwave imagery, even though no eye was obvious on conventional geostationary satellite (GOES) visible or IR imagery (below, courtesy of the CIMSS Tropical Cyclones site).

Gustav eventually made landfall in Louisiana as a strong Category 2 hurricane on 01 September 2008 (below).