The standing wave feature was also apparent in Himawari-8 “Clean” Infrared Window (10.4 µm) images (below). The abrupt warming of cloud-top infrared brightness temperatures associated with the wave suggests that subsidence was lowering the cloud height. Also note the very cold cloud-top temperatures of -90ºC and colder (yellow pixels embedded within the darker purple enhancement) — this was colder than the tropopause temperature on 12 UTC rawinsonde data from both Nadi, Fiji (NFFN) to the southwest and Pago Pago, American Samoa (NSTU) to the northeast (the wave feature was located closer to the Nadi sounding).

Consecutive VIIRS Infrared Window (11.45 µm) images from Suomi NPP and NOAA-20, as viewed using RealEarth (below) showed a definitive bore-like structure with the wave, especially along the northern end.

Himawari-8 “Red” Visible (0.64 µm) images (below) showed the feature during daylight hours — a distinct shadow was being cast during local sunrise, which indicated a sharp drop-off in cloud height from east to west along the wave.

A HWRF-P model sounding for the latitude/longitude point 15.42ºS/179.75ºW valid at 18 UTC (source) showed directional wind shear at the 450 hPa pressure level — such a wind shear could have acted to initiate a horizontal roll circulation, creating a narrow zone of cloud-eroding subsidence. In addition, a sharp change in wind direction was seen above 150 hPa on the Paga Pago sounding — and the Nadi sounding showed speed shear with height — which also could have induced a horizontal roll circulation within the upper troposphere. 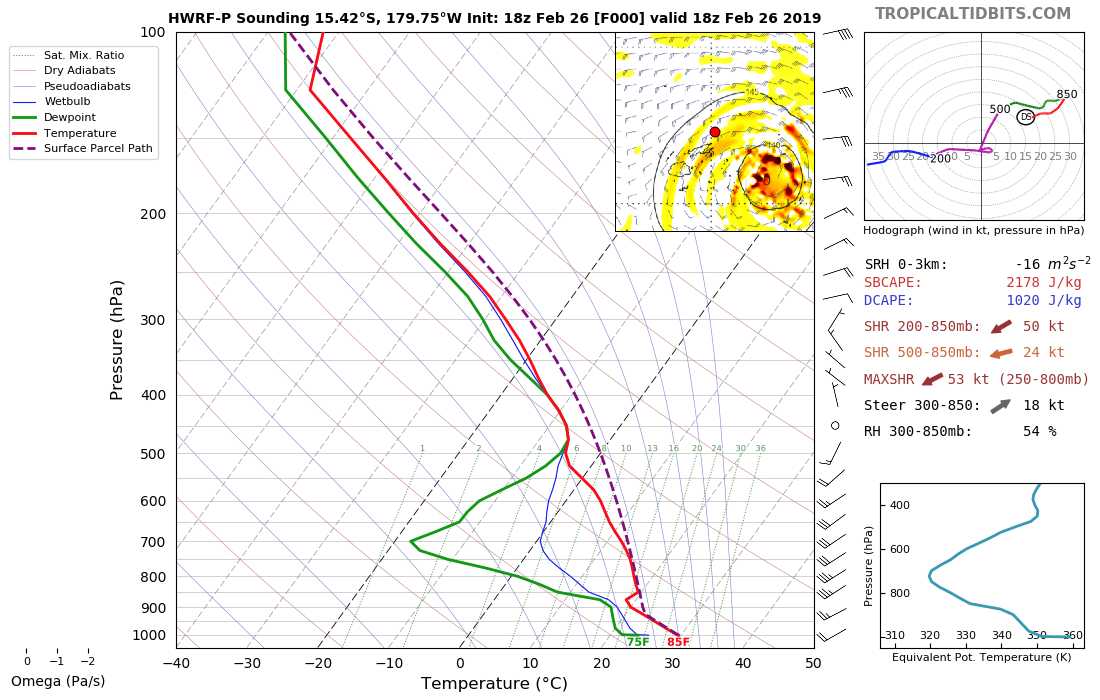 An interesting phenomenon was the apparent “shedding” of high-altitude cloud material from the higher/colder cloud canopy of Pola immediately east of the wave feature, as seen in Himawari-8 Shortwave Infrared (3.9 µm) images (below). The westward direction and velocity of this cloud material motion had good agreement with GFS model winds at 150 hPa. Note that this shed cloud material appeared warmer (darker gray) in the 3.9 µm imagery — the shearing of cirrus cloud may have acted to fracture the ice crystals, making them smaller in size and therefore more efficient reflectors of incoming solar radiation.

A toggle between GOES-17 (GOES-West) Infrared and Water Vapor images from the CIMSS Tropical Cyclones site (below) showed that the feature was aligned with a couplet of low-level convergence and upper-level divergence at 15 UTC — such an environment could also support a vertically-propagating gravity wave.

GOES-17 Infrared and Water Vapor images, with contours of low-level convergence and upper-level divergence at 15 UTC [click to enlarge]

Another analysis of this feature is available from the Australian Bureau of Meteorology Training Centre.