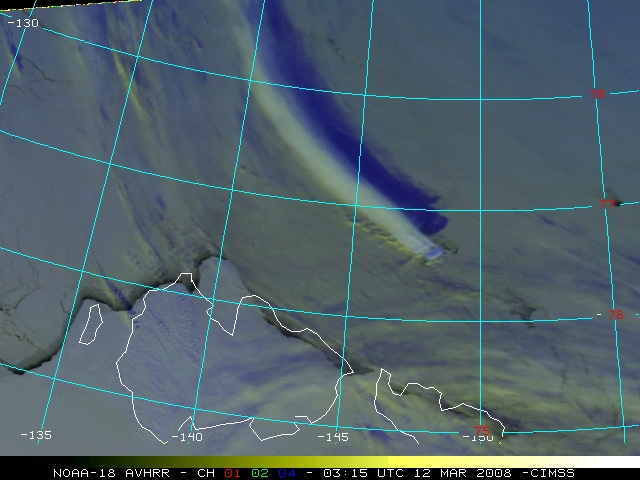 A large number of similar “plume features” have been detected on polar-orbiting satellite imagery in that same region since the 1970s and 1980s, but the explanation for their cause and composition (volcanic ash? methane plume? secret Soviet nuclear weapons testing?) remained elusive until aircraft studies in the 1990s determined that they were orographically-induced cloud plumes, enhanced by a vertically propagating mountain wave (Reference #1 | Reference #2). 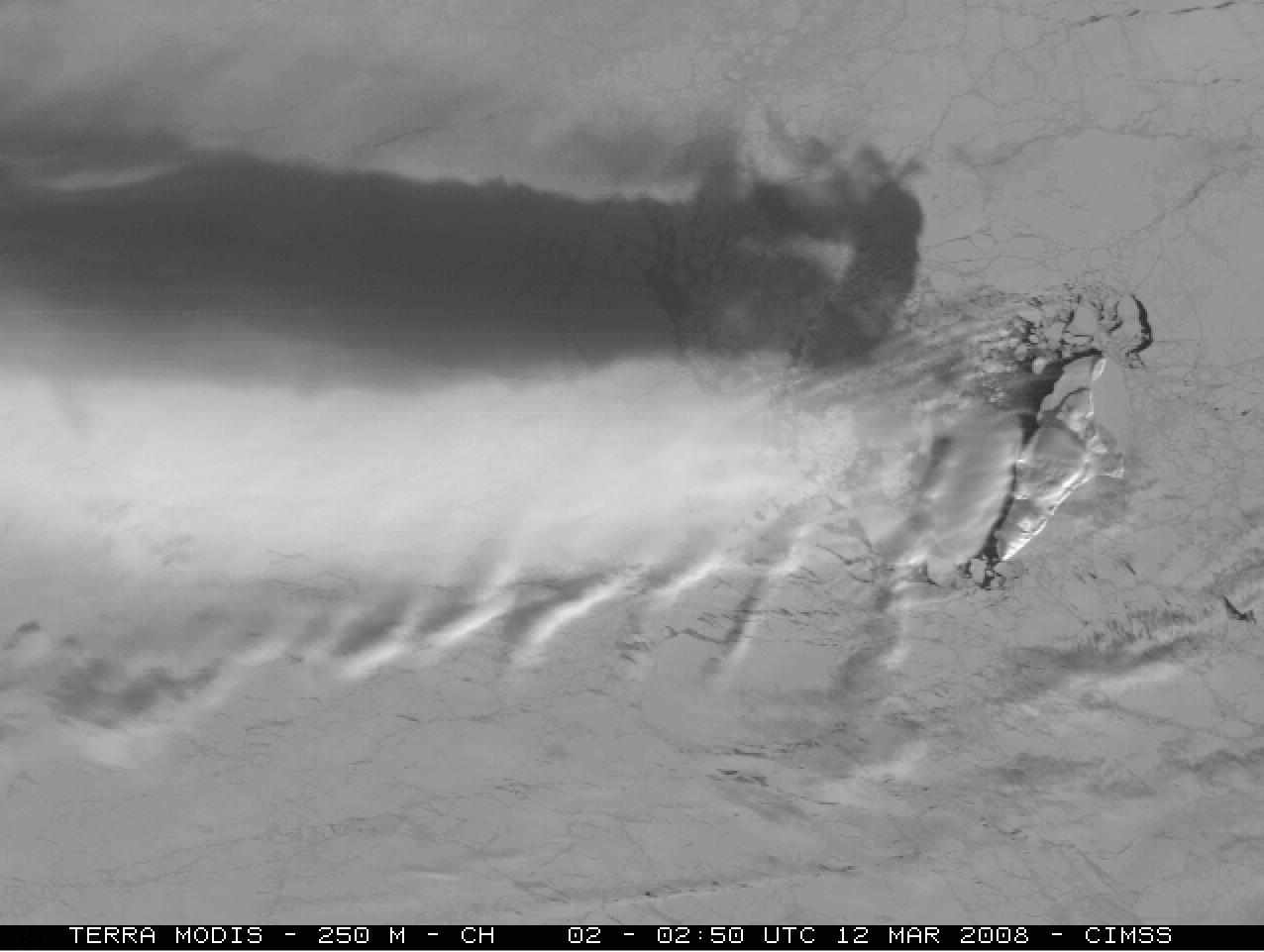 A 250-meter resolution Terra MODIS visible image (above) shows a closer view of Bennett Island and the source of the cloud plume (note that this satellite image is not re-mapped, so the top of the image is oriented toward the northeast). You can also see that there is a polynya — an area of open water — just to the lee (northwest, or left) of the island; could this warm water have served as a source of low-level instability to help initiate vertical motions that contributed to the cloud plume formation?

A comparison of the five 1-km resolution NOAA-18 AVHRR channels (above) revealed several important points: (1) the visible channels (channels 01 and 02) showed that there was a large shadow being cast by the cloud plume feature, suggesting that the plume was at a high altitude; (2) the “darker appearance” on the 3.7 Âµm shortwave IR (channel 03) image was suggestive of reflection of solar radiation off the tops of a cloud that was composed of either supercooled water droplets or very small ice crystals; (3) the 10.8 Âµm and 12.0 Âµm longwave IR (channels 04 and 05) brightness temperature values were generally in the -28Âº C to -45Âº C range (darker blue to violet colors), again suggesting a high-altitude plume; and (4) at lower altitudes, small-scale wave clouds immediately downwind of Bennett Island confirmed that the topography of the island was having some effect on lee cloud formation.

The issue of cloud composition (supercooled water droplets, or ice crystals?) vs. cloud top brightness temperature is perplexing, however: supercooled water cloud droplets are known to exist at temperatures as cold as -25Âº to -35Âº C, but the spontaneous freezing of supercooled droplets (via homogeneous nucleation) is thought to occur around -36Âº to -40Âº C (smaller droplets freeze at colder temperatures). It is possible that the lower- to middle-altitude portions of the cloud plume did consist of supercooled water droplets (giving a relatively high 3.7 Âµm reflectance), but the higher-altitude portions of the cloud plume were likely made up of ice crystals. Note that the coldest NOAA-18 IR cloud-top temperatures (-47Âº C, red colors) were near the plume source, immediately downstream of the highest terrain of Bennett Island — this was due to a greater amplitude near the source of the vertically-propagating mountain wave, which was producing the highest cloud-top altitude at that particular location. 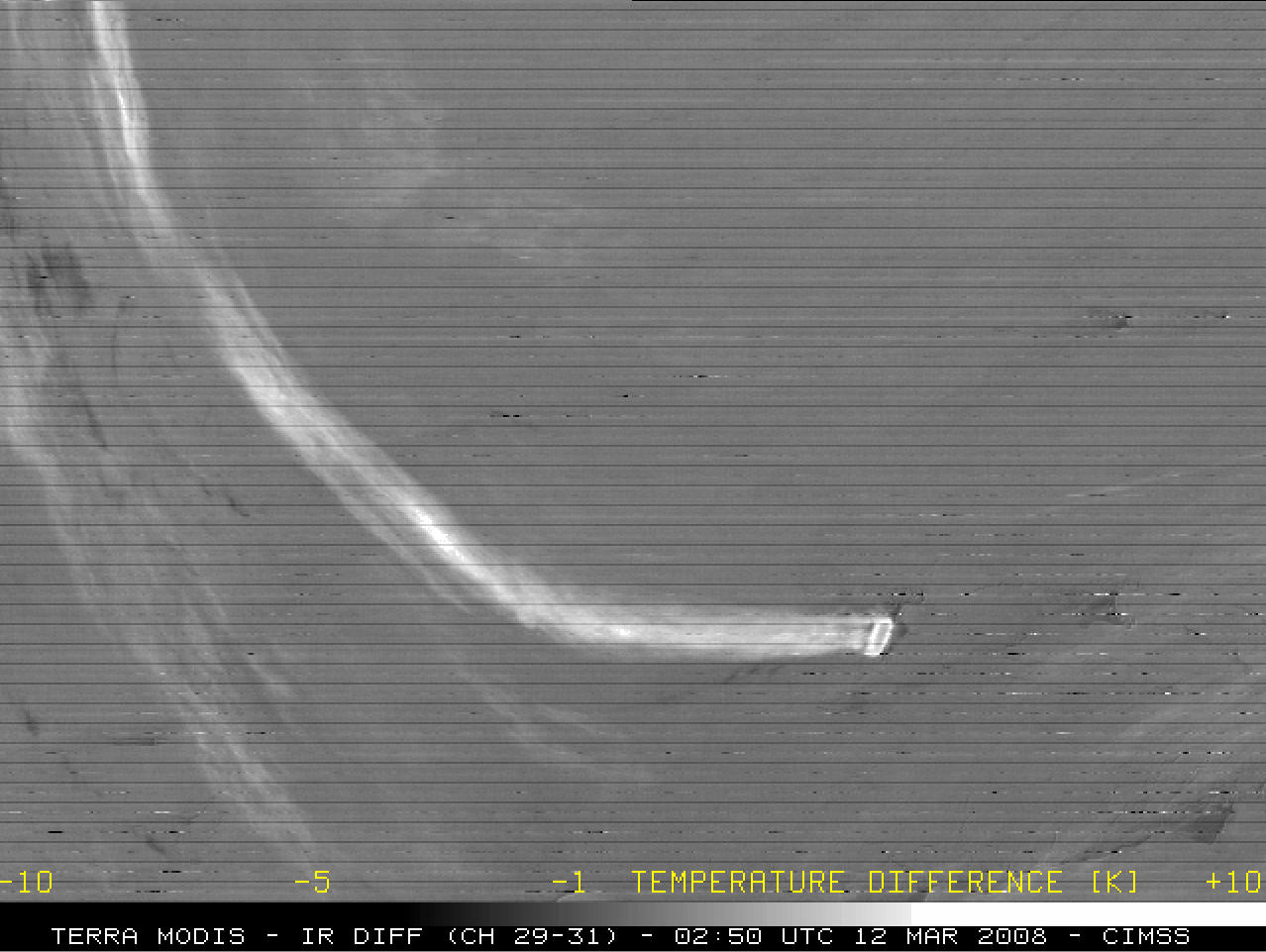 An IR difference product using Terra MODIS 8.5 Âµm – 11.0 Âµm (channel 29 – channel 31) data suggests that the upper portion of the long cloud plume was composed primarily of ice crystals — a positive IR difference value of several degrees K (brighter white enhancement) indicates the presence of ice crystals. However, another item of curiosity is the initial “rotor cloud” feature immediately downwind of the island: note the darker “donut hole” appearance on the MODIS IR difference product, which suggests that the center part of the cloud top was composed primarily of supercooled water droplets; perhaps that rotor cloud was in the process of rapidly glaciating during that time? 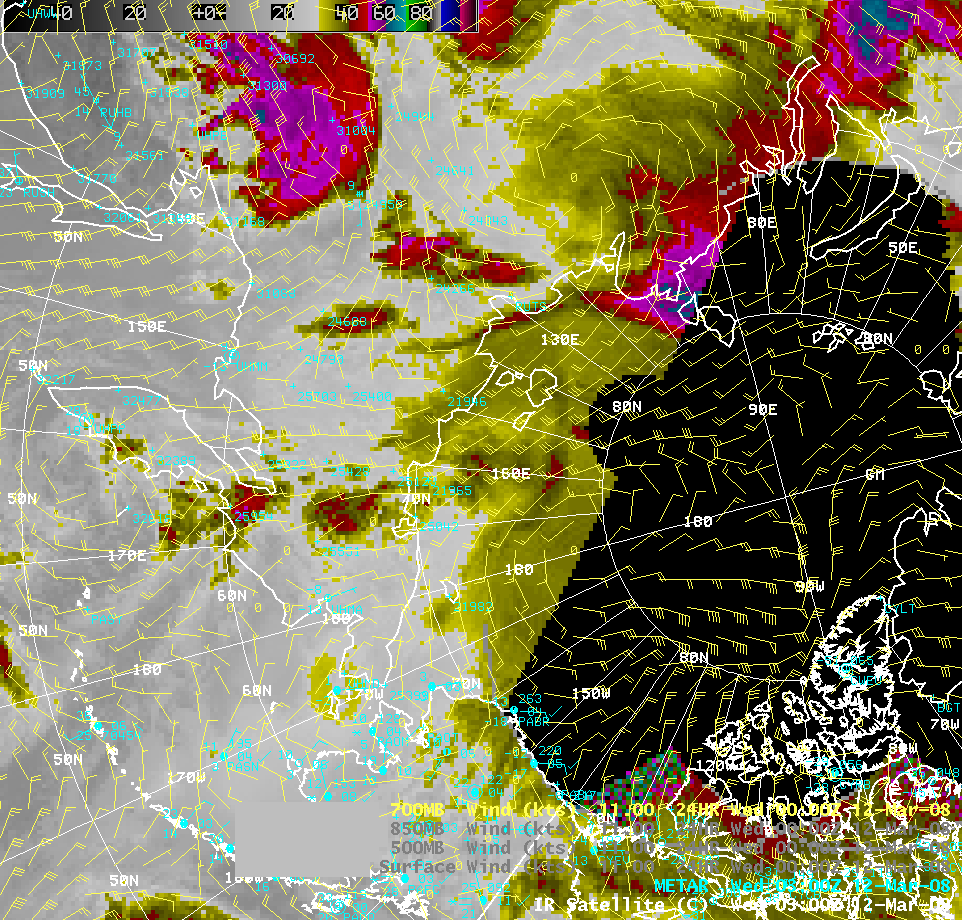 700 hPa wind fields (from a 00:00 UTC global model analysis) plotted on an AWIPS image of the 03:00 UTC global IR satellite composite (above) indicated that there was a southeasterly flow of 30-35 knots at that level over the Bennett Island region (located near the center of the image), which explains the southeast-to-northwest orientation of the cloud plume on the NOAA-18 AVHRR imagery.

Polar cloud-tracked atmospheric motion vectors (winds) derived from NOAA-15 and NOAA-17 AVHRR InfraRed data (above) also showed that a southeasterly flow aloft dominated across that region early in the day on 12 March. The Bennett Island cloud plume can be seen as a thin white streak on the final 05:42 UTC NOAA-17 image (since no wind vectors were plotted over the top of the cloud feature at that time).

The 00:00 UTC rawinsonde report from Chokurdah along the north coast of Siberia (above) indicated that there was a strong temperature inversion below the 850 hPa pressure level; air temperatures in the -28Âº C to -45Âº C range (similar to those seen in the NOAA-18 IR imagery above) were found between 700 – 450 hPa (where there was still a southeasterly flow, albeit somewhat slower in velocity).

It is still unclear why the cloud plume feature formed at a relatively high altitude, when the island itself has a maximum altitude of only 1398 ft. As stated at the conclusion of Reference #2 above: “But the Bennett Island plumes have not yielded all their mystery. Meteorologists must now explain why the plumes form at an unusually high altitude, more than 3 kilometers above the mountaintops, says Schnell.” I only wish that I were the meteorologist to do that…