Significant eruption from the Soufriere Hills volcano on Montserrat

A major eruption followed a partial dome collapse in the crater of the Soufriere Hills volcano on the West Indies island of Montserrat during the daytime hours on 11 February 2010. McIDAS images of the GOES-12 visible channel data (above) showed the rapid east-southeastward expansion of the volcanic cloud following the eruption around 17:00 UTC. Pilot reports placed the maximum height of the volcanic cloud around 50,000 feet above ground level (see the NOAA/NESDIS/SSD/OSDPD archive of Volcanic Ash Advisories and satellite images).

GOES-12 3.9 Âµm shortwave IR images (below) showed a thermal anomaly or “hot spot” during the hours leading up to the major eruption, with a maximum IR pixel value of 322 K or 49Âº C (yellow color enhancement) at 16:45 UTC. Also note the darker appearance of the western and southern portions of the volcanic cloud: these were areas of the cloud that were composed primarily of supercooled water droplet clouds, which strongly reflect solar radiation (which then leads to much warmer shortwave IR brightness temperature values).

AWIPS images of high-altitude GOES-12 derived atmospheric motion vectors in the vicinity of the volcanic plume (below) were generally in the 40-55 knot range — the 12 UTC rawinsonde data from station TFFR (Le Raiset, Guadaloupe) had maximum west-northwesterly winds of 68 knots at 280 hPa (around the 41,000 foot level).

A comparison of 4-km resolution GOES-12 3.9 Âµm and 1-km resolution NOAA-15 AVHRR 3.7 Âµm shortwave IR images (below) showed the advantage of higher spatial resolution for detecting the magnitude of the volcano’s hot spot — the hottest pixel seen on the NOAA-15 image was 330 K or +57Âº C (red color enhancement), compared to only 293.5 K or +20Âº C (black color enhancement) on the GOES-12 image.

A natural color Red/Green/Blue (RGB) composite image using Aqua MODIS channels 01/04/03 (below) showed the volcanic cloud at 17:20 UTC, about 20 minutes after the explosive eruption. The tall volcanic cloud was casting a long shadow toward the north-northeast at that time. In addition, the hazy signal of previous volcanic emissions from earlier in the day could be seen covering a much larger portion of the region. 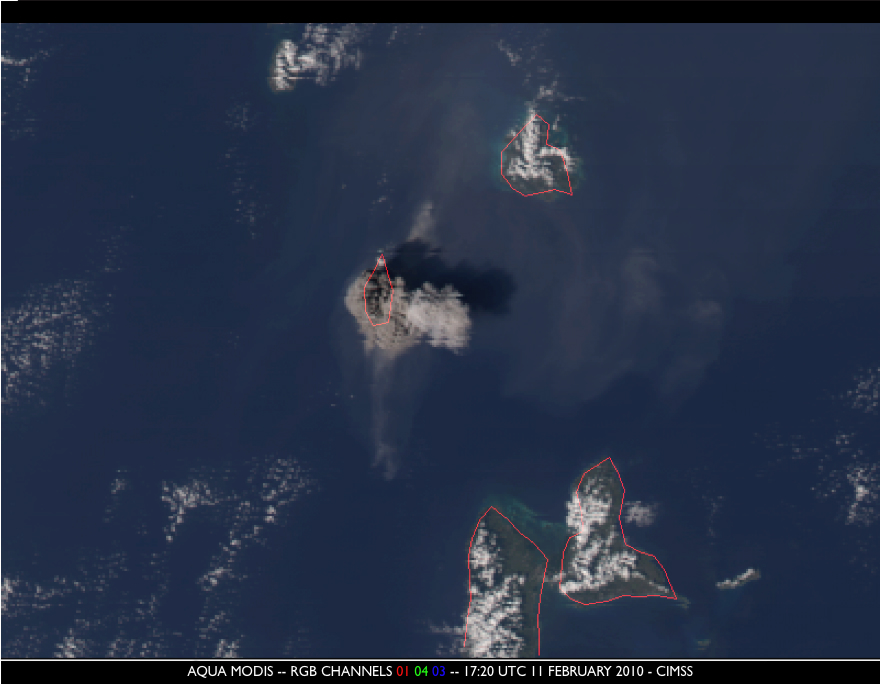 A few hours later, a false-color Red/Green/Blue (RGB) composite image using NOAA-15 AVHRR channels 01/02/04 (below) shows a view of the volcanic cloud at 21:02 UTC. Again, the tall cloud feature was still seen to be casting a long shadow toward the north-northeast at that time. The thermal anomaly from the volcano hot spot appeared as the small yellow area on the RGB image. 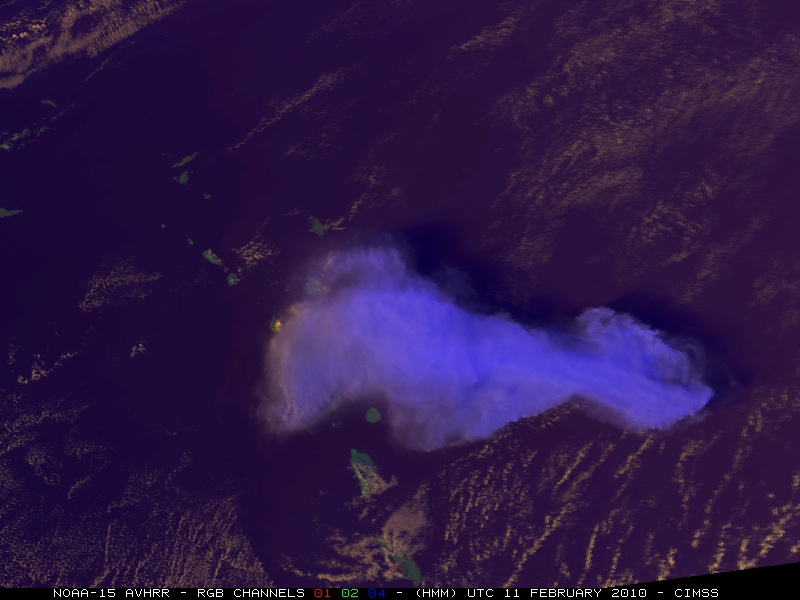 A sequence of three sets of of images from the GOES-12 sounder (below) shows the sounder longwave IR window image (top panels) along with a sounder IR difference product (7.4 Âµm – 13.3 Âµm, bottom panels) before, during, and after the eruption. The darker gray to black image features intermingled with the brighter white water vapor and volcanic ash clouds are signals of a high concentration of SO2. The GOES Sounder is able to detect SO2 from a volcanic eruption, as long as it is not masked by both the water vapor and volcanic ash during and immediately following the eruption. This particular case was a situation where the extensive water vapor and volcanic ash clouds did in fact mask the SO2 signal resulting from the eruption of Soufriere Hills volcano. (GOES-12 sounder images provided by Tony Schreiner, CIMSS)

GOES-12 6.5 Âµm water vapor imagery with an overlay of Canadian Meteorological Center 400 hPa winds (below) revealed that an anticyclone was building aloft over the region following the eruption of the Soufriere Hills volcano — this would provide an environment of increasing mid-tropospheric subsidence that could explain the rapid decrease in retrieved volcanic ash heights. Subsequently, the water vapor image brightness temperature values were also increasing in the area of the building ridge, as seen by the warming trend of brightness temperatures averaging around -20Âº C (yellow color enhancement) to values averaging around -15Âº C (orange color enhancement).