* GOES-16 data posted on this page are preliminary, non-operational and are undergoing testing *

As seen on the map of SPC storm reports from 21 June 2017 (above), nighttime thunderstorms (during the pre-dawn hours of 22 June) produced a swath of hail (as large as 2.0 inches in diameter) that damaged emerging crops at some locations across eastern South Dakota and southwestern Minnesota (NWS Aberdeen summary).

Nearly 2 weeks later, on 04 July, the hail damage swath was still apparent on GOES-16 imagery. In a comparison of “Blue” Visible (0.47 µm), “Red” Visible (0.64 µm) and Near-Infrared “Vegetation” (0.86 µm ) images (below), the northwest-to-southeast oriented hail damage swath was best seen on the 0.64 µm imagery (in part due to its higher spatial resolution, which is 0.5 km at satellite sub-point); healthy vegetation is more reflective at 0.86 µm, so the crop-damaged hail swath appears slightly darker in those images.

A signature of the hail damage swath was also seen in Near-Infrared “Snow/Ice” (1.61 µm) and Shortwave Infrared (3.9 µm) images (below). The hail damage swath warmed more quickly on the 3.9 µm imagery — exhibiting a darker black appearance with time — compared to the adjacent fields of healthy crops.

Why was the hail damage swath also seen on the 1.61 µm “Snow/Ice” (Band 5) imagery? A look at the Spectral Response Functions for GOES-16 ABI  bands 3, 4, 5 and 6 — plotted with the reflectance of asphalt, dirt, grass and snow (below) — show that the 1.61 µm Band 5 happens to cover a portion of the radiation spectrum where there is a minor peak in grass relectance (denoted by the green plot).

Spectral Response Functions for GOES-16 ABI Bands 3, 4, 5 and 6, along with the reflectance of asphalt, dirt, grass and snow [click to enlarge]

Regarding the warmer temperatures seen on GOES-16 Shortwave Infrared images, the 1-km resolution Aqua MODIS Land Surface Temperature product at 1738 UTC (above) revealed a 10º F difference between the warmer hail damage swath (which appeared to be about 100 miles in length) and adjacent fields of undamaged crops. A similar result was noted on 03 July by NWS Aberdeen (below).

A comparison of before (21 June) and after (02 July) Aqua MODIS true-color Red/Green/Blue (RGB) images from the SSEC MODIS Direct Broadcast site (below) clearly shows the hail damage path.

Aqua MODIS true-color RGB images, before (21 June) and after (02 July) the hail event [click to enlarge]

On 05 July a closer view of the hail scar was seen using a Suomi NPP VIIRS true-color RGB image from RealEarth (below).

Meant to share this a while ago. Sentinel 2A passed over the area 7/2/17. Zoomed to Castlewood. Hires: https://t.co/9edCkrqXob #sdwx #mnwx pic.twitter.com/vqkSs4og6f 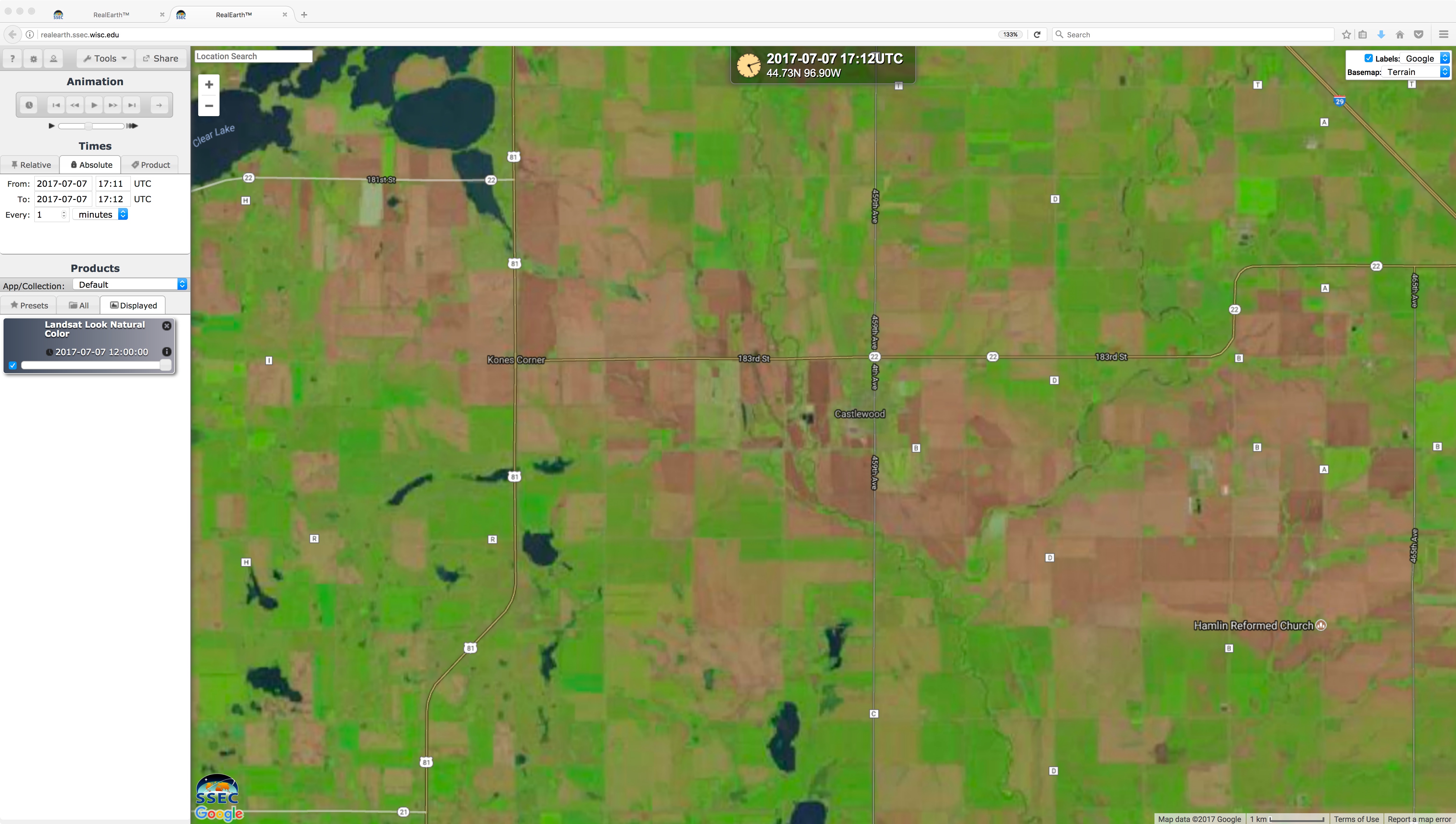 Other examples of satellite-observed hail damage swaths can be seen here and here.