Widespread blowing dust across the south-central US

McIDAS images of GOES-13 0.63 Âµm visible channel data (above; click image to play animation) showed two very large blowing dust features during the afternoon hours on 18 March 2014: one moving southward out of southeastern Colorado, and another moving eastward out of New Mexico across Texas and Oklahoma. Winds gusted to 75 mph in southeastern Colorado, and 60 mph in the Texas Panhandle; surface visibilities were reduced to near zero at times at some locations. As a result, some highways were closed in southeastern Colorado. Another significant blowing dust event had impacted much of this same region one week earlier. 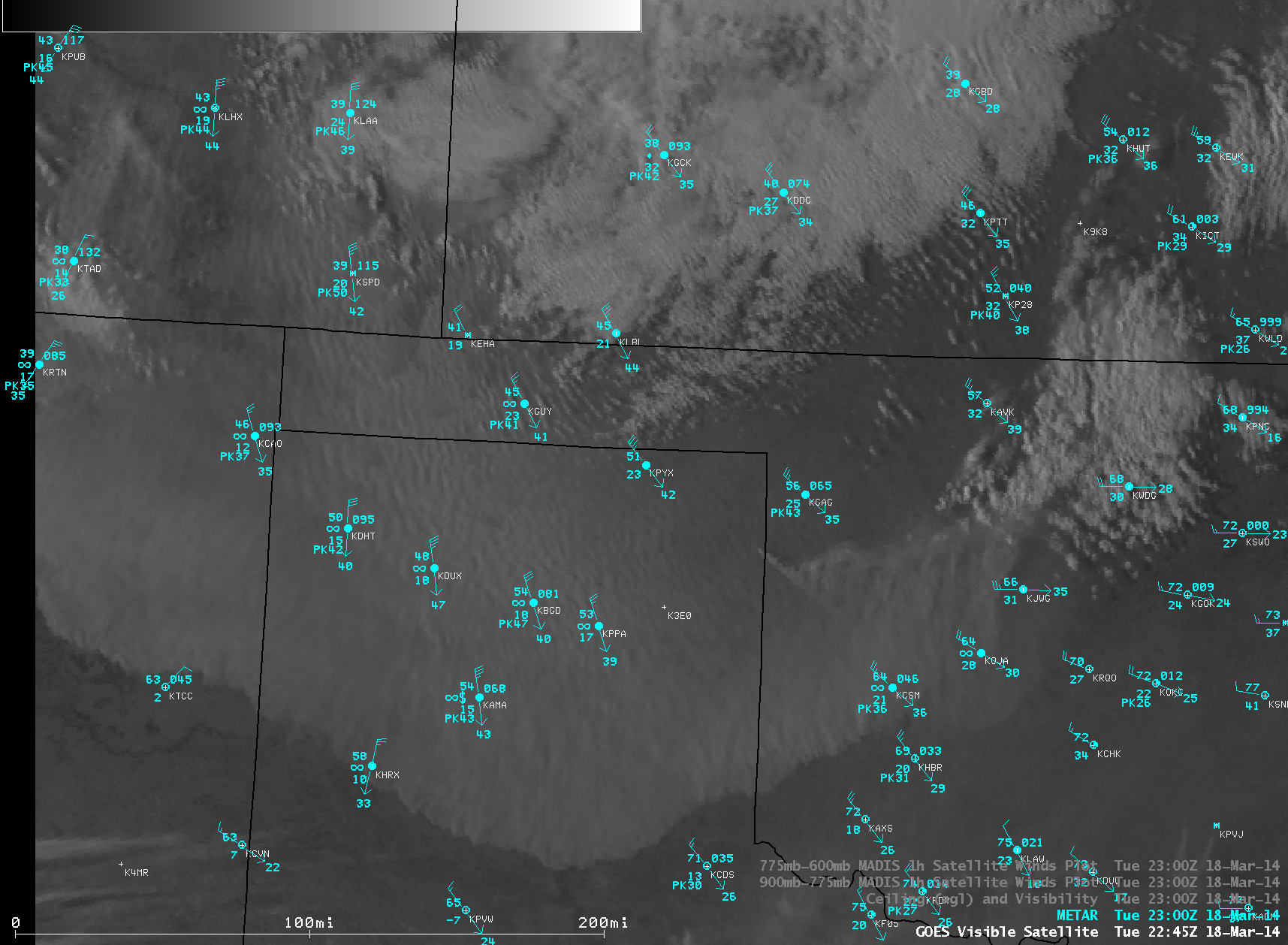 Taking a closer look at the large southward-moving dust plume with AWIPS images of GOES-13 0.63 Âµm visible channel data (above; click image to play animation) and GOES-13 3.9 Âµm shortwave IR channel data (below; click image to play animation), it can be seen that a large wildfire began to burn around 19:15 UTC (2:15 PM local time) near the Texas/Oklahoma border as the strong winds associated with the leading edge of the dust storm moved through. The hot fire (yellow to red to black pixels on the shortwave IR images) produced pyrocumulus clouds and a smoke plume that rose above the top of the dust layer, high enough to cast a shadow due to the low sun angle at the end of the day. Note from the distance scale on the lower left portion of the visible images that this “wall of dust” was at least 300 miles wide. 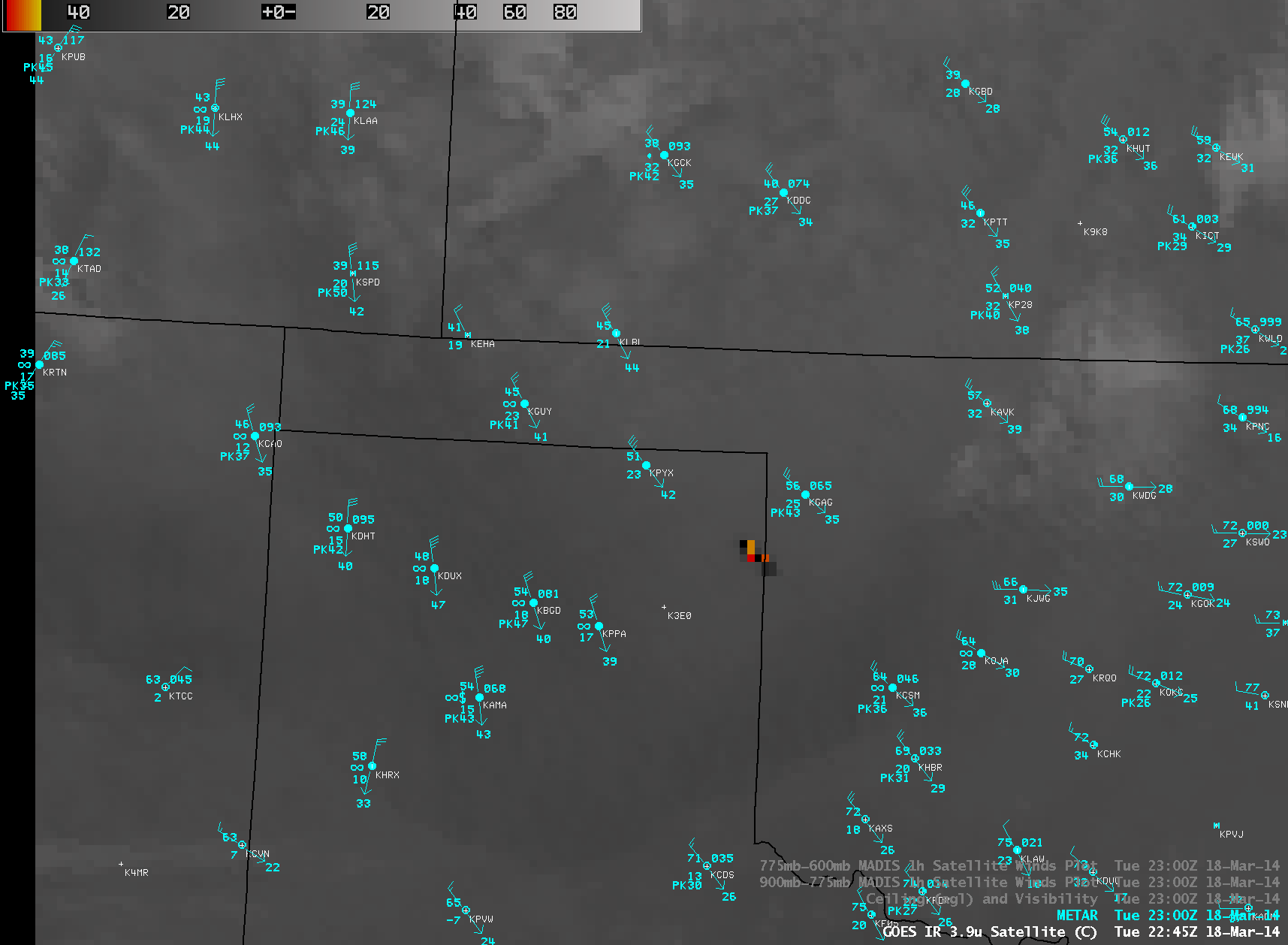 The CLAVR-x POES AVHRR Cloud Top Height product (below) indicated that the top of the southward-moving dust layer was generally 1-2 km above ground level (cyan to light green color enhancement).

Terra and Aqua MODIS true-color Red/Green/Blue (RGB) images visualized using the SSEC RealEarth web map server (below) revealed that the composition of the dust from the 2 source regions took on a different appearance, indicating that the nature and composition of the aerosols were different.

AWIPS images of the Terra and Aqua MODIS “reverse absorption” 11-12 Âµm IR brightness temperature difference product (below) offered another method of identifying the areas where the airborne dust was the most dense.

Additional satellite images from this event can be found on the Wide World of SPoRT and RAMMB: GOES-R Proving Ground Blog sites. 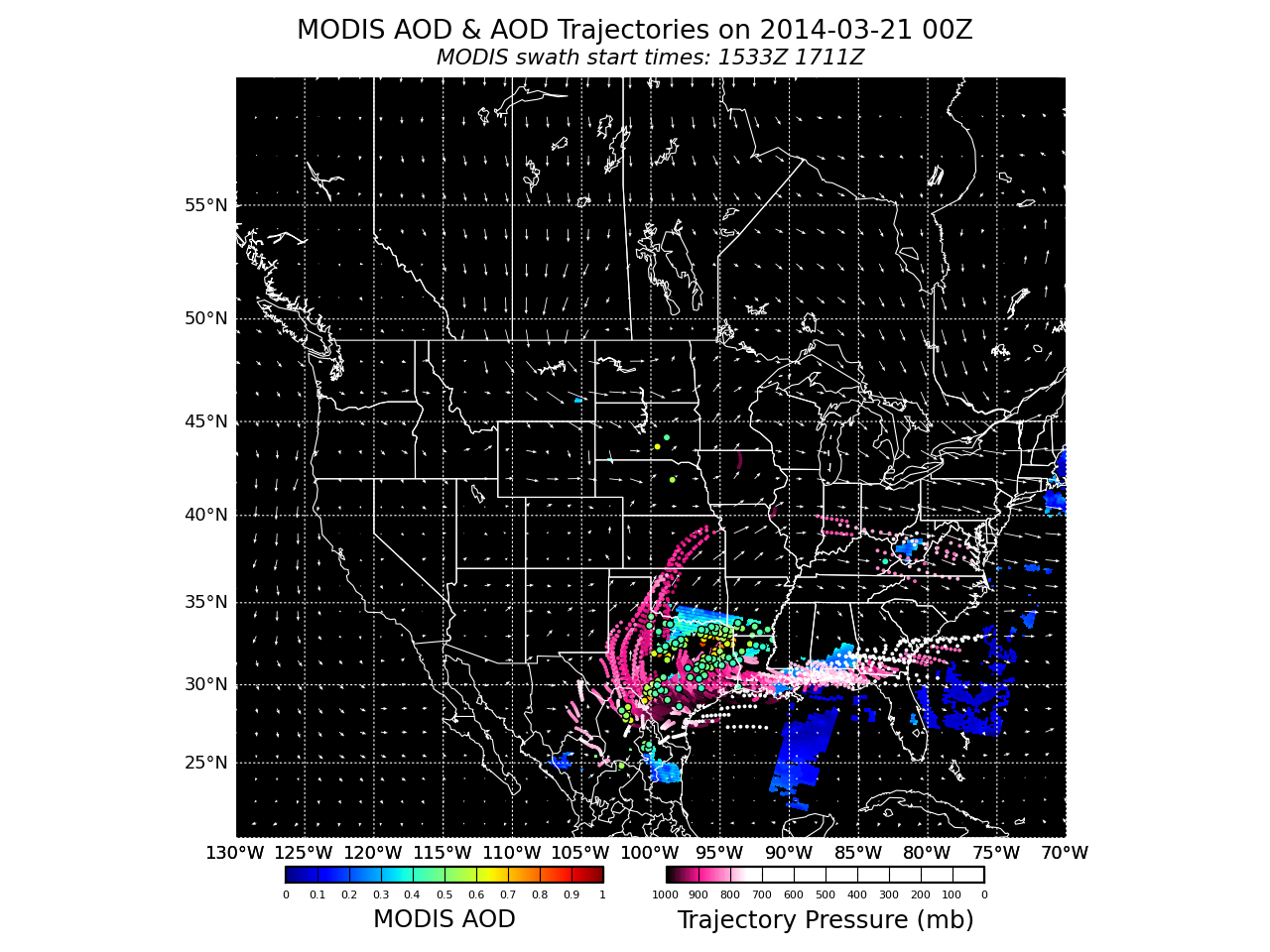 The IDEA-I MODIS Aerosol Optical Depth product indicated that much of the airborne dust remained over southern and eastern Texas on 19 March. Forecast forward trajectories (above; click image to play animation) suggested that some of this dust would get recirculated back northward across western Texas, and eventually move over Kansas in 24-48 hours.