Smoke over the Foothills of Colorado

A comparison of GOES-11 and GOES-13 visible images (above) showed that some smoke aloft (from wildfires that had been burning in parts of the northern Rocky Mountains) was drifting over the Foothills region of eastern Colorado during the morning hours on 28 August 2008. Northwesterly winds aloft wereÂ  blowing a good deal of the smoke toward the southeast, but some smoke at lower levels could be seen moving southwestward and backing up against the higher terrain (a result ofÂ  upslope winds in the wake of a cold frontal passageÂ  on the previous day). Both the Denver, Colorado rawinsonde report and the Platteville, Colorado NOAA wind profiler data indicated the northeasterly upslope flow was restricted to the lowest 1 km or so of the atmosphere.

A similar comparison of GOES-12 and GOES-13 images during the afternoon hours (below) showed thatÂ  the low-level smoke was still backed up against the Foothills, but was also beginning to slowly drift toward the north as the boundary layer winds began to acquire more of a southerly component. Note that the surface features on the GOES-13 animations exhibit less image-to-image movement compared to both GOES-11 and GOES-12 — improvements to the GOES-13 spacecraft Image Navigation and Registration (INR) systemÂ  include the use of star trackers to provide more precise image navigation.

The smoke was easier to identify using 250-m resolution MODIS true color imagery from the SSEC MODIS Today site (below), and this smoke was also evident on the MODIS Aerosol Optical Depth product. 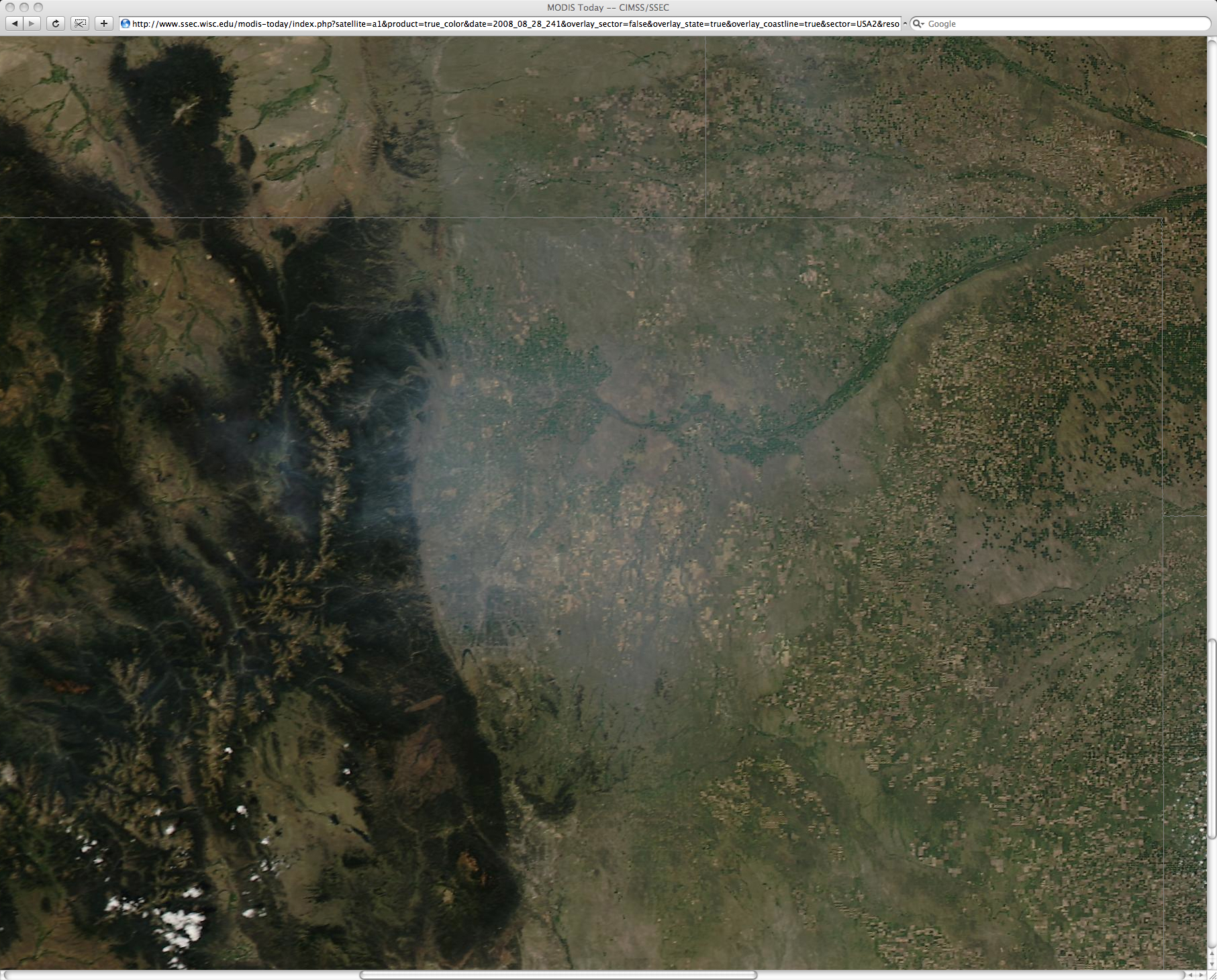 .AVIATION…VFR CONDITIONS TO CONTINUE THROUGH TONIGHT. SMOKE OVER AREA HAS BEEN CREATING SOME SLANT VISIBILITY PROBLEMS UPON APPROACH AS WELL AS TAKE OFFS…BUT NO CONCERNS WITH SURFACE VISIBILITY. IT DOESN`T APPEAR THAT SURFACE VISIBILITY WILL BE REDUCED.

While there were a couple of pilot reports of haze aloft over the region around 18:00 UTC, at altitudes of 11,500Â  and 14,000 feet (below), the surface visibilities only dropped to 6 miles at Boulder (KBJC) and 7 miles at Denver (KDEN)Â  during the afternoon hours, and remained around 10 miles at other surrounding airports.