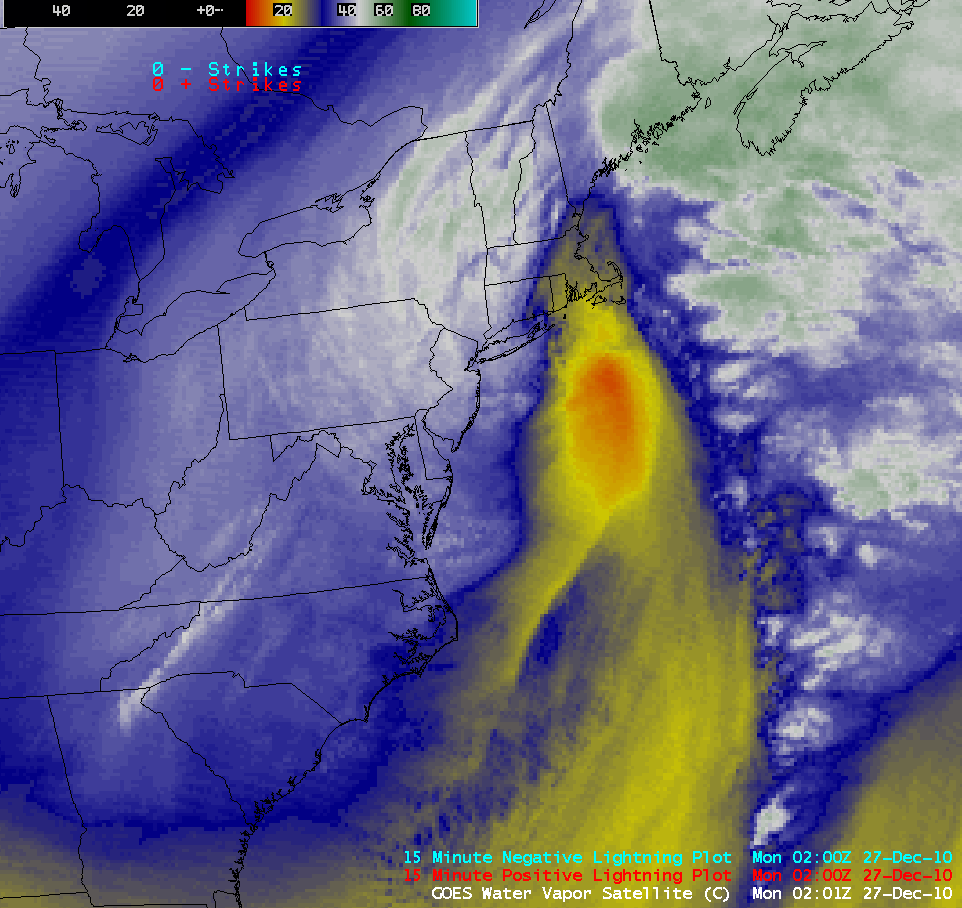 An intense winter storm impacted a great deal of the eastern US on 26 December – 27 December 2010, producing blizzard conditions along much of the East Coast (with Blizzard Warnings issued from Virginia to Maine), total snowfall amounts as high as 32.0 inches at Rahway, New Jersey, and significant accumulations as far south as Mississippi, Alabama, and Georgia (HPC storm summary). AWIPS images of 4-km resolution GOES-13 6.5 Âµm water vapor channel data (above) showed that the storm exhibited a very well-defined dry slot (yellow to orange color enhancement) and comma head structure during the course of its development. Cloud-to-ground lightning strikes could be seen along the periphery of the dry slot, with isolated strikes noted over New Jersey and also Long Island, New York (where thundersnow was reported). An excellent summary of the storm can be found on the AccuWeather WeatherMatrix Blog.

On a series of 1-km resolution POES AVHRR 0.63 Âµm and MODIS 0.65 Âµm visible images (below) the shadowing and texture of a number of convective bands could be seen, which were responsible for enhancing snowfall rates. On a longer series of 1-km resolution POES AVHRR and MODIS IR images, IR cloud top brightness temperatures as cold as -40 to -50Âº C were evident along the East Coast of the US.

Night-time images of 4-km resolution GOES-13 3.9 Âµm shortwave IR images suggested the presence of a warm “eye-like” signature at the center of the storm, but the subsequent daytime 1-km resolution GOES-13 0.63 Âµm visible images showed that the presence of extensive low-level cloudiness prevented a well-defined “eye structure” from being seen (below).

Once the bulk of the cloudiness had cleared in the wake of the storm by the afternoon on 27 December, a comparison of a 1-km resolution MODIS 0.65 Âµm visible channel image with the corresponding MODIS false-color Red/Green/Blue (RGB) image (created using the 0.65 Âµm visible channel as the Red and the 2.1 Âµm “snow/ice” channel as the Blue and Green components of the image) revealed that a rather large “snow hole” remained from central Pennsylvania to northern Virginia (below). Inland snow cover appeared as darker shades of red on the RGB image, in contrast to bare ground (cyan) and supercooled water droplet clouds (lighter shades of white).