We received the following in an email from Mike Sporer (NOAA/NESDIS):

I saw this in a Goes-13 visible loop. There appears to be a "dark cloud" originating near the volcano Popocatepetl. But I have never seen a volcanic plume appear dark in a visible image before. The "dark cloud" also appears in IR4 at a temperature similar to nearby mid clouds but IR2 shows no hot spot signature of volcanic activity. Could it be that Popocatepetl burped a huge cloud of gas that is absorbing in the visible spectrum?

Taking a closer look using McIDAS images of GOES-13 0.63 Âµm visible channel data (above), a large dark plume feature can be seen moving southward and then southwestward, just to the east and south of the summit of the Popocatepetl volcano (denoted by the red “V” on the images) on 19 December 2010. It is interesting to note that part of the northern (trailing) edge of the dark plume appeared to slow down and then separate from the main body of the plume around 17 UTC — the turning of the surface winds from northerly to southerly at Puebla (the observing station just to the east) may have had something to do with this plume behavior. 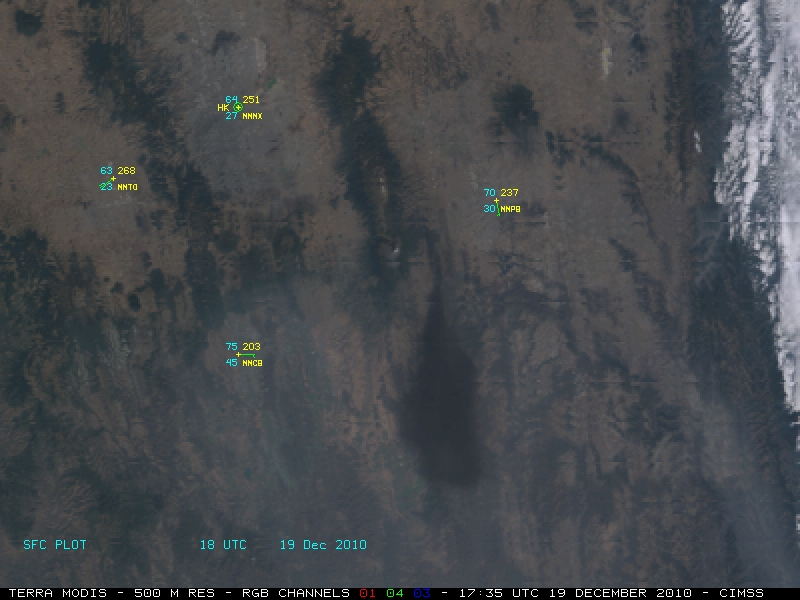 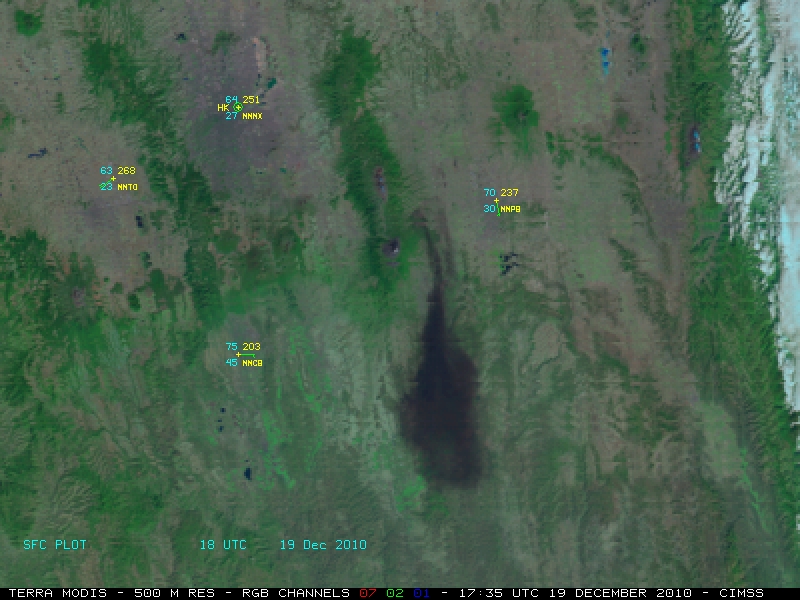 The plume feature also appeared very dark on MODIS Red/Green/Blue (RGB) images at 17:35 UTC (above) — and on AWIPS images of POES AVHRR data at 19:45 UTC (below) the plume exhibited IR brightness temperatures around 12-15Âº C, which corresponded to altitudes between 9307-10,656 feet or 2838-3249 meters on the Mexico City MMMX rawinsonde plot).

As it turns out, this plume was not volcanic in nature, but rather was a result of a large fire from an explosion on the Nueva Teapa oil pipeline near San Marten Texmelucan in the state of Puebla (news article 1 | news article 2). Several hours earlier, a pronounced “hot spot” (yellow to red color enhancement) could be seen on a 1-km resolution MODIS 3.7 Âµm shortwave IR image at 08:10 UTC (below). The maximum IR brightness temperatureÂ  within the hot spot feature at that time was 322 K (49Âº C).

Thanks to Mike for the heads-up on this very interesting satellite feature!