Severe convection developed ahead of a frontal boundary that was moving southward across the Rio Grande Valley late in the day on 24 April 2007. GOES-12 was in Rapid Scan Operations, providing images at 5-minute intervals during much of the event; 10.7 µm Infrared (IR) images (above; Java animation) showed that these supercells began to exhibit an “enhanced-v” signature about 30 minutes prior to the initial SPC storm reports (although the storm could very well have been producing severe weather before the time of the SPC reports, while it was still over Mexico). This storm produced large hail (up to 2.75 inches in diameter), strong winds (up to 76 mph), and the EF-3 tornado that killed 10 and injured 120 persons in the Eagle Pass, Texas / Piedras Negras, Mexico area.

A view of the storm with the 1-km resolution IR image from the polar orbiting NOAA-16 satellite revealed a “warm trench” signature surrounding the most intense overshooting top (above). You can get a sense that such a trench feature can surround an overshooting top by examining astronaut photography of thunderstorms taken from the space shuttle (image courtesy of Earth Sciences and Image Analysis Laboratory, NASA Johnson Space Center). The anvil top temperatures were as cold as -67º C on the GOES-12 IR image, which corresponded to the tropopause temperature near the 141 mb pressure level (at an altitude of 14.3 km / 47,000 ft) on the Del Rio, Texas rawinsonde report — however, the overshooting top temperatures were significantly colder (-78º C) on the NOAA-16 IR image. In addition, a false-color RGB composite using NOAA-16 AVHRR visible channels 1 and 2 along with IR channel 4 (below) showed a well-defined above-anvil cirrus plume streaming northeastward from the primary overshooting top region; this anvil plume was also a persistent feature on GOES-12 visible images (animated GIF | MP4). 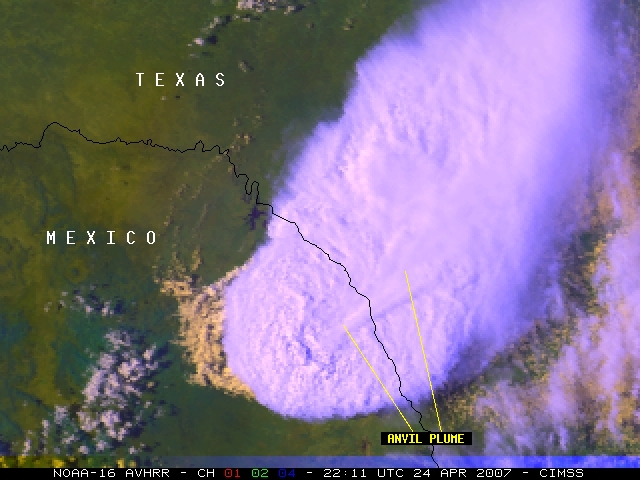