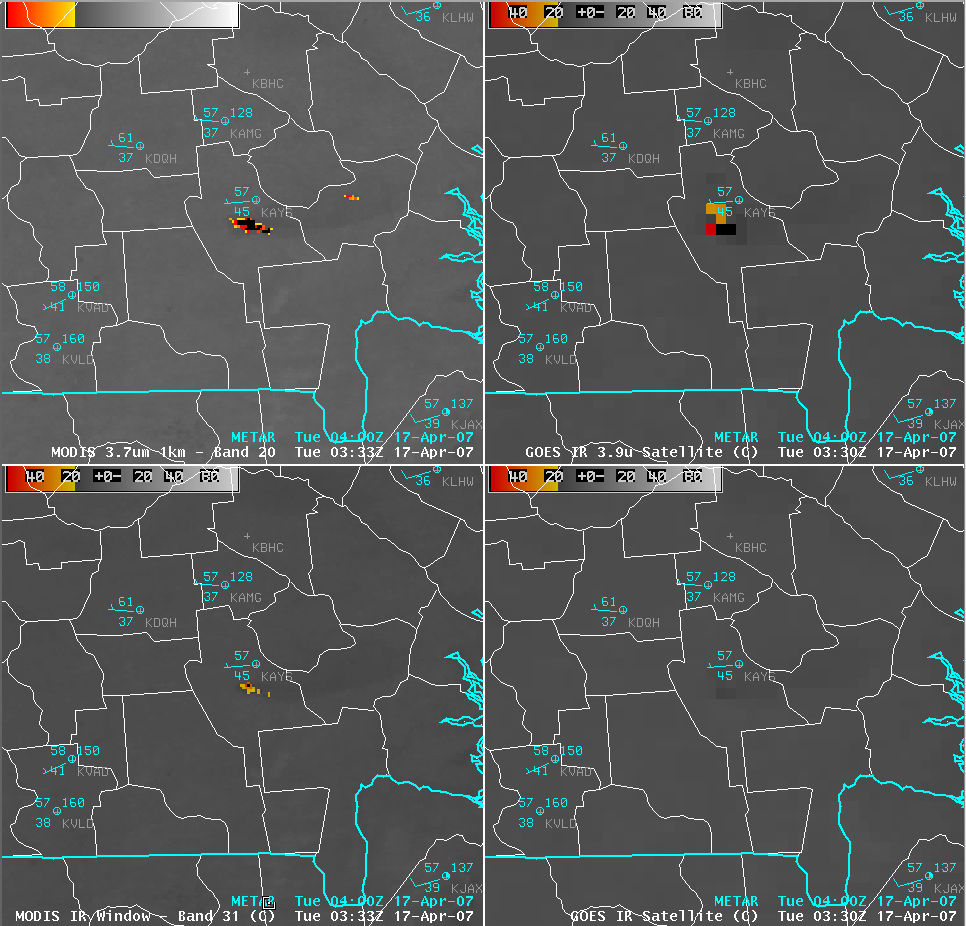 What would eventually become the largest wildfire in Georgia history (the 472,000 acre Sweat Farm Road / Big Turnaround fire) began to burn in southeastern Georgia (in central Ware county, just south of Waycross, station identifier KAYS) during the afternoon hours on 16 April 2007. Much of that region had been experiencing moderate drought conditions, and high winds that day (gusting to 38 mph at Waycross) helped the fire to grow quickly, forcing some local residents to evacuate their homes. AWIPS images of the MODIS and GOES shortwave IR (3.7/3.9 Âµm) and IR window (10.7/11.0 Âµm) channels (above) revealed a significant “hot spot” associated with this fire complex at 03 UTC on 17 April (11 PM on 16 April, local time). Compared to the 4-km resolution GOES image, the 1-km resolution MODIS image offered a more accurate depiction of the shape of the active fire (reported to be 1 mile in width, and 12 miles in length), and also showed another smaller fire that was burning to the east of KAYS at that time. Note that portions of the larger fire were hot enough to saturate the shortwave IR detectors on both MODIS and GOES, yielding black pixels (“NO DATA” pixels) on the AWIPS imagery. McIDAS imagery of the fire hot spots depicted maximum brightness temperatures of 329.0 K (132.5 F) on GOES-12, 330.0 K (134.3 F) on MODIS channels 20/22, and 354.9 K (179.15 F) on MODIS channel 23. In addition, the fire was even hot enough to exhibit “warm pixels” on the IR window channel images (42Âº C on MODIS, 15Âº C on GOES). The automated CIMSS Wildfire ABBA product indicated saturated fire pixels over that area as early as 20:15 UTC on 16 April (4:15 PM local time).

It was not possible to locate the hottest fire pixel within the cluster of black “NO DATA” pixels on the AWIPS MODIS Band 20 (3.7 Âµm) IR images; however, one could use the MODIS Band 7 (2.1 Âµm) image (below) to pinpoint where the hottest portion of the fire was at that particular time (denoted by the small cluster of “bright” pixels in the upper right panel, near the center of Ware county in Georgia). Although the Band 7 imagery is primarily used for snow/ice detection, this near-IR channel (available during daytime only) will exhibit a signal where the hottest pixels are located — this is due to the fact that higher temperatures shift the peak of the Planck function to shorter wavelengths. 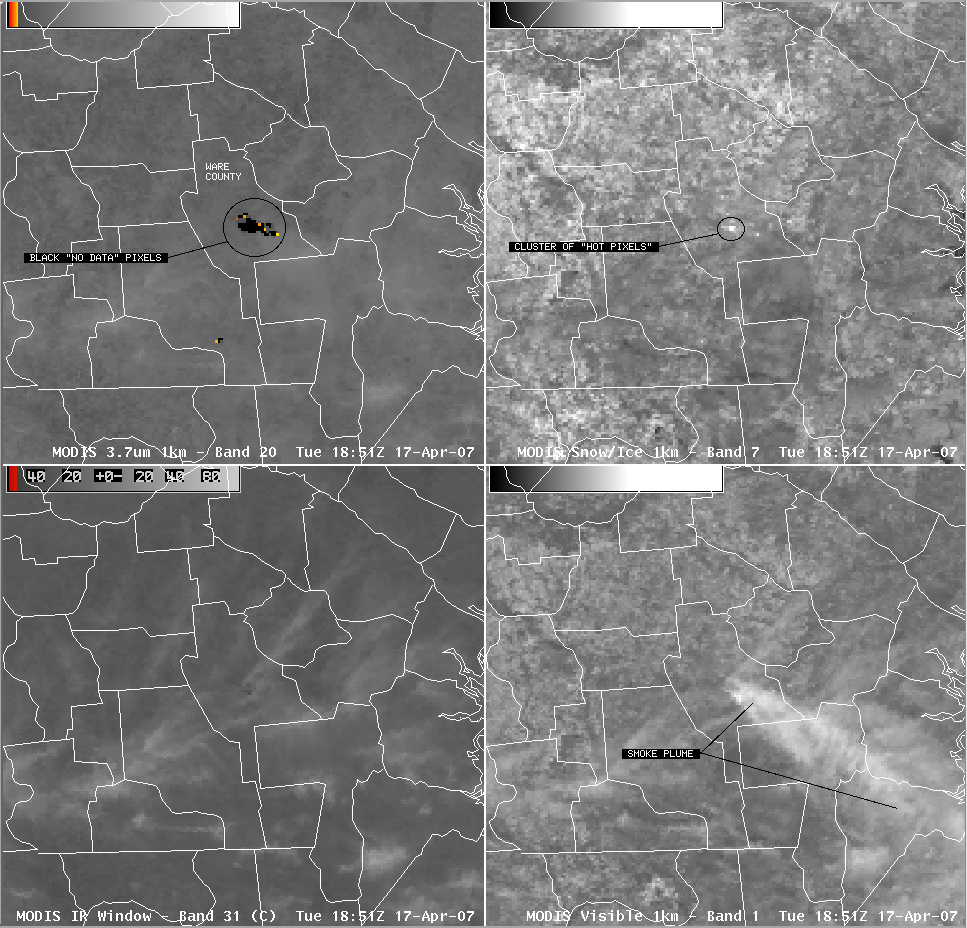 GOES-12 visible and 3.9 Âµm shortwave IR imagery (above; Java animation) showed a thick smoke plume drifting southeastward during the day on 17 April; the smoke reduced surface visibilities (as low as 1/2 mile at Jacksonville, Florida) and slowed traffic on area roadways. On McIDAS, the saturated fire pixels “wrapped around” and were displayed as very cold pixels (white enhancement) on the 3.9 Âµm IR imagery. The land surface beneath the thick smoke plume exhibited a slightly cooler 3.9 Âµm brightness temperature (lighter gray enhancement), due to a reduction in solar radiation arriving at the surface.MODIS true color imagery (below) indicated that the smoke from this fire had drifted as far as the northern Bahama Islands.