Wildfires in the Yukon Territory of Canada 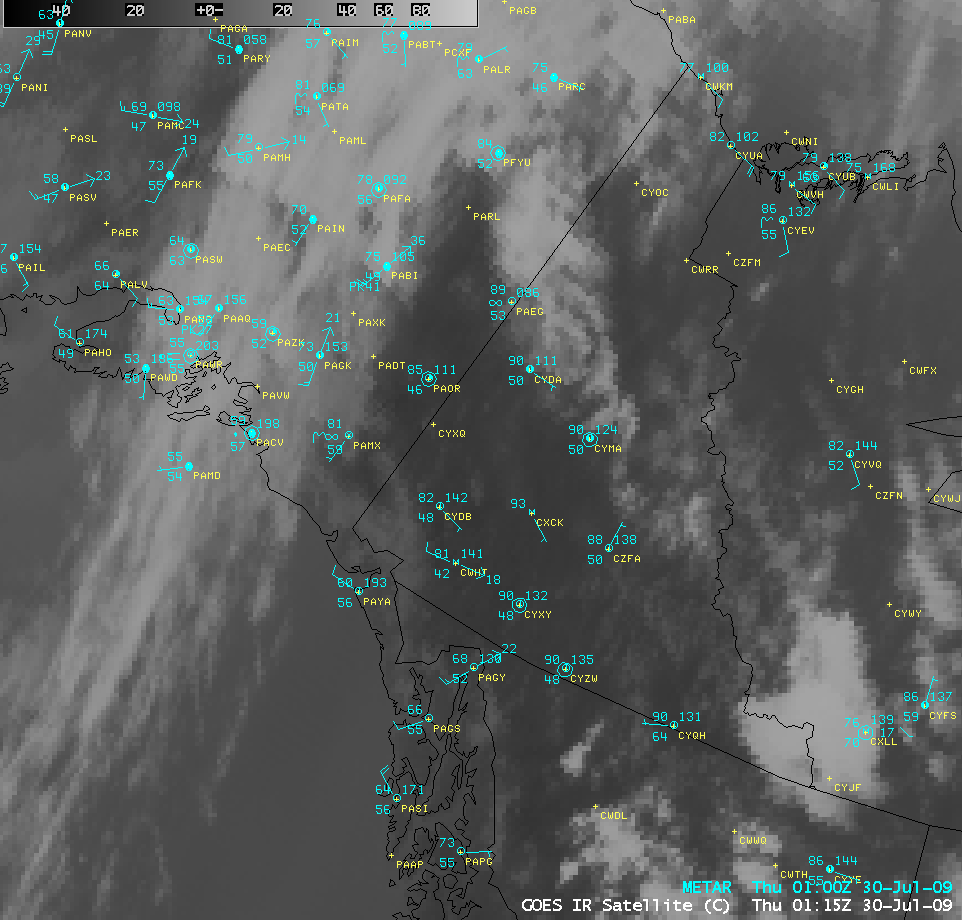 The anomalously strong ridge of high pressure that helped to bring record warm temperatures to parts of the Pacific Northwest — which included an all-time high temperature of 103Âº F at Seattle WA — was also bringing unseasonably warm temperatures as far north as the Yukon Territory of Canada on 29 July – 30 July 2009. A GOES-11 IR image with surface reports (above) showed that surface temperatures were as warm as 93Âº F (34Âº C) at Carmacks (station identifier CXCK) and as warm as 82Âº F (28Âº C) at Shingle Point (station identifier CYUA) along the arctic coast.

These warm temperatures were helping to create an environment favorable for rapid wildfire growth. GOES-11 visible images (above) revealed a number of very large smoke plumes that developed across the Yukon Territory.

A 1-km resolution NOAA-15 AVHRR Red/Green/Blue (RGB) composite image (below) offered a closer view of some of the fires and their associated smoke plumes. Note the difference in appearance between the rivers in far western Yukon Territory (along the far left side of the image) and the dark blue lakes located farther to the east. The westernmost rivers are fed by the melting glaciers (seen in the lower left corner of the image) and contain a great deal of suspended sediment, which makes their water surface appear very different than that of the lakes.

With the aid of a favorable forward scattering angle during the early morning hours, a large plume of smoke aloft from the Yukon fires (with possible contributions from recent Alaska fires as well) could be seen on GOES-11 visible images (below), moving southeastward across parts of the Dakotas, Minnesota, Nebraska, and Iowa on 01 August 2009.

Later in the morning, the smoke plume was very evident on MODIS true color imagery (below) as it continued to move eastward over Wisconsin and Lake Michigan.