An interesting large “dark feature” showed up on AWIPS images of the MODIS visible channel (above) over Lake Michigan on 04 June 2009. This dark feature appeared to be shifting slowly southward during the 105-minute period between the time of the Terra MODIS image (16:53 UTC, or 11:38 am local time) and the time of the Aqua MODIS image (18:38 UTC, or 1:38 pm local time).

It is revealing to examine the corresponding MODIS Sea Surface Temperature (SST) images (below), which indicate the presence of a significantly warmer area of SST values located within the region of the “dark feature” that was seen on the visible imagery. MODIS SST values were as warm as 52.4º F on the Terra image, and 57.3º F on the Aqua image (darker green colors) — a good 10-15º F higher than the surrounding cooler waters (39-42º F, darker blue colors). There are only 2 buoys in Lake Michigan — Buoy 45007 in the northern portion of the lake (reporting a water temperature of 39º F), and Buoy 45002 in the southern portion of the lake (reporting water temperatures of 41-43º F) — so the MODIS SST data provided potentially useful information in an otherwise data-void area.

As it turns out, this large dark feature on the visible imagery corresponded to the portions of the lake water that were very smooth. Since high pressure was centered over this region — note that the NAM12 model surface winds (below) were only in the 0-5 knot range  — the wind-driven wave heights were minimal, allowing for a nearly flat water surface. The presence of very light winds also allowed the “skin temperature” of the water surface to warm very quickly, as we have seen over Lake Michigan in the past. The warmest SST values were located near the center of the “light winds region”, where the winds apparently had been calm for several hours (or longer). 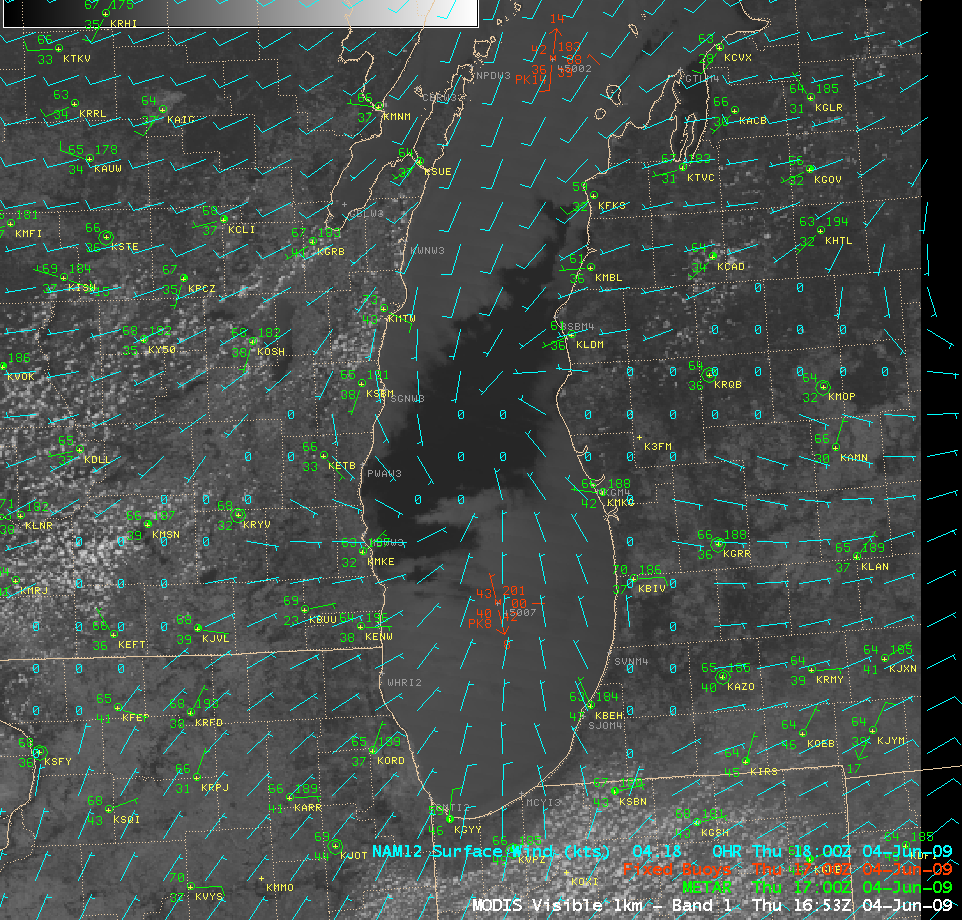 So, why did this large area of “smooth water” appear darker on the MODIS visible imagery? The answer lies in the fact that with imagery from polar-orbiting satellites such as Terra and Aqua, there is often a significant amount of sun glint off the rough water surfaces below the satellite overpass — these areas of sun glint make the rougher water surfaces appear brighter on visible imagery. However, in the area of the calm winds, the water surface was very flat…and this flat water surface then reflected like a mirror (with all the light being reflected back in one direction — but in this case, that one direction was not directly back toward the satellite!).

This idea is supported by the MODIS 3.7 µm shortwave IR imagery (below) — this particular channel is very sensitive to reflected solar radiation, which makes the rougher waters (which give off a lot of sun glint) appear warmer (darker) on the shortwave IR imagery. The MODIS 3.7 µm IR brightness temperature values were about 20º C colder (denoted by the lighter gray shades) in the region of the smooth water, since there was very little solar radiation being reflected directly back toward the satellite. 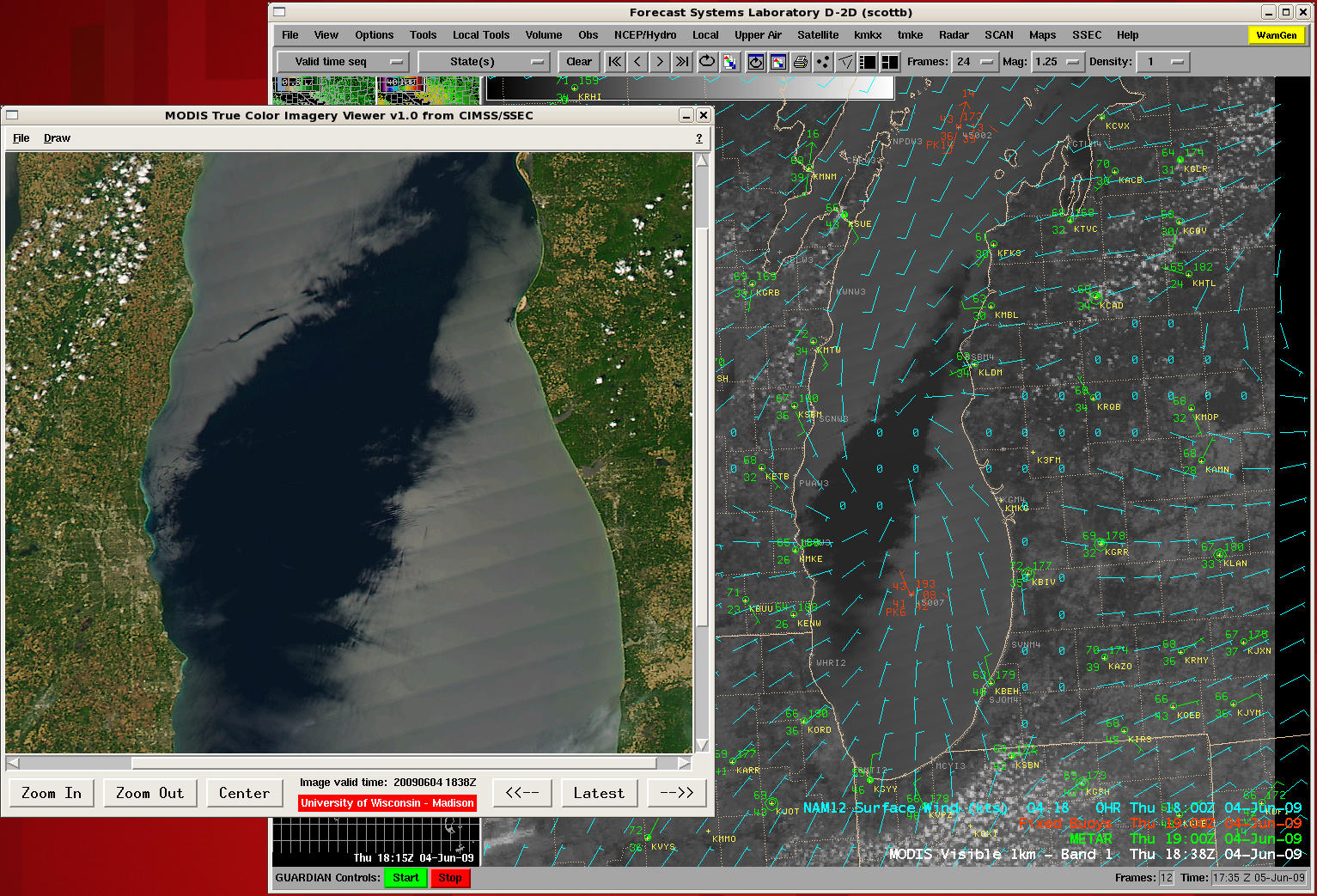 One final question remains: why wasn’t this “dark signature”  of the calm Lake Michigan waters seen on the “1-km” resolution GOES-12 visible imagery (below)? Once again, the answer revolves around the issue of sun glint: with a geostationary satellite such as GOES-12 (which is positioned over the Equator), the sun glint pattern is generally restricted to the Equatorial regions. The lack of sun glint over Lake Michigan does not allow the GOES-12 visible imagery to be useful for diagnosing areas of calm winds over the water.

A hat-tip to Kathy Strabala and Chris Moeller at CIMSS for bringing this case to our attention, and offering a physical explanation of what was going on!

Another good case of this type of “calm winds / smooth water” satellite signature presented itself on 08 June 2009 over the northern Gulf of Mexico. An AWIPS image of the MODIS visible channel (below) shows an elongated dark region that was oriented approximately west to east — but in this case, there was also a large bright spot located within the elongated dark region. Note the orientation of the Terra satellite overpass, as shown in the MODIS Orbit Itinerary Viewer to the left of the MODIS visible image: the satellite overpass was just to the left (west) of the bright spot on the visible image. This was due to the geometry of the sun and the satellite at that time: the sun was still to the east of the satellite position during the late morning hours, which affected the path of the ray of sunlight reflection such that the bright reflection spot seen on the visible image was located to the right (east) of the satellite overpass point. 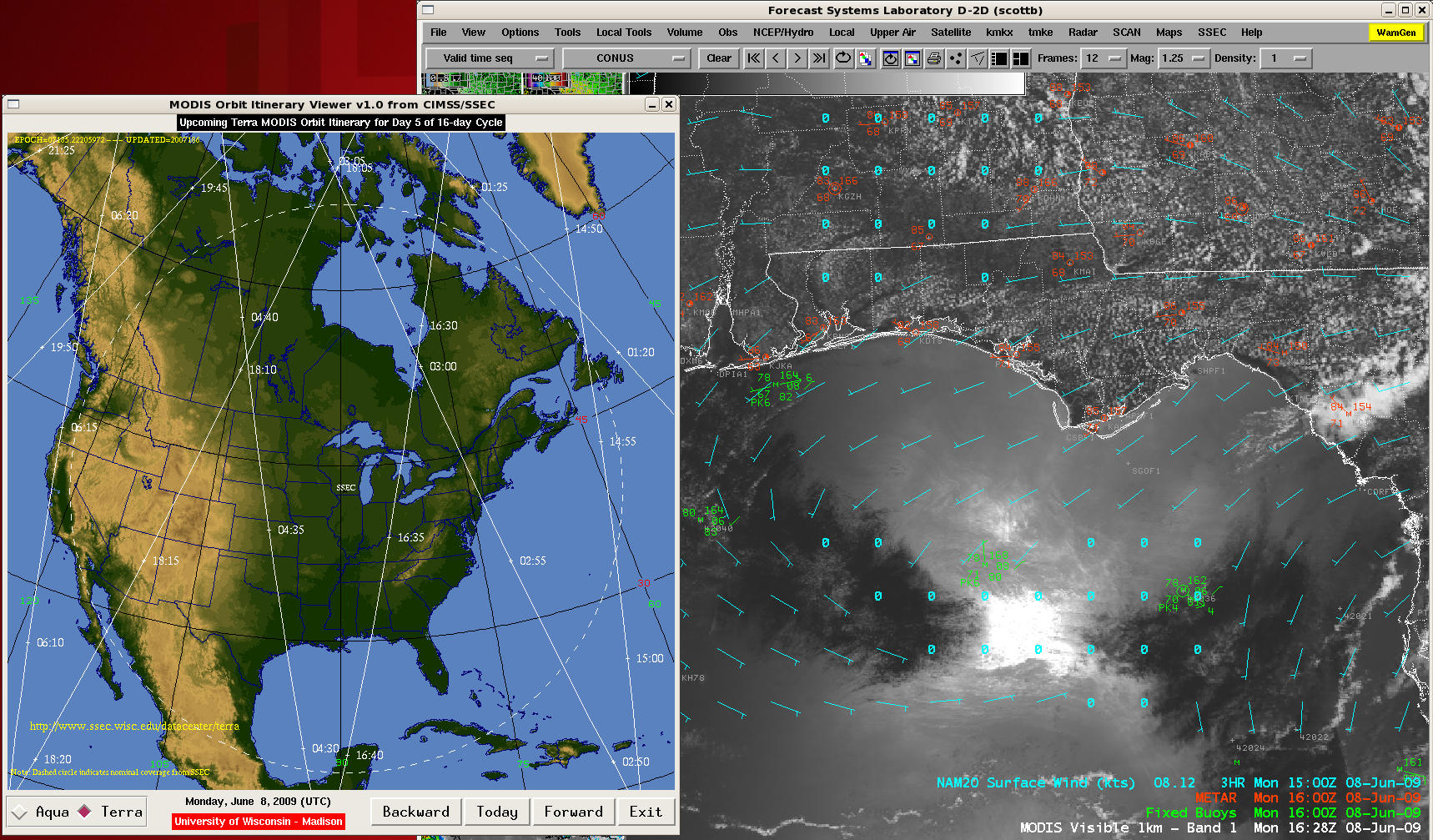 The temporal evolution of the changing satellite image appearance of such an area of calm winds / smooth water is demonstrated on GOES-12 visible and 3.9 µm shortwave IR images (below). This particular region of calm winds and smooth water was located off the Pacific coast of Central America on 09 June 2009. Note how the appearance of the area on visible imagery changes from dark to bright to dark again as the sun’s location passes overhead during the rotation of the Earth — and the brightness temperature on the shortwave IR images gets much hotter (darker black in appearance) as the reflected solar radiation becomes the dominant component in the 3.9 µm IR brightness temperature.