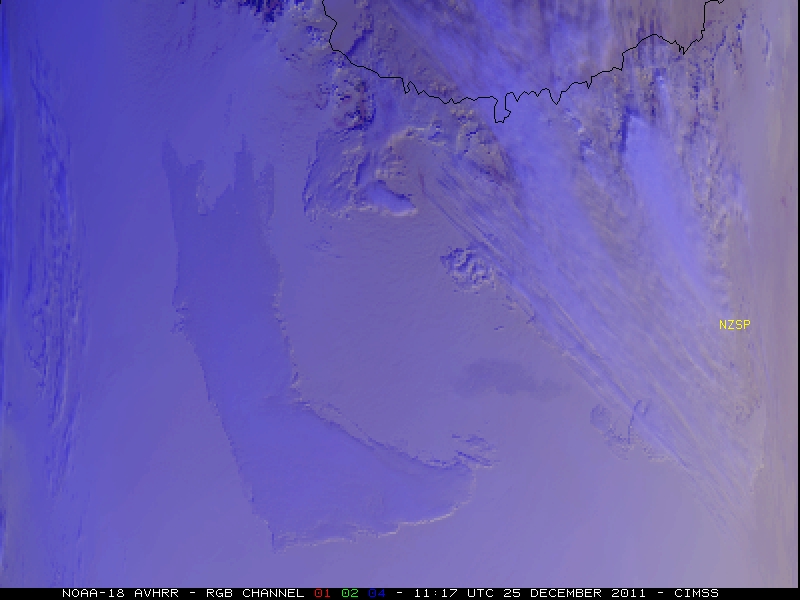 On 25 December 2011 a new all-time record high temperature of +9.9Â° F (-12.3Â° C) was set at the Amundsen-Scott South Pole Station — the previous all-time record high was +7.5Â° F (-13.6Â° C) on 27 December 1978. A NOAA-18 AVHRR false color Red/Green/Blue (RGB) image (above) displayed a variety of low cloud and high cloud features across the region at 11:17 UTC. Station identifier NZSP marks the location of the Amundsen-Scott station; the edge of the Ross Ice Shelf is at the top of the image.

A listing of available NZSP surface reports is shown below — the maximum temperature actually occurred at 02:50 UTC (15:50 local time). Note that there was also snow (S), light snow grains (SG-), or ice crystals (IC) being reported during much of the day that experienced the record high temperature!

A NOAA-18 AVHRR 3.7 Âµm shortwave IR image (above) depicted a number of patches of low altitude clouds composed of supercooled water droplets — these low cloud features appeared darker (warmer) since the shortwave IR channel is also sensitiveÂ  to the reflection of solar radiation off the cloud tops.

On the other hand, the corresponding NOAA-18 AVHRR 10.8 Âµm IR image (below) showed that there were high altitude cirrus clouds (cyan to dark blue color enhancement) in the vicinity of station NZSP. These high cirrus clouds could have been contributing to a “seeder-feeder effect” to help produce the periods of light precipitation that were observed on that day.

A EUMETSAT MetOp-A false color Red/Green/Blue (RGB) image (below; courtesy of Dave Santek, SSEC) showed the cloud features over the South Pole region at 02:52 UTC (very close to the time of the record high temperture). 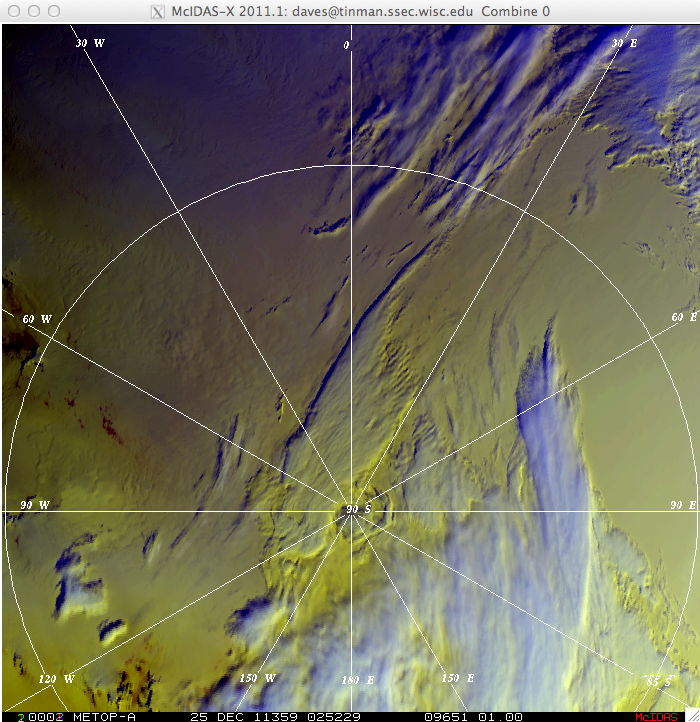 For additional satellite images and information on this event, see the Antarctic Meteorological Research Center “On the Ice” blog and The Antarctic Sun.