Wildfire activity began to increase across the northern portions of Saskatchewan and Manitoba in Canada on 30 June 2008. GOES-11 visible and 3.9 Âµm “shortwave IR” images (above) showed a number of thick smoke plumes (lighter gray features on the visible images) drifting southeastward from a large cluster of active fire “hot spots” (darker black pixels on the IR images). GOES-11 was placed into Rapid Scan Operations (RSO) during the afternoon hours, so images near the end of the animation were available at 5-7 minute intervals.

The largest fire was located between Pelican Narrows and Sandy Bay in Saskatchewan, as seen in an AVHRR false color image (below, viewed using Google Earth). A close-up view reveals that the fire had actually jumped the only road that was in that area (the seasonal road which connects Sandy Bay and Pelican Narrows). The GOES-11 shortwave IR brightness temperatures associated with this particular fire were as high as 341Âº K (68Âº C, 158Âº F), which is the saturation temperature of the 3.9 Âµm detectors on the GOES-11 satellite. Note that some small pyrocumulus clouds could be seen developing over this large and very hot fire on the GOES-11 visible imagery (above) as well as on the AVHRR false color image (below). 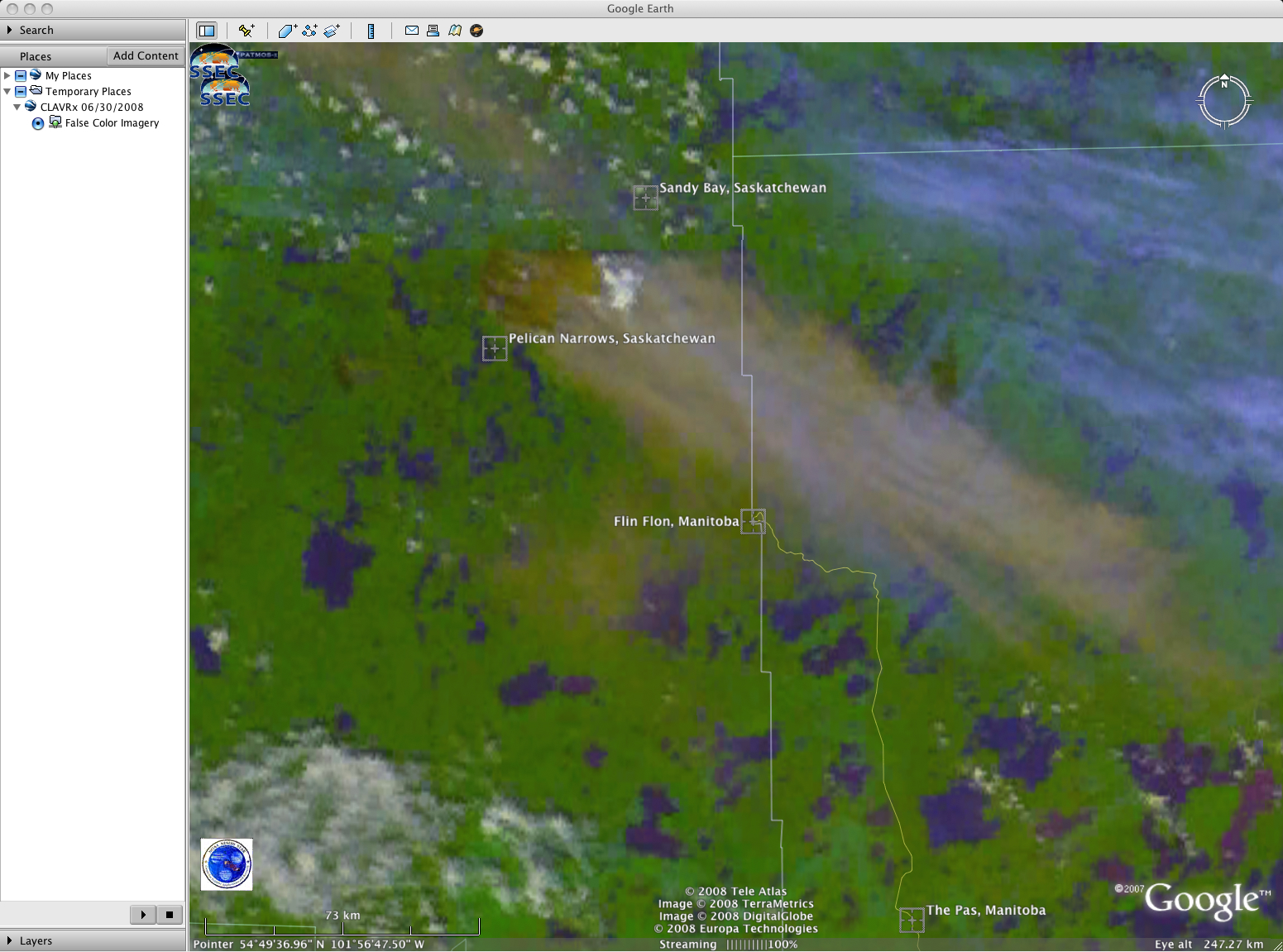 A closer view of the largest fire using AWIPS images of the 1-km resolution MODIS 3.7 Âµm and the 4-km resolution GOES-12 3.9 Âµm IR channels (below) shows the advantage of higher spatial resolution for displaying the shape and coverage of not only the largest fire cluster (located near the center of the image), but also the smaller fires in outlying areas. Many of the pixels were so hot that the IR brightness temperatures exceeded the 54.5Âº C upper threshold for AWIPS display, and showed up as black pixels (registered as “NO DATA“) on the imagery. The smoke from this fire was restricting surface visibility to 1 mile at Flin Flon (CYFO) and 3 miles at The Pas (CYQD) in Manitoba, even though those 2 sites were not in the direct path of the thickest portion of the smoke plume.

Some clues as to the locations of the hottest portion of the fire — which happened to be located within the eastern half of the active fire area, where the black “NO DATA” pixels were seen on the MODIS shortwave IR image — could be found by examining other MODIS images and products: note the darker black pixels on the 11.0 Âµm “IR Window” channel, the brighter white pixels on the 2.1 Âµm near-IR “Snow/Ice” channel, and the darker red pixels on the Land Surface Temperature (LST) product (below). AWIPS cursor sampling indicated that the hottest pixel on the IR Window image was 52Âº C (126Âº F), while the hottest pixel on the LST image was significantly warmer at 145Âº F (63Âº C).