On the morning of 08 May 2008, we received the following email from David Zaff, Science and Operations Officer at the National Weather Service Forecast Office at Buffalo NY:

The NWS BUF office was marveling over the fine line starting from below the thumb of MI through Toronto and along the northern edge of Lake Ontario, but we had a hard time describing why it was there. A cold front had moved through overnight with widespread rain and this boundary appeared as the main synoptic event passed. It doesn’t appear to be tied to land/lake interactions or terrain. It’s clearly drier on one side and more moist on the other with a cap in place. There are also some neat gravity waves that pass into lake Ontario as the flow passes over the boundary when looping the vis earlier in the day.

Great question Dave, and a very interesting satellite imagery example! After some initial pondering, the satellite geeks at CIMSS came to the consensus that the sharp quasi-stationary cloud boundary seen on GOES-12 visible channel images (above, oriented WSW to ENE across lower Michigan,Â  southern Ontario, and northern Lake Ontario) was possibly due to an atmospheric hydraulic jump. A hydraulic jump can occur when fluid flow at a higher velocity discharges into a zone of lower velocity — a thinner layer of faster, laminar flow abruptly transitions to a deeper layer of slower, more turbulent flow.

But why would a hydraulic jump cause the sharp clearing line seen in the field of cumulus clouds? The answer might lie in the vertical structure of the atmosphere over that region; rawinsonde data plotted for Gaylord, Michigan, Detroit, Michigan and Buffalo, New York (below) revealed that a very strong subsidence inversion existed over lower Michigan that morning. The base of the temperature inversion (which was most dramatic at Detroit, yellow sounding plot) was around 900 hPa, with very dry air in place above that level — if turbulent flow associated with the hydraulic jump acted to rapidly entrain some of that very dry air to lower altitudes, such a marked cloud clearing could result. 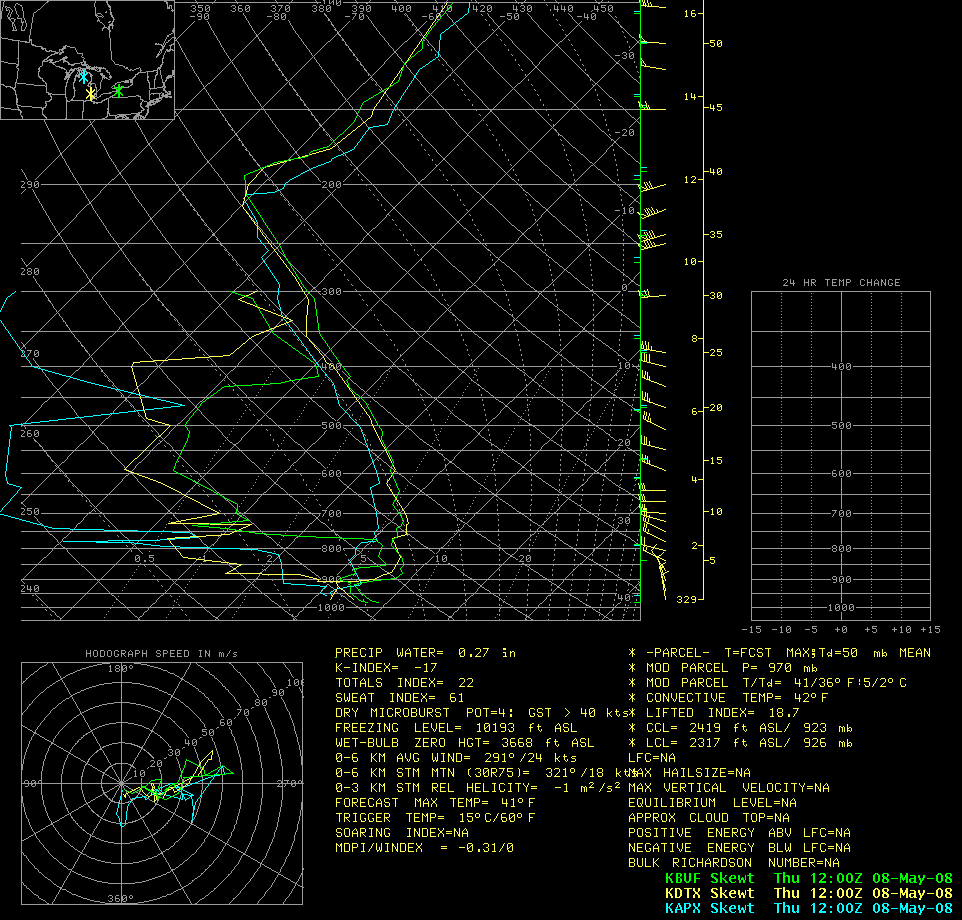 GFS40 model fields (below) indicated that there was a weak post-frontal trough at 850 hPa, with a band of convergence just ahead of the trough axis that seemed to correspond to the sharp cloud boundary on the GOES-12 visible imagery. Such a band of convergence is consistent with the idea of “higher-velocity flow discharging into a zone of lower velocities” — the slowing of the flow would effectively create convergence. 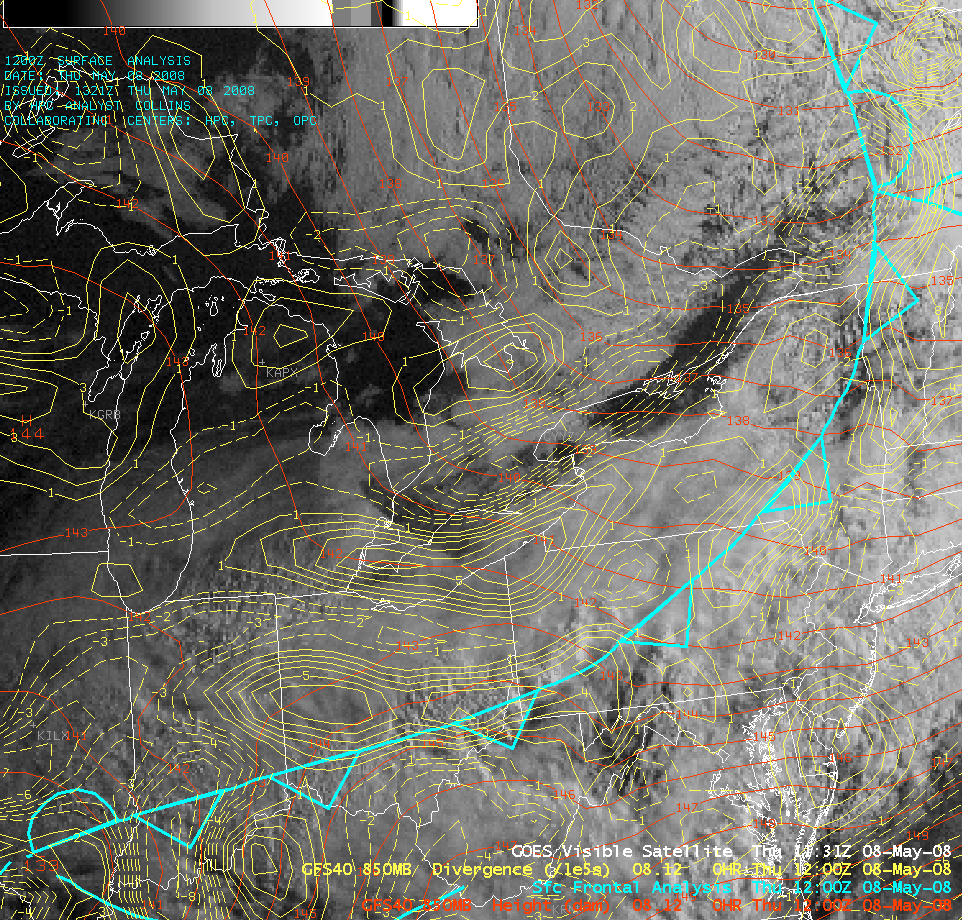 A vertical cross section using initial condition (0-hour forecast) fields from the GFS40 model (below) showed the very low relative humidity values that existed above the low-level temperature inversion (over the northern 2/3 of the cross section area). Both the model ageostrophic vertical circulation and the omega fields suggested that there was a shallow region of boundary layer downward motion overÂ  southern Ontario, approximately where the hydraulic jump and cloud clearing line were located around 12 UTC.

In addition to the hydraulic-jump-induced sharp cloud clearing line seen on GOES-12 visible imagery, there was also evidence of a downstream undular bore; parallel cloud bands were apparent on 250-meter resolution MODIS true color imagery (from the SSEC MODIS Today site) centered over western Lake Ontario (below), as well as farther to the west over Lower Michigan. 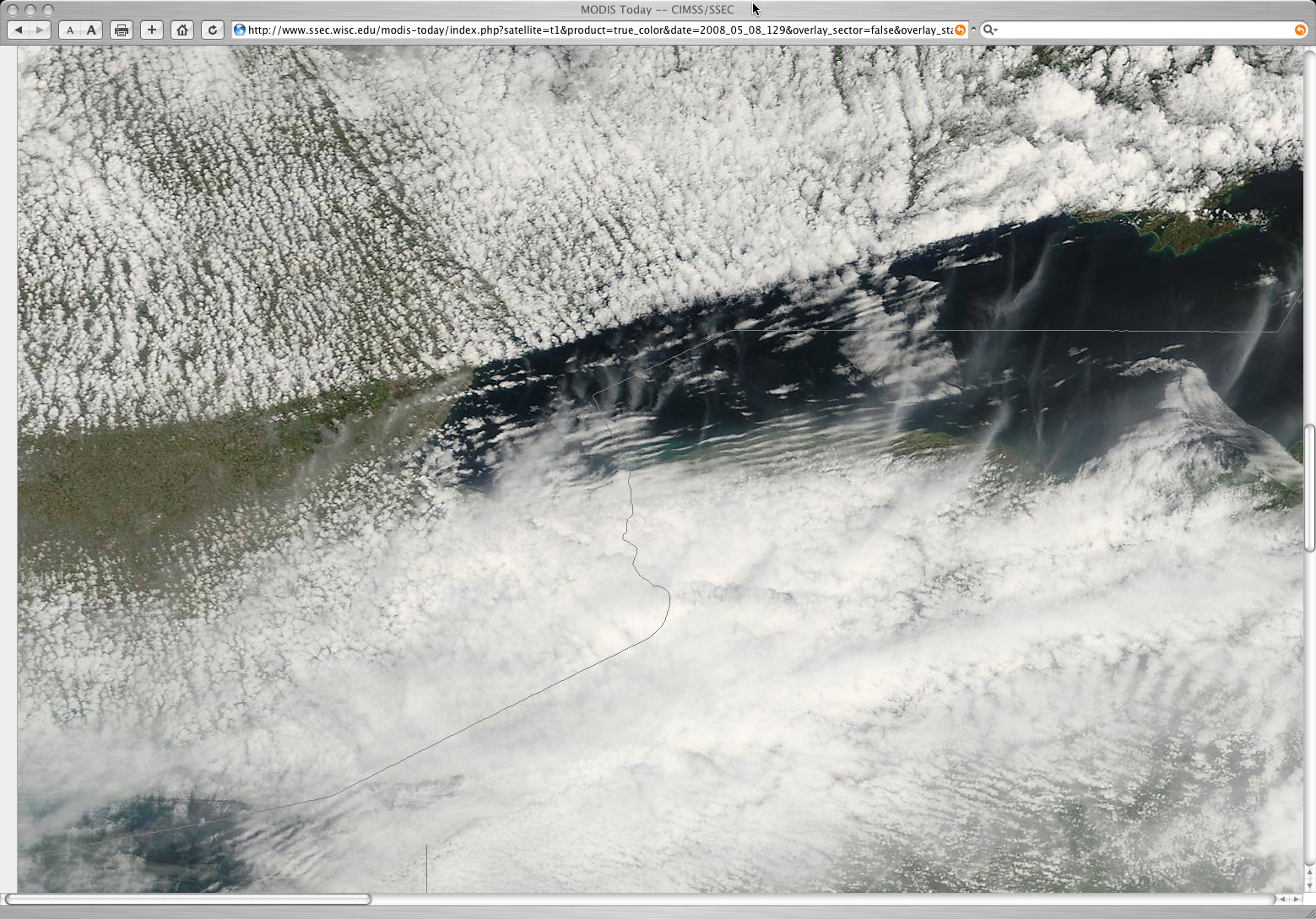 Another question that remains is: what role (if any) did topography play in the formation and/or maintenance of such a hydraulic jump? An AWIPS topography image (below) shows that there is some slightly higher terrain overÂ  southern Ontario, but the general orientation of the topography does not match that of the sharp clearing line seen on satellite imagery. 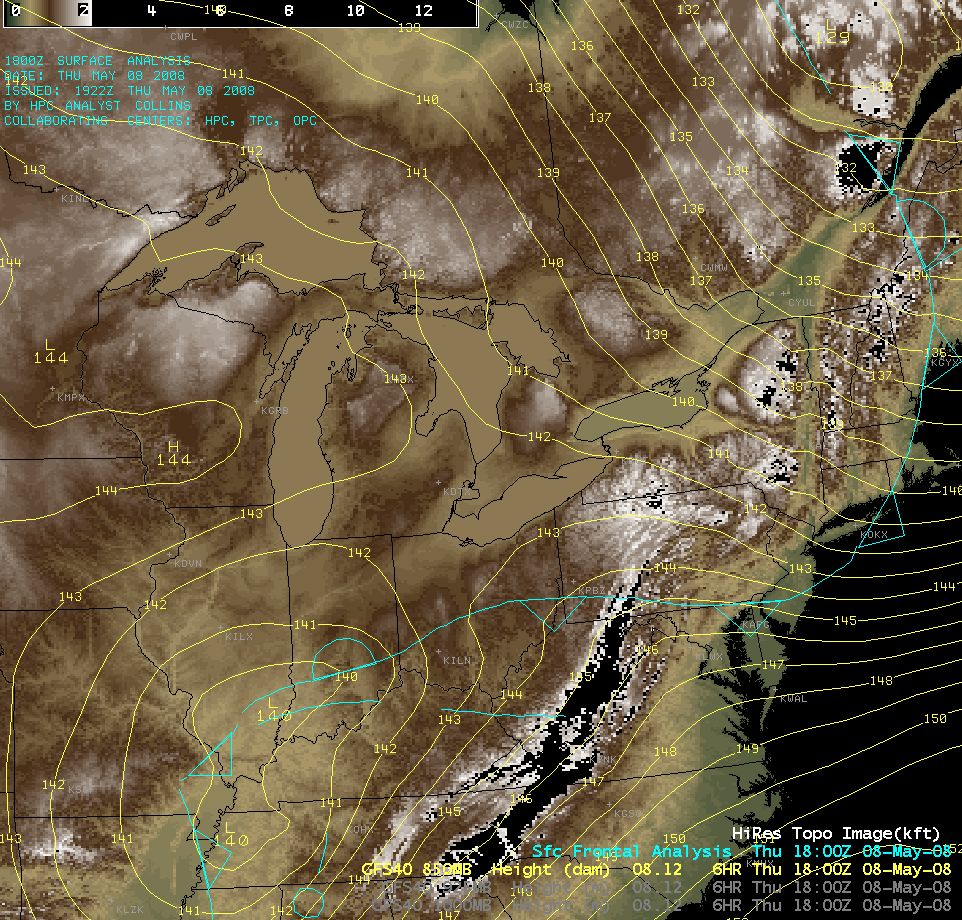