The Sweat Farm Road / Big Turnaround fire complex (that started on 16 April 2007) has become the largest wildfire in Georgia history, burning over 472,000 acres so far. A series of daily (21:45 UTC) GOES-12 visible images (above) shows that the smoke plume drifted in different directions on various days due to shifting winds. A similar series of daily (21:45 UTC) GOES-12 3.9Âµm IR images (below) indicated that this was also a very hot fire (darker pixels = hotter brightness temperatures) — on many days the IR images revealed a saturation of the GOES-12 shortwave IR detectors (causing the temperature of the fire pixels to “roll-over” and be displayed as “cold” white pixels). The fire appeared to diminish somewhat on 27 April (note the smaller smoke plume and less intense fire hot spot on that day), but then it intensified the following day (and another new fire started just to the northwest).

A 3-channel red/green/blue (RGB) composite image using the Terra MODIS channels 07, 02, and 01 (below) shows the large size of the resulting burn scar that covered a significant portion of the southern half of Ware county Georgia on 30 April. The active fires that were still burning on that day were evident by the red-colored “hot spots” along the southeastern edge of the burn scar — the leading edge of the active fires had moved southward into extreme northern Charlton county. The new fire that started just to the northwest (in Atkinson county) a day earlier was also exhibiting a pronounced hot spot and smoke plume. 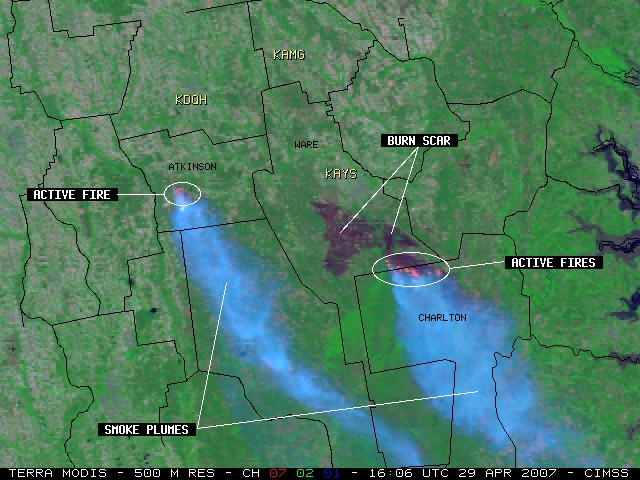