A lee-side frontal gravity wave was seen on GOES-12 6.5Âµm “water vapor” imagery (above; Java animation) — this feature was associated with a cold frontal boundary that was moving southward across eastern New Mexico and western Texas on 03 April 2007. These types of vertically-propagating gravity waves are stationary with respect to the flow (they follow the cold front) and are forced by nongeostrophic and nonhydrostatic accelerations in the frontal zone (these waves above frontal surfaces are dynamically equivalent to stationary “trapped lee waves” that appear over mountains). Wave breaking induces narrow zones of subsidence that can be sensed as warm/dry bands on the water vapor imagery. Note that the “wave signature” was not readily apparent on the 8-km resolution GOES-11 water vapor channel image; the gravity wave packet eventually became less obvious on GOES-12 4-km resolution water vapor imagery after about 17 UTC, but was still evident on 1-km resolution MODIS water vapor channel imagery at that time. A comparison of GOES-12 visible and water vapor imagery indicates that no clouds were forming along the cold frontal zone in the New Mexico / Texas border region; however, the vertically-propagating gravity waves along the far western end of the front appeared to generate cirrus cloud patches in the foothills of New Mexico.
.
AWIPS images of NOAA wind profiler data (below) show that the depth of the cold air was fairly shallow, with winds shifting to northeasterly within the lowest 1 km of the atmosphere at Tucumcari, New Mexico (TCUN5) and Jayon, Texas (JTNT2) as the front moved southward through those locations. Even though the GOES-12 water vapor channel weighting function (calculated using Amarillo, Texas rawinsonde data) peaked at around 450 hPa (about 6.5 km above the surface), a signal of the vertically-propagating wave breaking above the top of the cold front was still evident on the water vapor channel imagery. 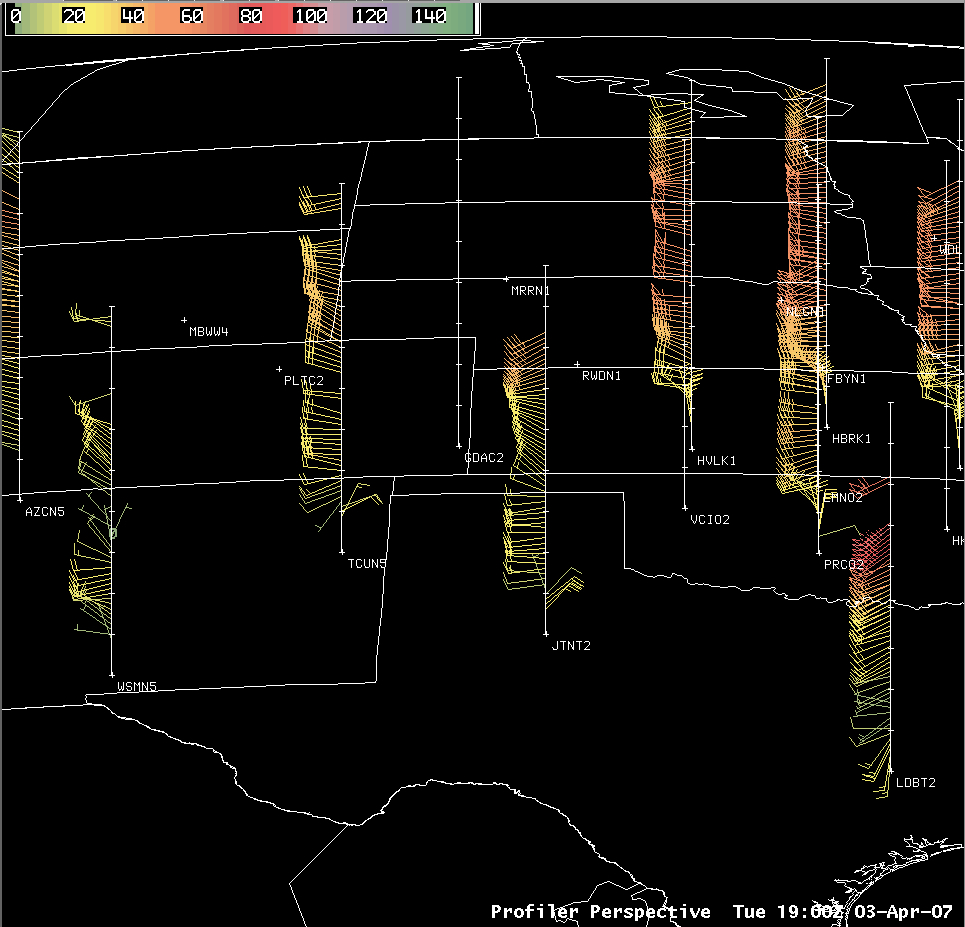