1-minute Mesoscale Domain Sector GOES-17 (GOES-West) “Red” Visible (0.64 µm) images (above) showed the development of thunderstorms over the far southern end of the Alaska Panhandle on 27 June 2019. These storms intensified as they moved southeastward toward the Misty Fjords area of Alaska (located east and southeast of Ketchikan PAKT) — and when a significant lightning jump was noted with the strongest storm, NWS Juneau issued their first-ever Severe Thunderstorm Warning at 0249 UTC. A few thunderstorm overshooting tops could be seen in the visible images (for example, at 0230 UTC).

The Severe Thunderstorm Warning polygon is shown below. 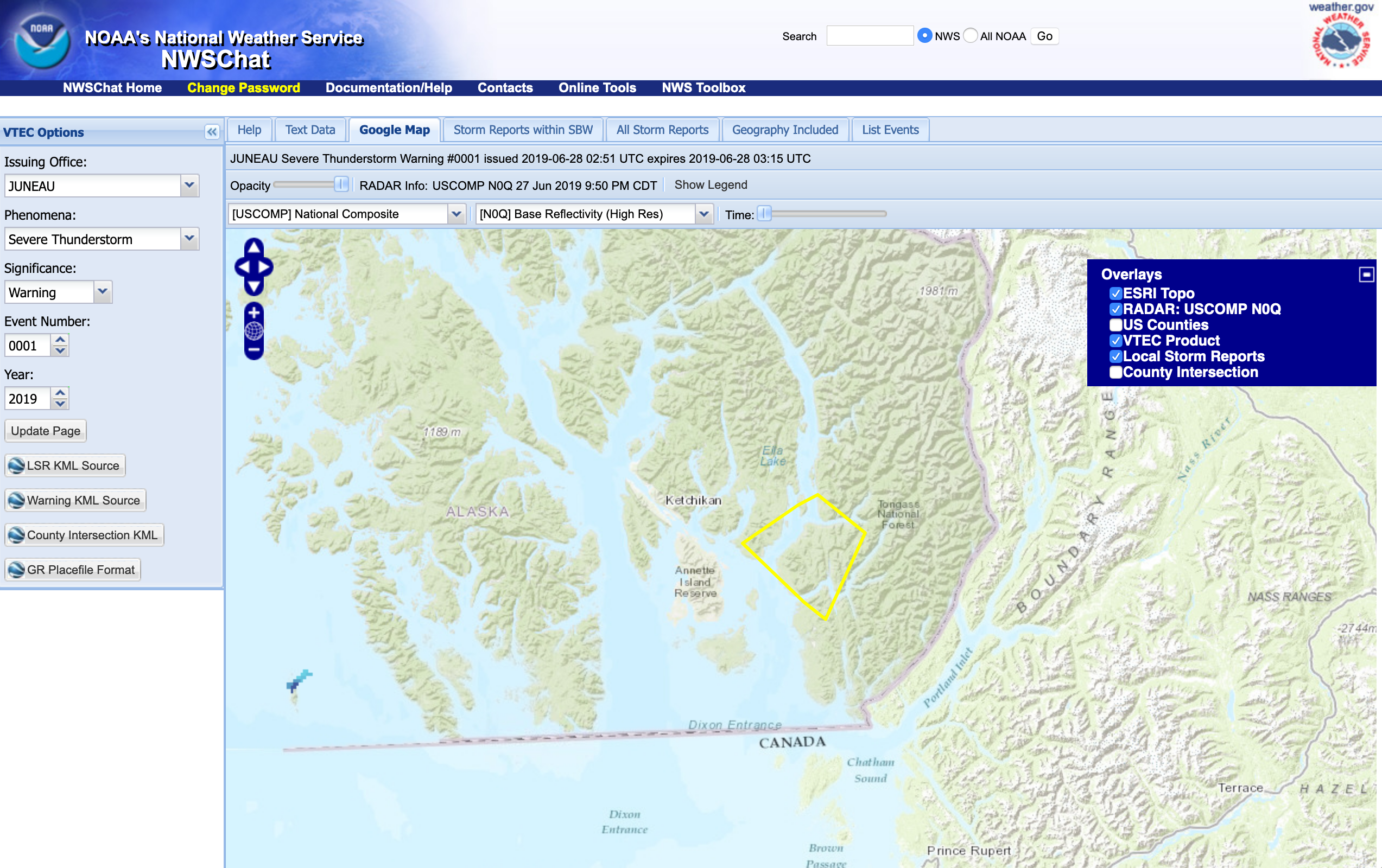 A comparison of GOES-17 “Red” Visible (0.64 µm) images at 1-minute intervals with GOES-15 Visible (0.63 µm) images at 15-30-minute intervals (below) helps to underscore the importance of 1-minute imagery for identifying and tracking the pulse-type of thunderstorms that developed on this day. Also evident is the brighter appearance of the GOES-17 Visible imagery — the ABI instrument on the newer GOES-R Series benefits from on-orbit visible calibration, which mitigates the visible detector degradation that plagued the older GOES series.

Additional information about this severe thunderstorm event is available on a FDTD GOES Applications Webinar.

On a side note, a larger-scale view of GOES-17 Visible imagery (below) showed a curious thin elongated feature moving southwestward from Yukon across the Alaska Panhandle to the Gulf of Alaska, which became more obvious later in the day as the lower sun angle increased forward scattering. This feature was casting a shadow onto the marine boundary layer stratus clouds over the Gulf of Alaska (0250 UTC image). 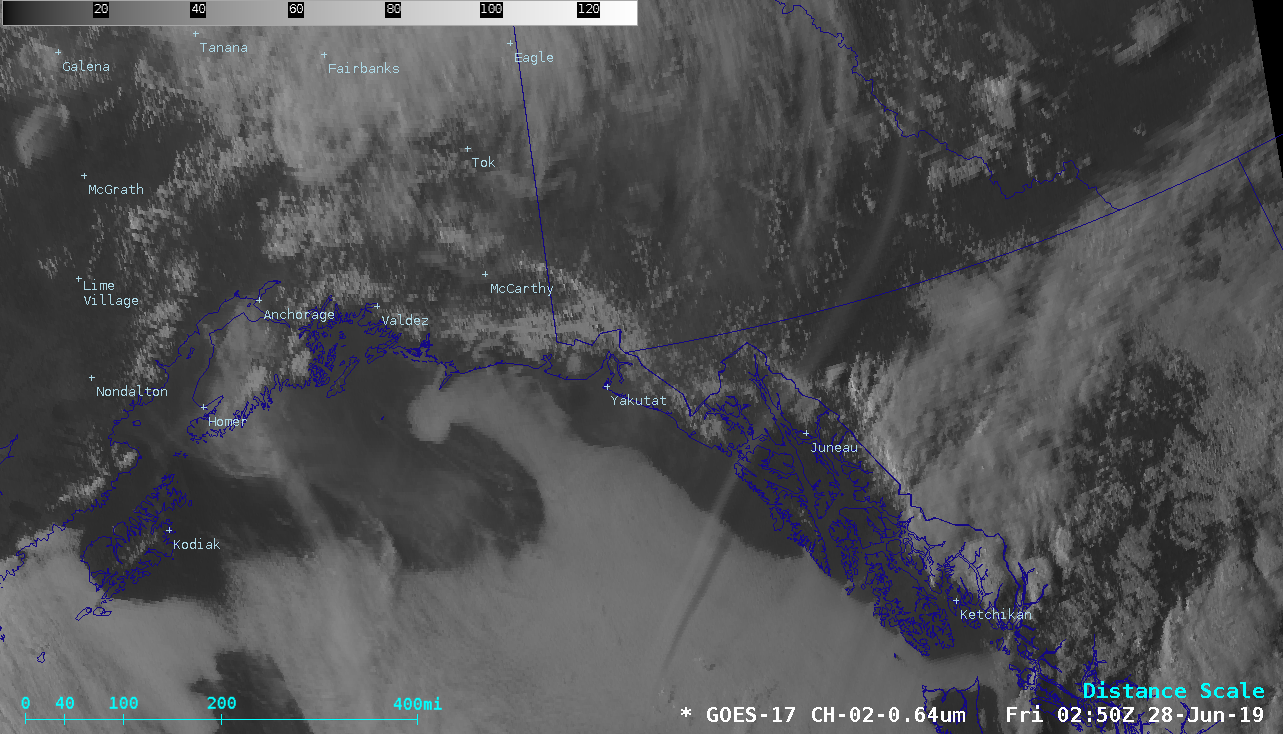 This feature was also apparent in GOES-17 Near-Infrared “Cirrus” (1.38 µm) images (below), since that spectral band excels at the detection of atmospheric particles that are efficient scatterers of light (such as cirrus ice crystals, dust, smoke and volcanic ash/sulfate). In fact, this was a streamer of high-altitude sulfate from the Raikoke eruption on 21 June — and this thin volcanic filament could be unambiguously identified earlier in Cirrus imagery than in Visible imagery (for example, over Yukon at 1950 UTC, before forward scattering became large enough to aid identification at visible wavelengths). 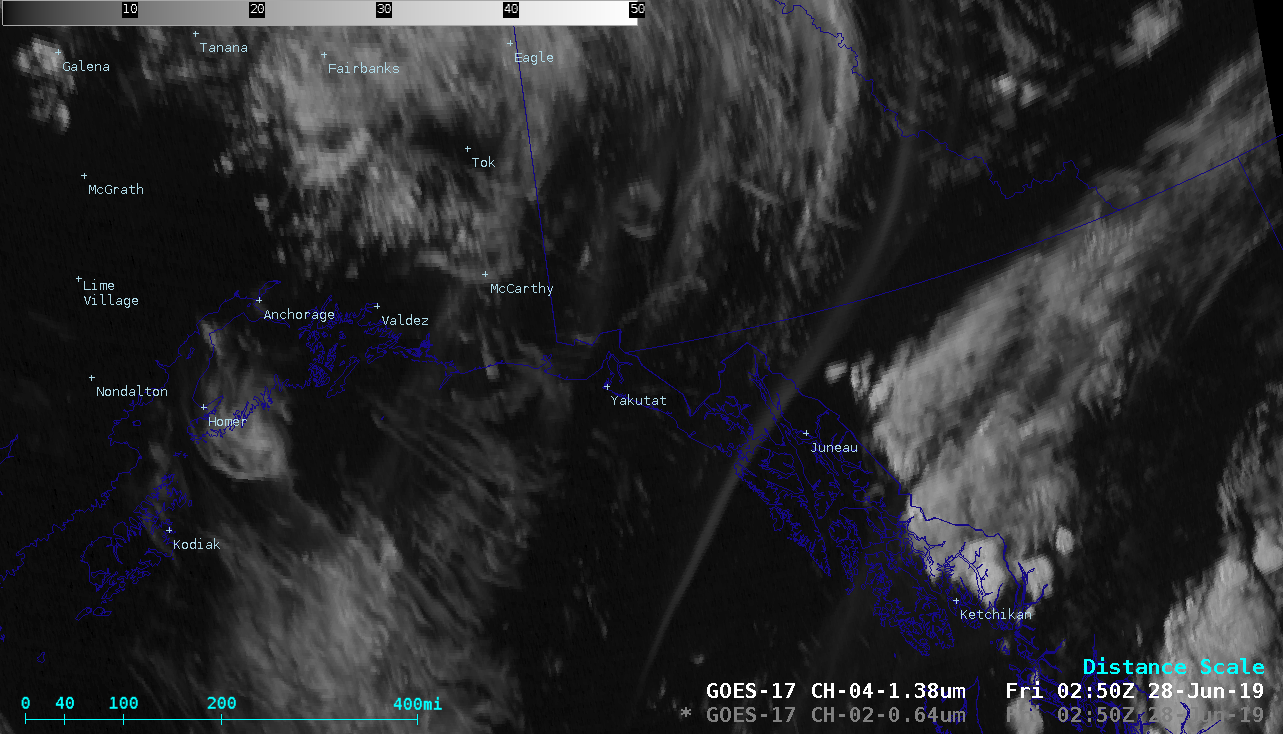