During Day 2 (08 December 2006) of the GOES-13 post-launch NOAA science test, a cold and dry air mass was moving eastward over the southern Great Lakes region; “water vapor channel” images from the GOES-13 and GOES-12 imagers (above) displayed what appeared to be a typical pattern of 6.5Âµm brightness temperature values. However, a Java animation of the GOES-13 and GOES-12 water vapor channel imagesÂ  (with the map overlay removed) shows the outline of the southern portion of Lake Michigan as the pocket of driest air moved across that area.

Detecting surface-based features (or geographical boundaries) on the 6.5Âµm GOES imager water vapor channel is somewhat unusual, since the radiation sensed by that channel normally originates from the middle troposphere (generally from within the 500-300 hPa layer, or 5-9 km above the surface in a US Standard Atmosphere). However, on this particular day, the air mass located over the Upper Midwest region was rather cold and dry — the GOES-12 water vapor weighting function calculated using the rawinsonde data from Davenport, Iowa at 12 UTC on 08 December (below) indicates that a significant contribution to the water vapor channel radiance at that location was coming from altitudes as low as the 600-700 hPa layer. The warm waters of Lake Michigan were surrounded by relatively cold land surfaces (GOES-13 10.7Âµm IR image with surface temperature reports), and a signal from this strong thermal contrast was bleeding up through what little water vapor was present within the atmospheric column, allowing the outline of Lake Michigan to be detected on the GOES-12 and GOES-13 water vapor channel imagery. 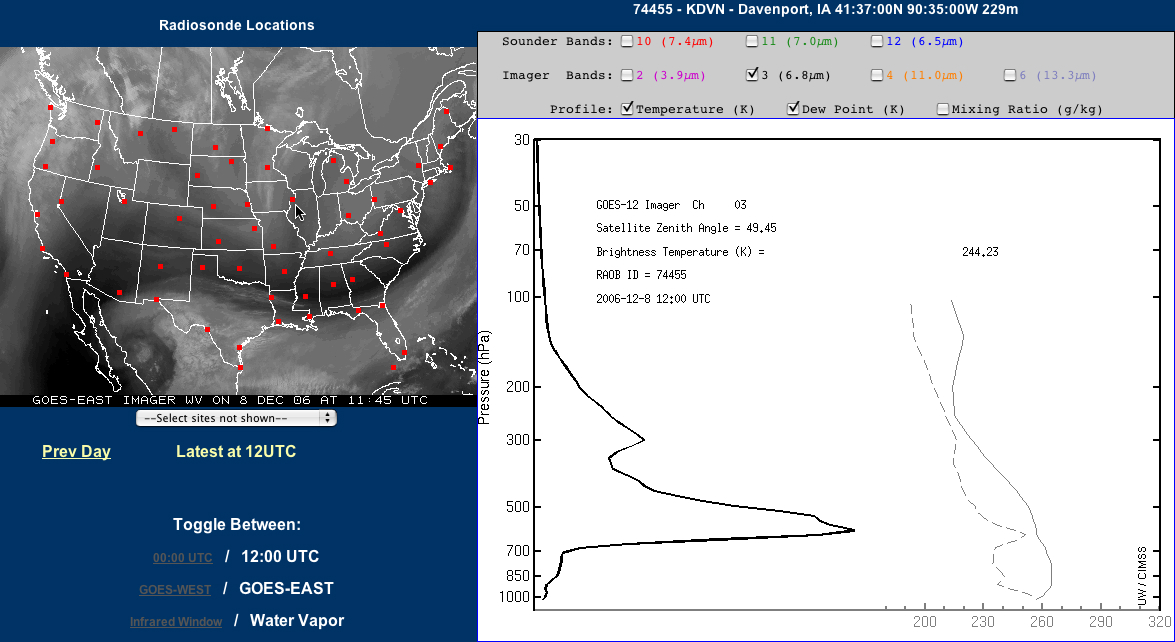