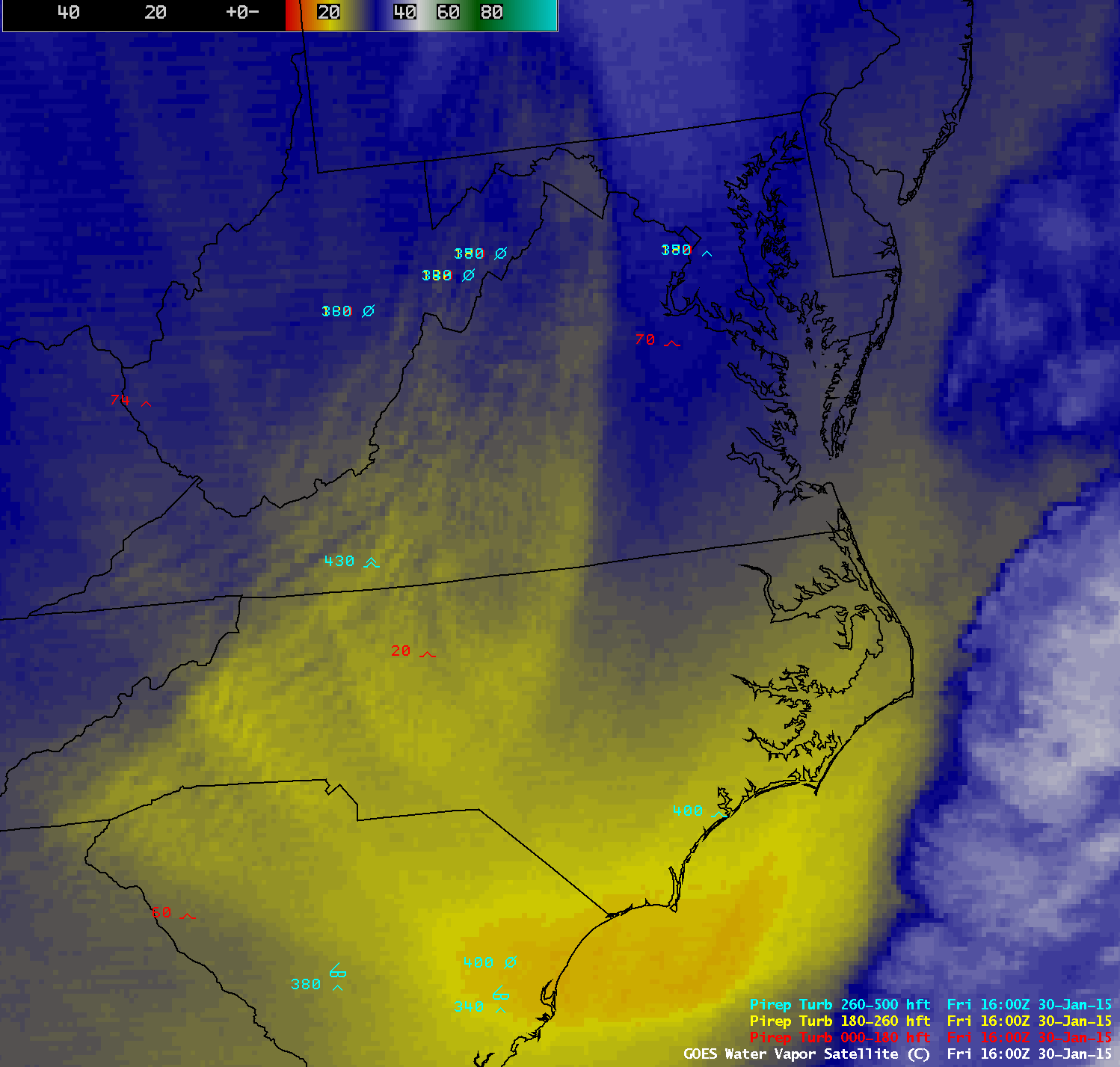 GOES-13 6.5 µm water vapor channel images (above; click to play animation) showed dry air (brighter yellow to orange color enhancement) moving across the Mid-Atlantic and Southeast regions of the eastern US in the wake of a strong cold frontal passage on the morning of 30 January 2015. There were also numerous pilot reports of turbulence, at both low altitudes (plotted in red) and high altitudes (plotted in cyan).

The most obvious feature seen on the GOES-13 water vapor images was the “rippled” signature of mountain waves, which extended far to the lee (southeast) of the Appalachian Mountains (the topographical obstacle to the strong northwesterly boundary layer flow that was causing the waves to initially form). A comparison of 4-km resolution GOES-13 6.5 µm water vapor and 1-km resolution Aqua MODIS 6.7 µm water vapor images (below) demonstrated the benefit of higher spatial resolution for diagnosing the areal coverage of such small-scale mountain waves. Of special note is the pilot report of “severe to extreme” turbulence at 4000 feet over South Carolina.

A comparison of the MODIS 6.7 µm water vapor channel image with the corresponding MODIS 0.65 µm visible channel image (below) showed that the severe to extreme reports in North and South Carolina were examples of Clear Air Turbulence (CAT), since no clouds were apparent in those areas at the time.

Regarding the numerous high-altitude pilot reports of moderate to severe turbulence, the NAM80 model depicted a 120-knot jet streak over South Carolina at 12:00 UTC, with another 120-knot jet streak approaching from the middle Mississippi Valley region (below). Note that there was strong wind speed shear to the north of the jet stream axis, which is where the bulk of the pilot reports of turbulence were located. Quite often there is an obvious moist-to dry gradient water vapor signature along or just poleward of a strong jet streak axis — but such a signature was not seen with this particular event. 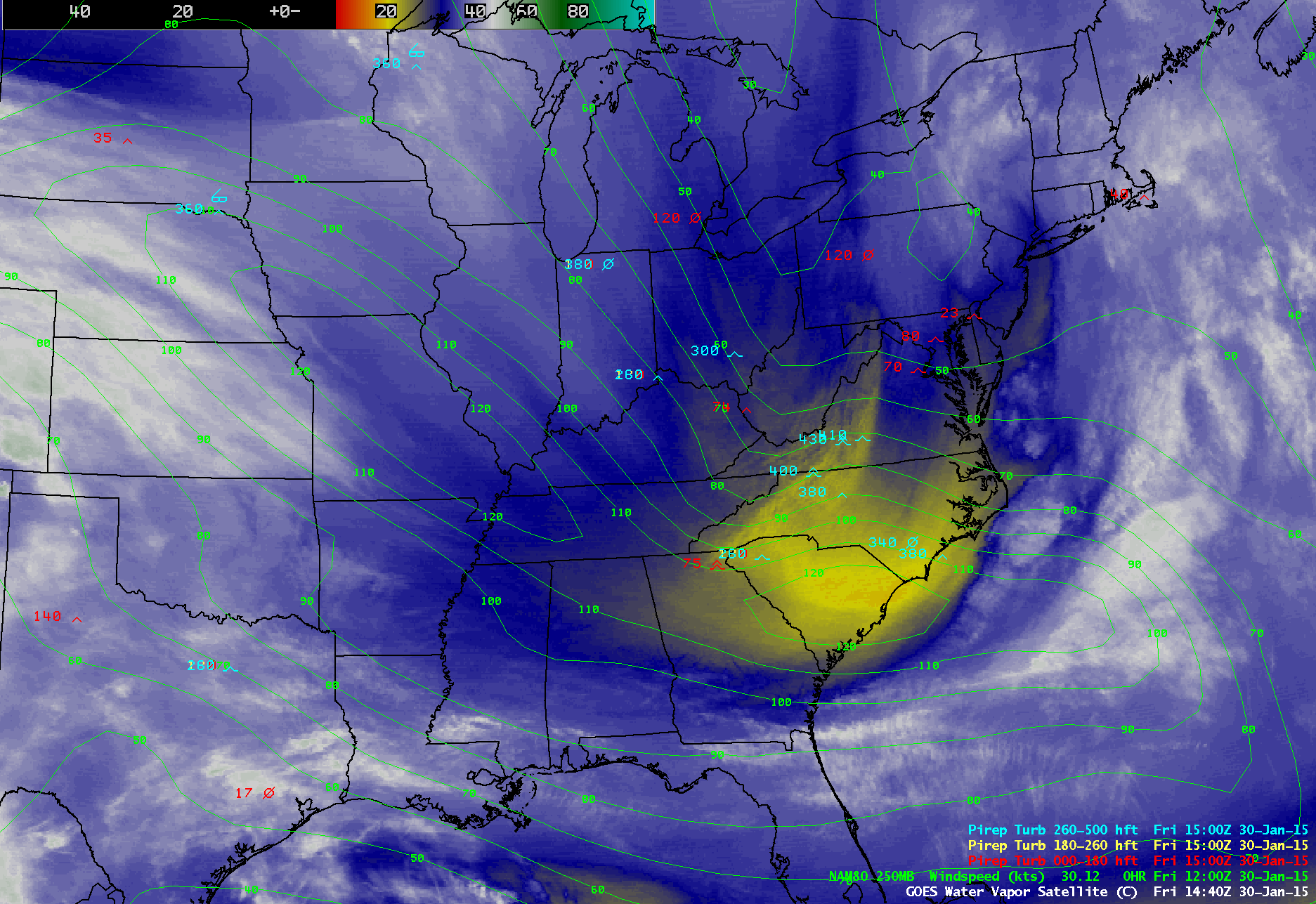 In response to some of these pilot reports, at 16 UTC a SIGMET (SIGnificant METeorological advisory) was issued for occasional severe turbulence due to jet stream wind shear (below). 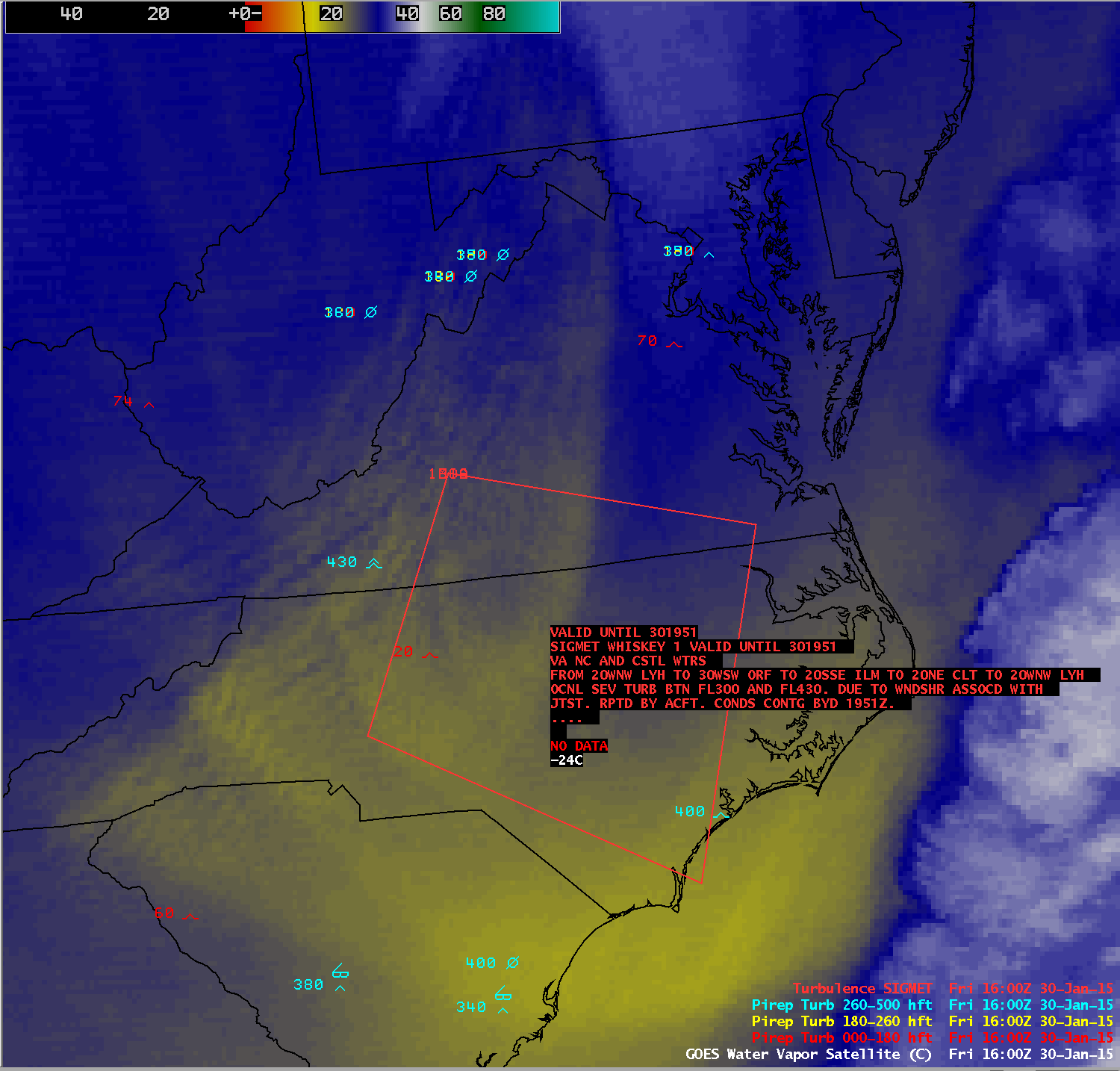 4-panel images showing the three GOES-13 Sounder water vapor channels (6.5 µm, 7.0 µm, and 7.4 µm) along with the conventional GOES-13 Imager 6.5 µm water vapor channel (below; click to play animation) showed how each channel helped to identify where the pockets of middle-tropospheric dry air were located. 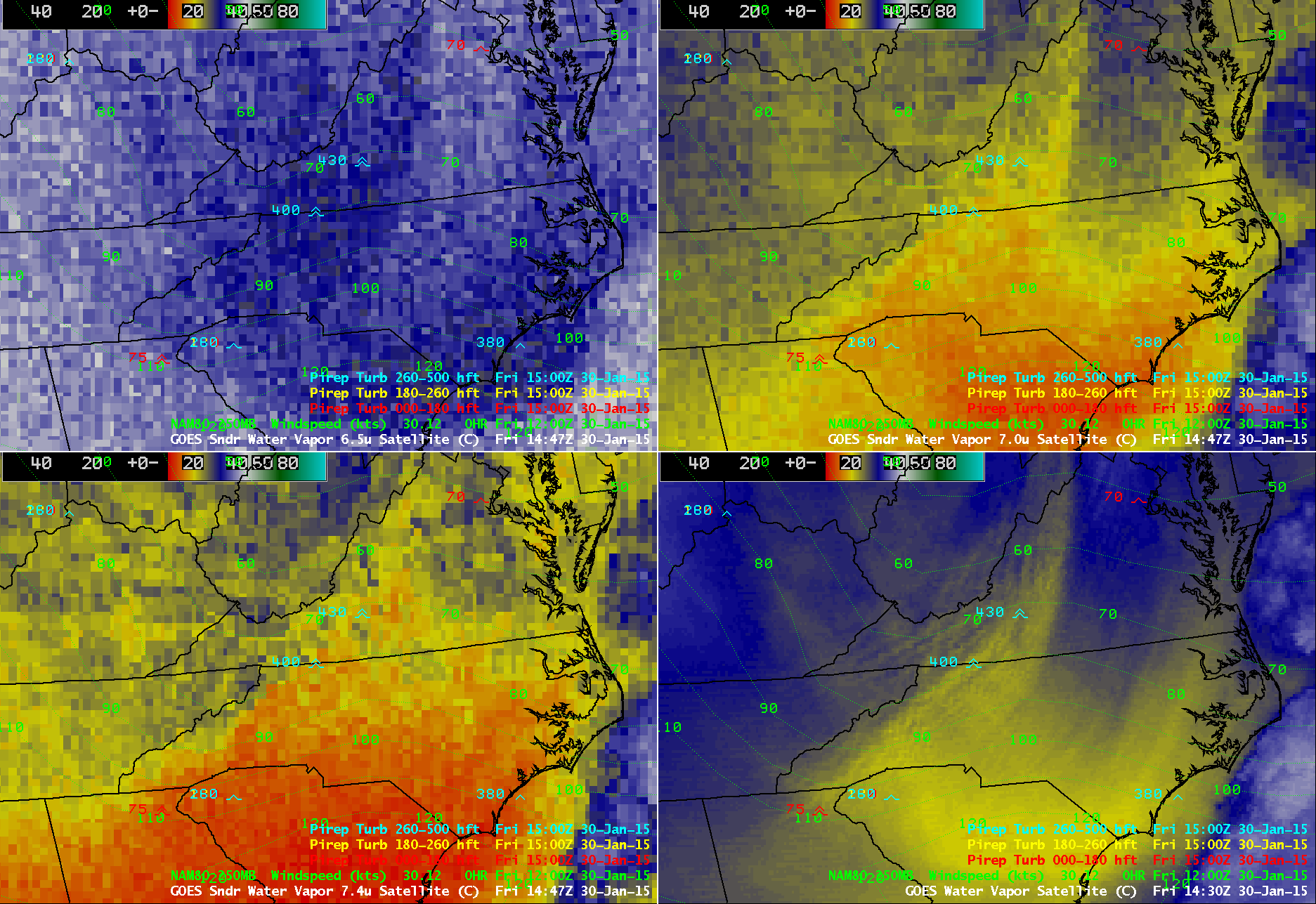 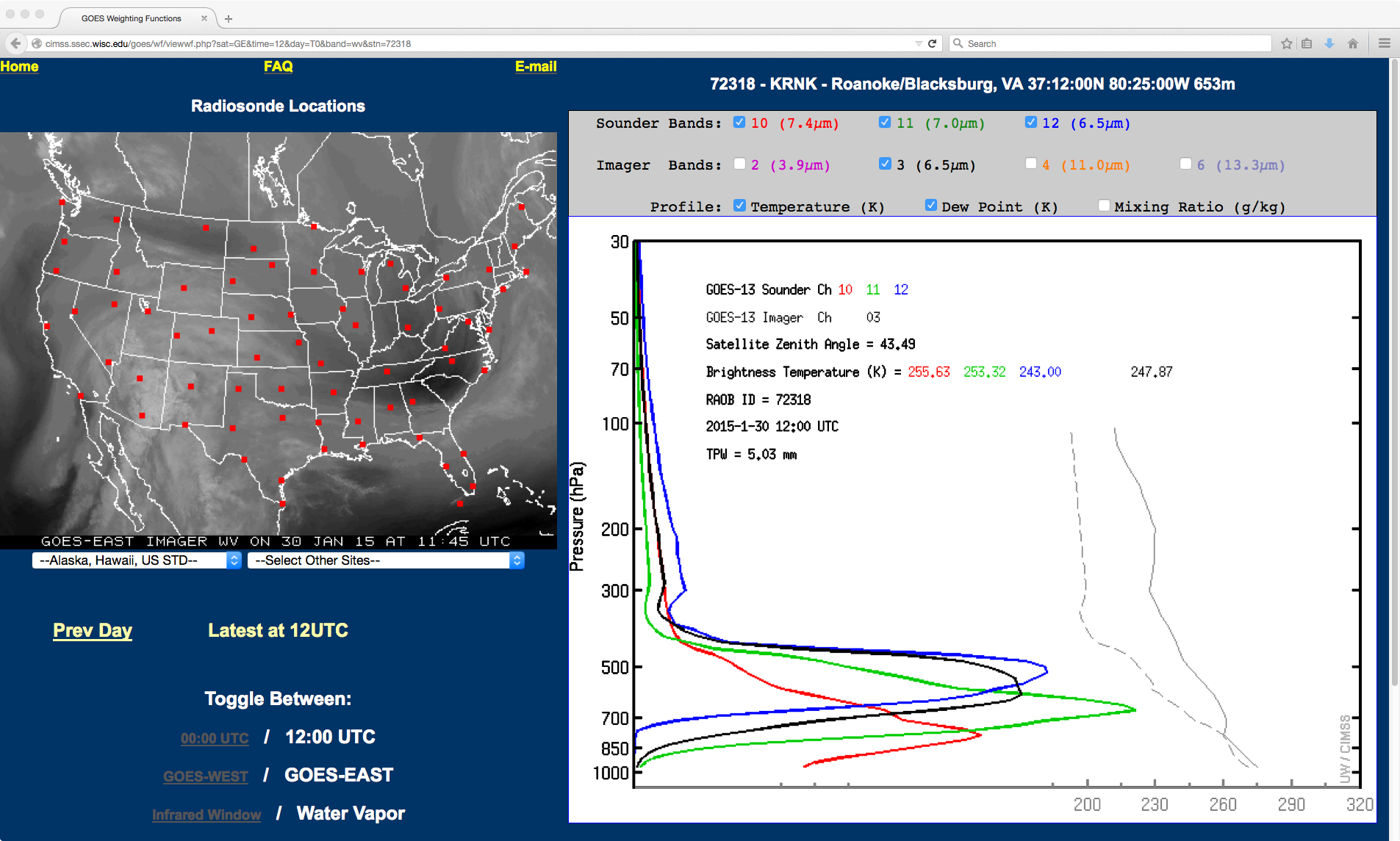 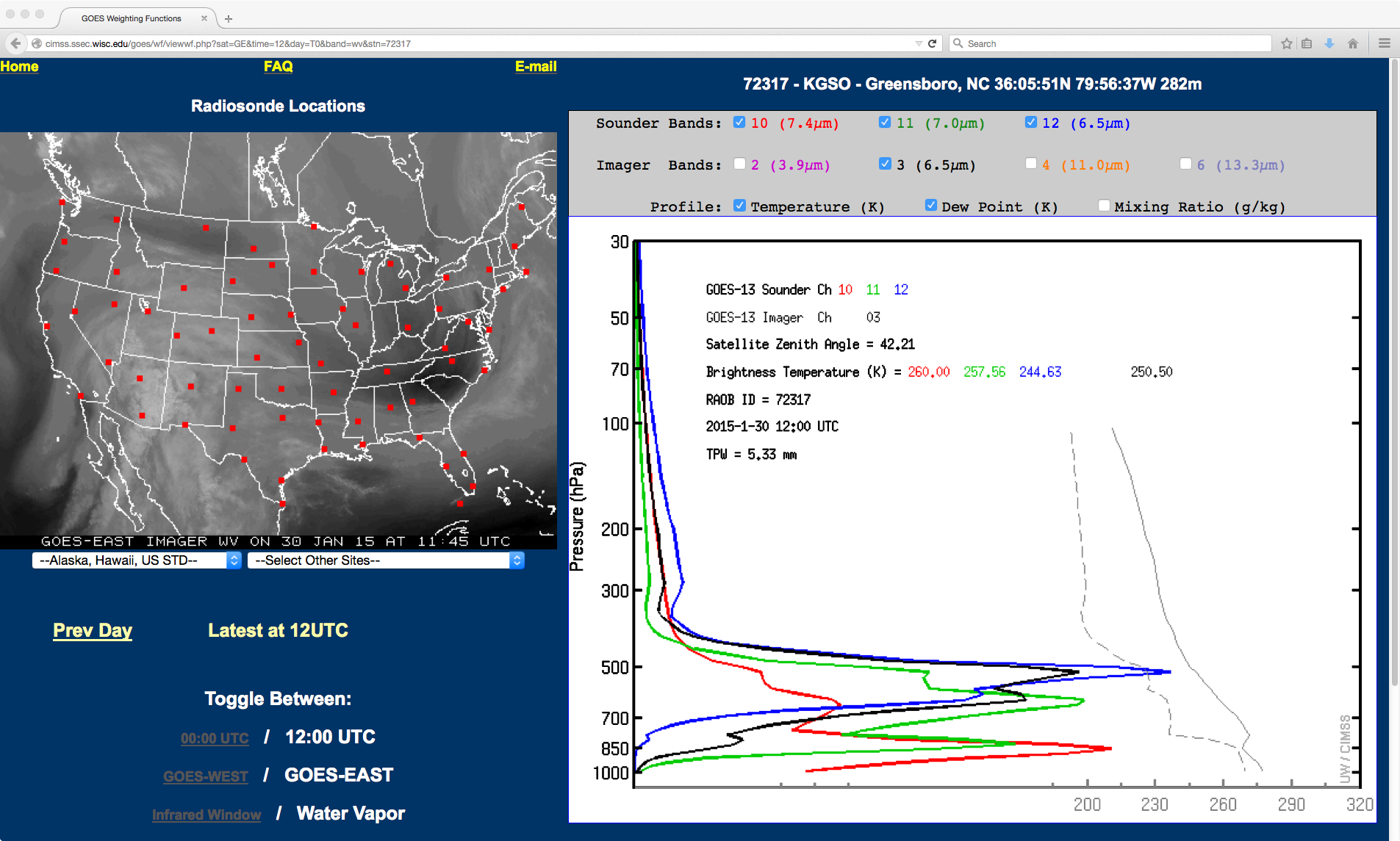 Compare the 2 examples above with the altitude peaks of the various GOES-13 Sounder and Imager water vapor channels under “normal” conditions, plotted using the US Standard Atmosphere as the sounding profile (below). 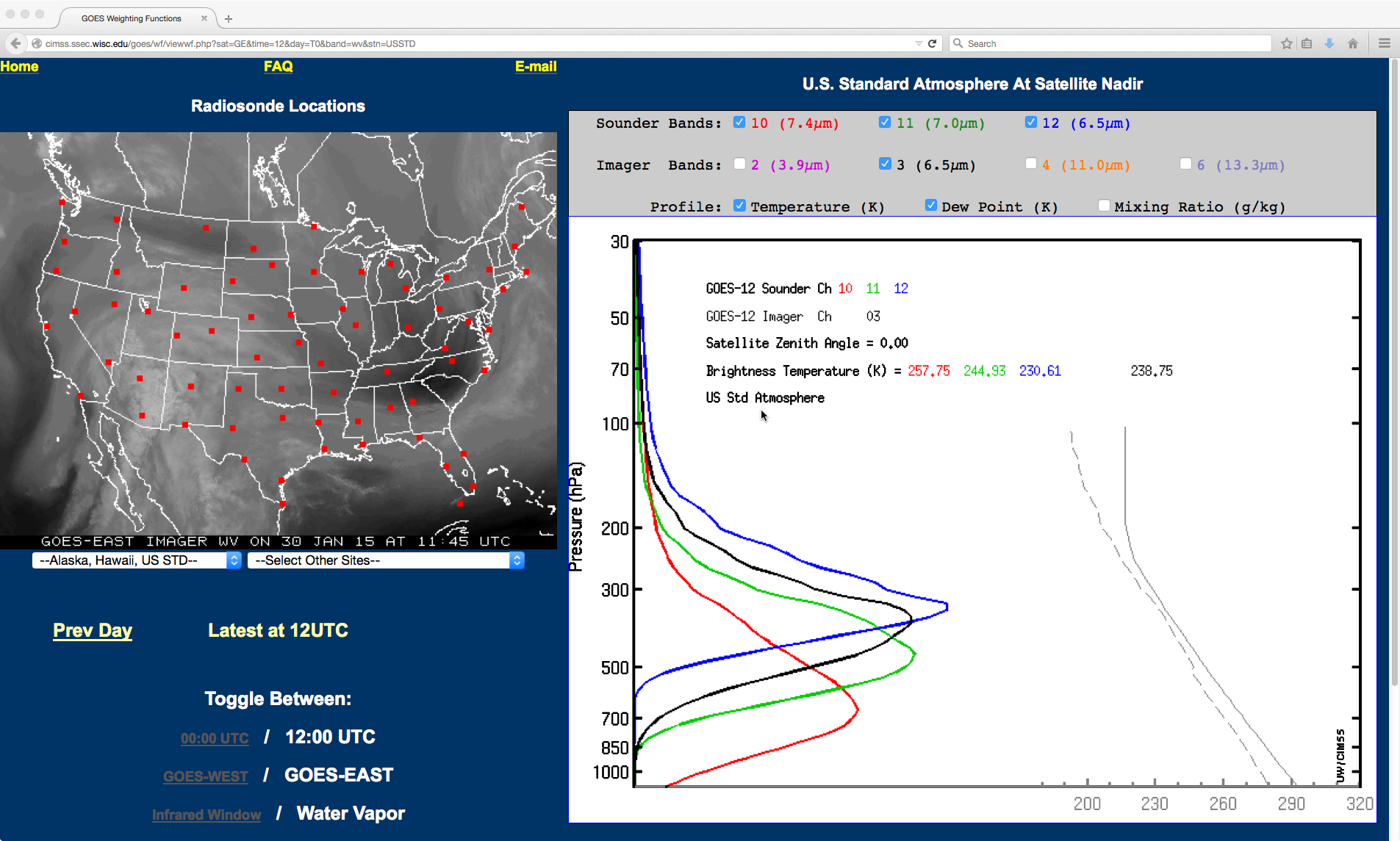