One of the largest severe weather outbreaks on record for the month of March occurred from the Ohio River Valley to the Gulf Coast states on 02 March 2012. This outbreak produced dozens of tornadoes, more than 400 hail reports (as large as 4.25 inches in diameter in Kentucky), and over 200 reports of severe damaging winds (SPC storm reports) — and was responsible for more than 30 fatalities. Focusing on one of the hardest-hit regions (from southern Indiana into Kentucky), a composite of the total cumulative SPC hail, severe damaging wind gust, and tornado reports are overlaid on an AWIPS image of 1-km resolution POES AVHRR 10.8 Âµm IR data (above).

4-km resolution GOES-13 10.7 Âµm IR images with overlays of corresponding SPC storm reports (below; click image to play animation) showed that during the 16:25 to 23:45 UTC period a number of cold overshooting cloud tops (IR brightness temperatures as cold as -70Âº C, darker black color enhancement, at 19:45 UTC), enhanced-V signatures, and cold-warm thermal couplets could be seen. For the large supercell thunderstorm that produced the tornado/tornadoes that did EF4 damage in Henryville in far southern Indiana after about 20:11 UTC, we can see that it exhibited fairly well-defined enhanced-V and/or cold/warm thermal couplet cloud top sinatures as it moved eastward across southern Indiana during the hour or two leading up to the tornadoes. Henryville is located approximately halfway between Seymour, Indiana (station identifier KSER) and Louisville, Kentucky (station identifier KSDF). 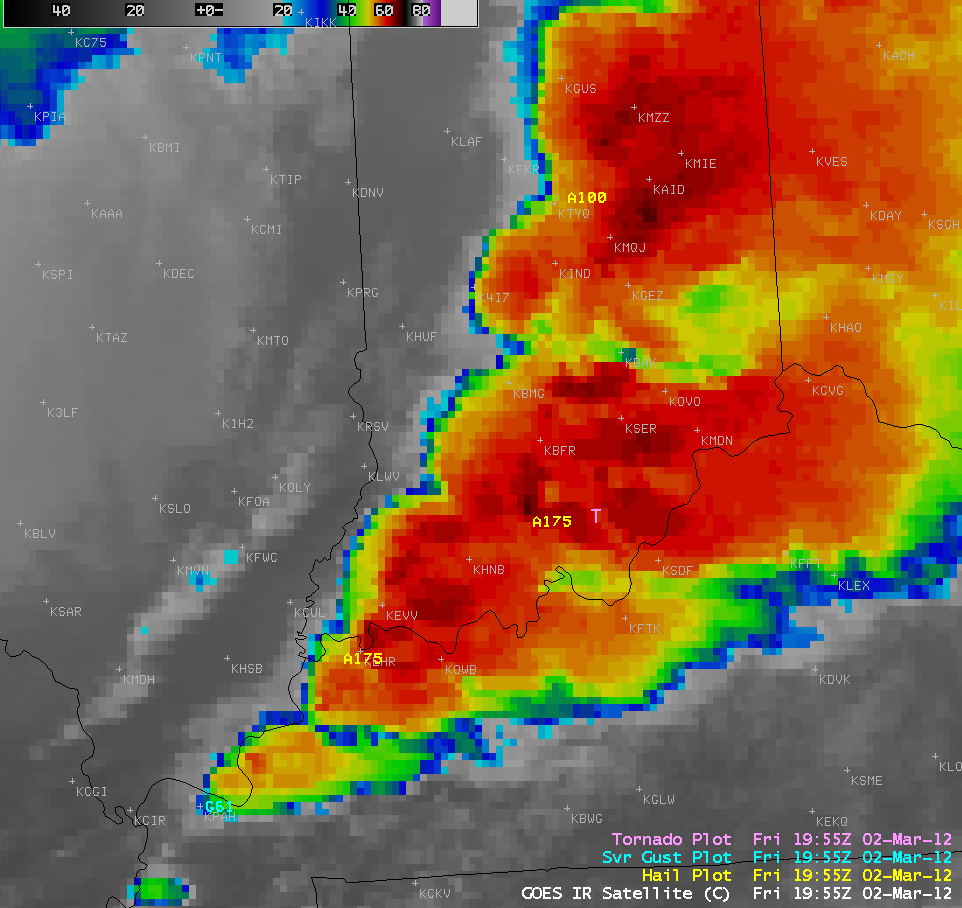 About an hour prior to the Henryville tornado, a comparison of 1-km resolution MODIS 0.65 Âµm visible channel and 11.0 Âµm IR channel images at 19:10 UTC (below) displayed a large thunderstorm over far southern Indiana, with overshooting top shadows seen on the visible image and an enhanced-V with a distinct cold/warm thermal couplet cloud top signature on the IR image.

In a comparison of the 19:10 UTC 1-km resolution MODIS 11.0 Âµm IR image with the correspondng 4-km resolution GOES-13 10.7 Âµm IR image (below), the advantage of improved spatial resolution is immediately obvious in terms of being able to identify storm-top severe storm signatures such as the enhanced-V or the cold/warm thermal couplet (Note: the spatial resolution of IR imagery on the next-generation ABI instrument on GOES-R will be 2 km). The coldest cloud-top IR brightness temperature on the MODIS image was -76Âº C, compared to -67Âº C on the GOES-13 image. Also evident is the northwestward “parallax shift” on the GOES-13 IR image, due to the large viewing angle from that particular geostationary satellite located over the Equator at 75Âº West longitude; a more accurate placement of the storm top features is seen using imagery from polar-orbiting satellites that fly more directly overhead.

A similar comparison between the 19:44 UTC 1-km resolution POES AVHRR 10.8 Âµm IR image with the corresponding 4-km resolution GOES-13 10.7 Âµm IR image (below) again demonstrated the easier identification of important storm-top signatures with improved spatial resolution data. These images were about 20-30 minutes before the Henryville and Marysville tornadoes in far southern Indiana.

Many of the supercell thunderstorms exhibited unusally fast forward motion speeds (as fast as 70-80 mph), due to the approach of a strong 140-knot core upper-level jet streak. A 1-km resolution MODIS 6.7 Âµm water vapor channel image with an overlay of NAM maximum wind speeds is shown below — strong divergence aloft within the left exit region of this upper-level jet streak helped to promote an environment supportive of strong vertical ascent.

From a larger synoptic-scale point of view, 10-km resolution GOES-13 sounder Lifted Index (LI) derived product imagery (below; click image to play animation) did begin to show a trend of destabilization early in the day within the warm sector of the mid-latitude cyclone, before extensive cloud cover prevented the subsequent retrieval of GOES sounder-based products. In terms of moisture, the Blended Total Precipitable Water product (above; click image to play animation) showed that TPW values in excess of 25 mm (or 1.0 inch) were being drawn northward within the warm sector of the cyclone. These TPW values were near or even in excess of 200 percent above normal for many areas for this early in the season (below; click image to play animation). A comparison of before (01 March 2012) and after (10 March 2012) 250-meter resolution MODIS true-color Red/Green/Blue (RGB) images from the SSEC MODIS Today site (above) revealed the southwest-to-northeast oriented tornado damage path from the Henryville, Indiana EF4 tornado.