The Problem of Parallax

Parallax can mean different things in different sciences (See, for example, this link that describes how parallax is used to compute distances in astronomy), but in satellite meteorology, parallax is the apparent shift in an object’s position (away from the sub-satellite point) as a result of viewing angle. (Here is an example.) Parallax generally increases as you move away from the sub-satellite point. It is also large for higher clouds. Consider the simplified example below.

It shows a lake (blue surface) viewed obliquely from a distant satellite. So this surface feature is far from the sub-satellite point. If a very tall cloud develops between the surface lake and the observing satellite, the satellite will still interpret the information as coming from the surface — that is, where the lake is. In reality, however, the tall cloud is displaced towards the sub-satellite point. Note also another consequence of the viewing angle: the temperature of the cloud will reflect the temperature of the side of the cloud that the satellite is viewing. The colder cloud top will be in a different pixel.

Parallax in geostationary imagery becomes obvious when cloud imagery is compared with surface-based observations. The example below is from April 2006, and shows strong convection over northern Wisconsin just south of Lake Superior. More modest convection is over southern Wisconsin near Madison. The enhanced infrared imagery can be used to infer the height of the cloud (cold clouds are usually higher in the atmosphere). Displacement (parallax) is greater for higher clouds. The coldest clouds are associated with the convection just south of Lake Superior. The radar for the same time shows a line of convection displaced to the south of the convection. The displacement is difficult to see in the three individual images, but stands out in the fader that can be seen here (Link requires Java).

(Added, 2013: The examples below show how the satellite navigation can place severe weather events in a location that is not where you might expect it to be. By parallax-correcting the observation, the severe weather report location is more properly aligned with the cloud top as seen in satellite images. The images below provide GOES-13, GOES-14 and GOES-15 views of a large hail event in northwest Wisconsin; imagery courtesy of Bob Rabin and Jim Nelson, CIMSS)

It is also possible to remap the satellite image, rather than the storm report. The GOES-14 satellite image below was first remapped to a Mercator projection, and that image was then parallax corrected (using infrared imagery to estimate the height of the cloud; note that low clouds show very little parallax correction).

Added, 2017: The National Weather Service Operational Proving Ground produced a YouTube video, below, discussing the causes and effects of parallax. 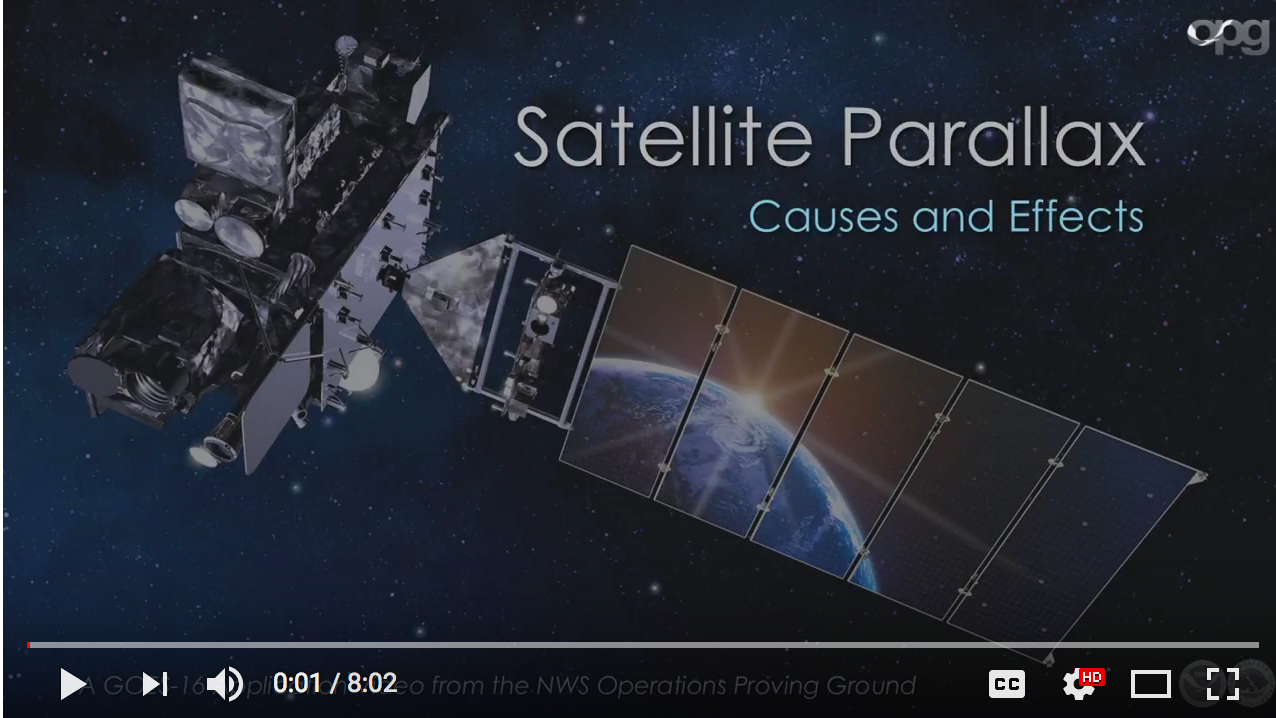