Snowfall amounts as high as 10-15 inches fell across parts of west Texas and southeast New Mexico on 09 January 2012 as a strong upper level disturbance moved across that region (NWS Lubbock TX storm summary). On the following morning, a comparison of GOES-15 (GOES-West) and GOES-13 (GOES-East) 0.63 Âµm visible channel images (above; click image to play animation) showed the areal coverage of the snow cover that remained on the ground. Note how the patch of snow began to melt from the outer edges inward as the full day of sunshine warmed the ground surface. Also note the curious “donut hole” of bare ground on the northern end of the main snow cover — this feature rapidly disappeared, as the snow depth associated with this feature was not very high.

A comparison of 250-meter resolution MODIS true color and false color Red/Green/Blue (RGB) images from the SSEC MODIS Today site (below) showed greater detail in the snow cover (snow on the ground appears as darker shades of cyan on the false color image) at 18:02 UTC.

A comparison of AWIPS images of MODIS 0.65 Âµm visible channel data and the corresponding false color RGB image (below) offered another tool that can be used to discriminate between snow cover (which in this example appears as darker shades of red on the false color image) and supercooled water droplet clouds (which appeared as varying shades of white).

A comparison of the MODIS 0.65 Âµm visible image with the corresponding MODIS Land Surface Temperature (LST) product (below) revealed how the deep snow cover was helping to keep surface air temperatures significantly colder than adjacent regions with bare ground. MODIS LST values were in the low to middle 30s F across the deeper snow cover, in the upper 40s to low 50s F in the “donut hole” region where the snow had just melted, and in the 60s F to the north over bare ground. Also note how the urban areas of Midland and Odessa stand out in the LST image, with LST values in the low to middle 40s F.

The mechanism for the creation of the “donut hole” snow cover feature is unclear at this point. A comparison the MODIS Land Surface Temperature product with the regional topography (below) seems to suggest that this feature was not topographically-driven.

The MODIS true color image viewed using Google Earth (below) showed that the community of Brownfield (which did received about an inch of snowfall the previous day) was aptly named, being located within the brown-colored snow-free region at 18:02 UTC. 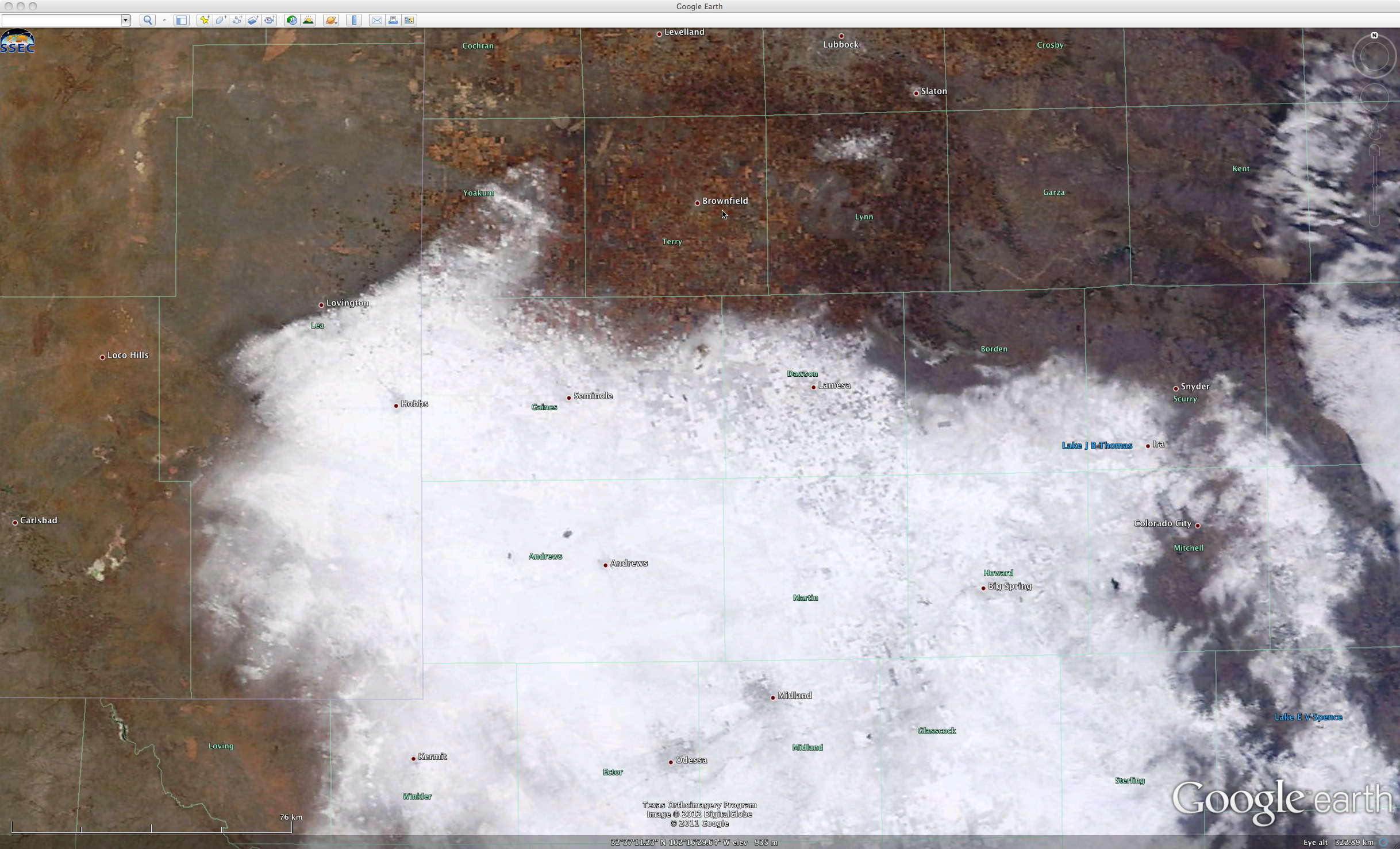