Swaths of snow (and ice) across parts of Missouri, Illinois, Indiana, and Kentucky

McIDAS images of GOES-13 0.63 Âµm visible channel data (above) showed the presence of long, narrow swaths of brighter white snow cover oriented from southwest to northeast across parts of Missouri and Illinois (as well as a broader swath of more significant snow cover across Kentucky) on the morning of 26 November 2010. Reports of snowfall within the narrow swaths — which occurred on the previous day — across Missouri and Illinois were generally 1 inch or less, with the highest amount being 2.0 inches at Seymour, Missouri (NOHRSC snowfall totals). The light snow cover was seen to melt rather quickly during the morning hours under full sunshine.

However, in addition to the light snowfall, a number of locations also reported freezing rain, with ice accumulations of about 1/8 inch. A comparison of AWIPS images of 1-km resolution MODIS 0.65 Âµm visible channel data with a MODIS false-color Red/Green/Blue (RGB) image (below, created using MODIS 0.65 Âµm data as the Red compoent and MODIS 2.1 Âµm “snow/ice channel” data as the Green and Blue components) helped to highlight the areas where there was also some light ice accrual (which, being generally transparent, would not show up on the visible channel image).

An image of the MODIS Land Surface Temperature (LST) product (below) showed that the swath of snow cover across southern Missouri was keeping LST values down into the 30s F (darker blue color enhancement), compared to LST values in the 40s in the bare ground areas adjacent to the snow cover. 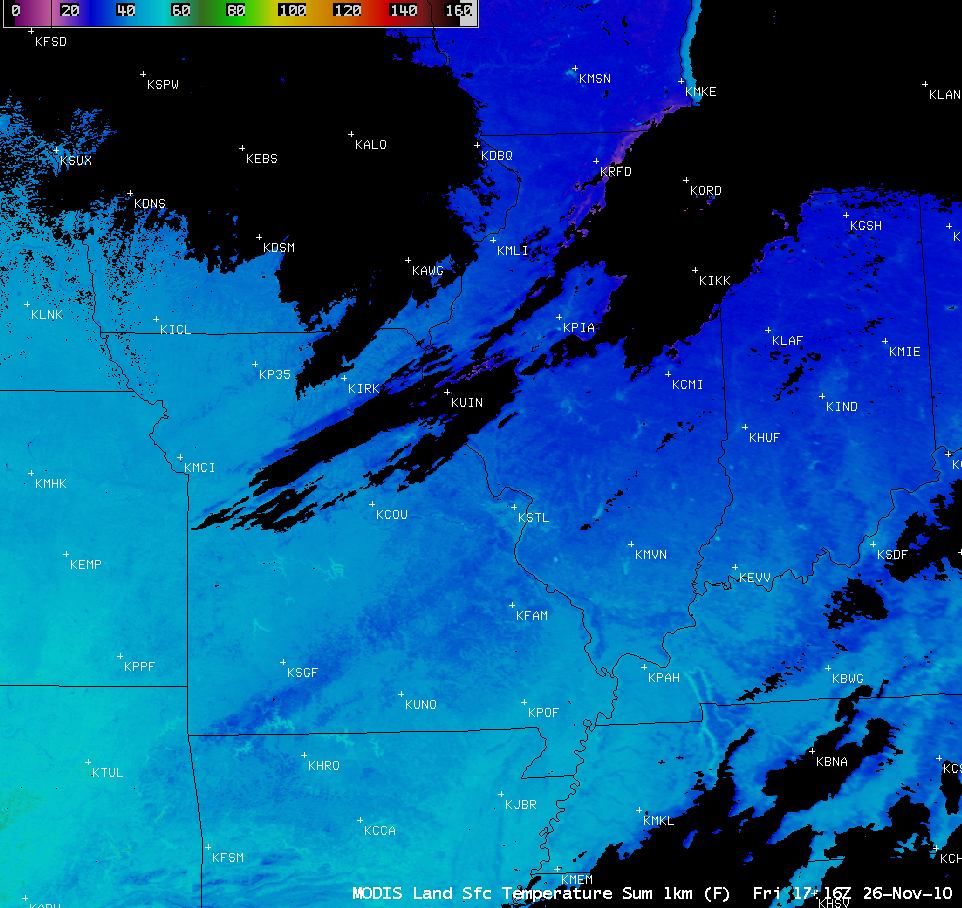