Reflection of sunlight from the Topaz Solar Farm in southern California 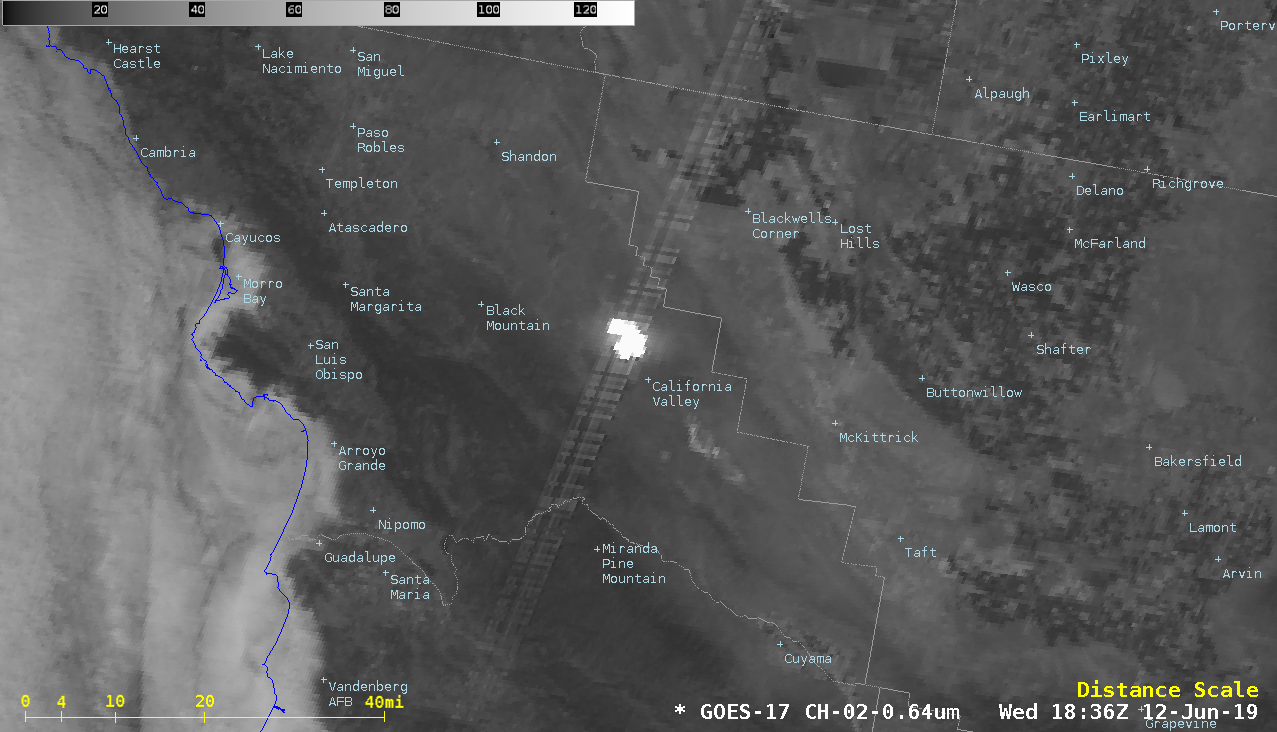 1-minute Mesoscale Domain Sector GOES-17 (GOES-West) “Red” Visible (0.64 µm) images (above) revealed a bright reflection of sunlight off the large arrays of solar panels at Topaz Solar Farm in southern California (Google maps) — located between Black Mountain and California Valley — on 12 June 2019. Of particular interest are the vertical “stripes” emanating from the bright reflection signature in the 0.64 µm images, extending both northward and southward from the solar farm. These image artifacts are likely related to saturated ABI detector column amplifiers, due to an excess charge induced by intense sunlight reflection off the large solar panels.

Visible images displayed using McIDAS (below) are in the native GOES-17 satellite projection — removing the re-mapping inherent in the AWIPS images shown above — so the vertical striping artifacts are correctly oriented with respect to how the ABI swaths are scanned.

In multi-panel GOES-17 images that showed all 16 ABI bands (below) this reflection signature was apparent in the other visible and in most of the other infrared channels. The reflected energy was so intense that the Shortwave Infrared (3.9 µm) images displayed infrared brightness temperatures of 138.7ºC (411.85 K), the saturation temperature of the 3.9 µm detectors. Another interesting artifact: the so-called “Dark Pixels Around Bright Objects” that appear in the Visible (0.47 µm and 0.64 µm) and Near-Infrared (0.86 µm, 1.61 µm and 2.24 µm) spectral bands. 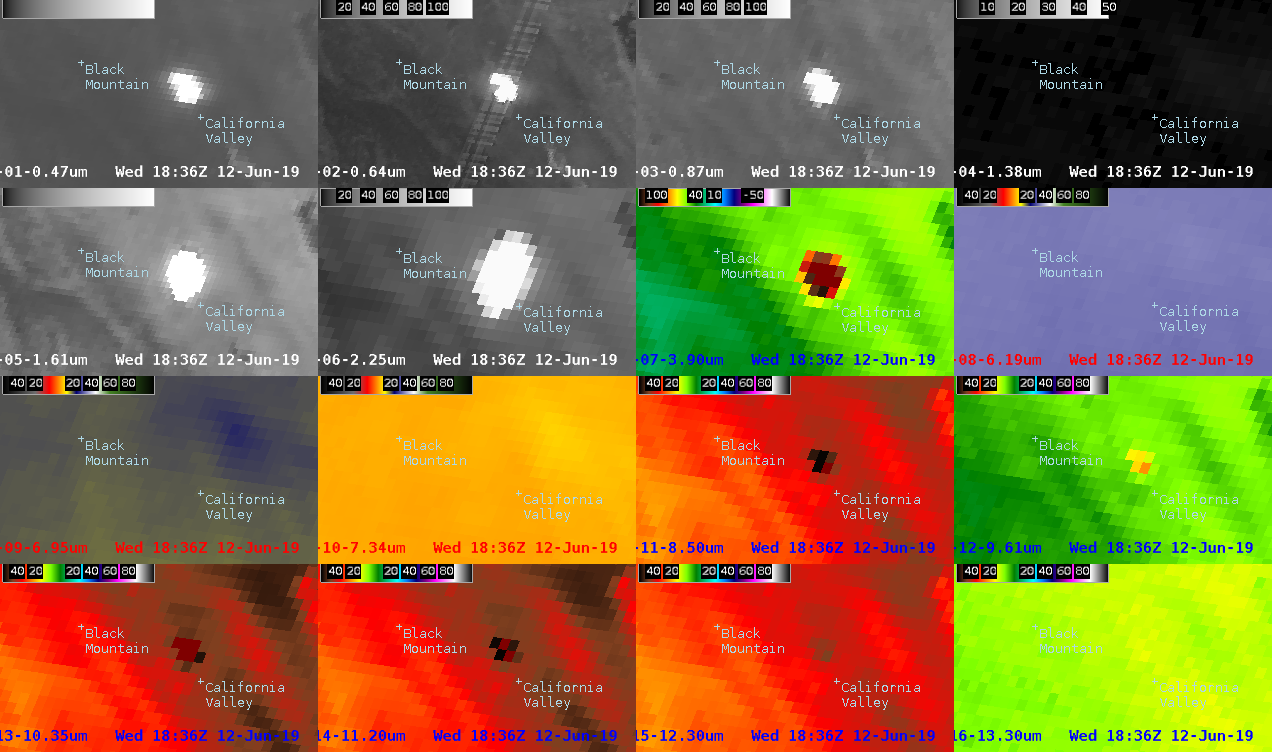 However, note the absence of a solar farm signature in the Cirrus (1.37 µm), Water Vapor (7.3 µm, 6.9 µm and 6.2 µm) and CO2 (13.3 µm) images — the presence of a layer of moisture within the mid-troposphere (centered near the 500 hPa pressure level) absorbed upwelling radiation from the surface, then re-emitted radiation at the colder temperature of that moisture aloft (thereby masking the bright/hot solar farm signature). Plots of Infrared and Water Vapor weighting functions (below) showed significant peaks at higher altitudes (due to the aforementioned layer of mid-tropospheric moisture) for Bands 8, 9, 10 and 16 — while the other Infrared spectral bands had their strongest weighting function peaks at the surface, with minimal contributions from higher altitudes.

It is interesting to examine GOES-17 imagery from 5 days earlier (below) — due to a drier air mass over the area on 07 June (with a Total Precpitable Water value of 0.57 inch, vs 0.70 inch on 12 June), a faint signature of the solar farm reflection could even be seen in the Band 4 Cirrus (1.37 µm) imagery. 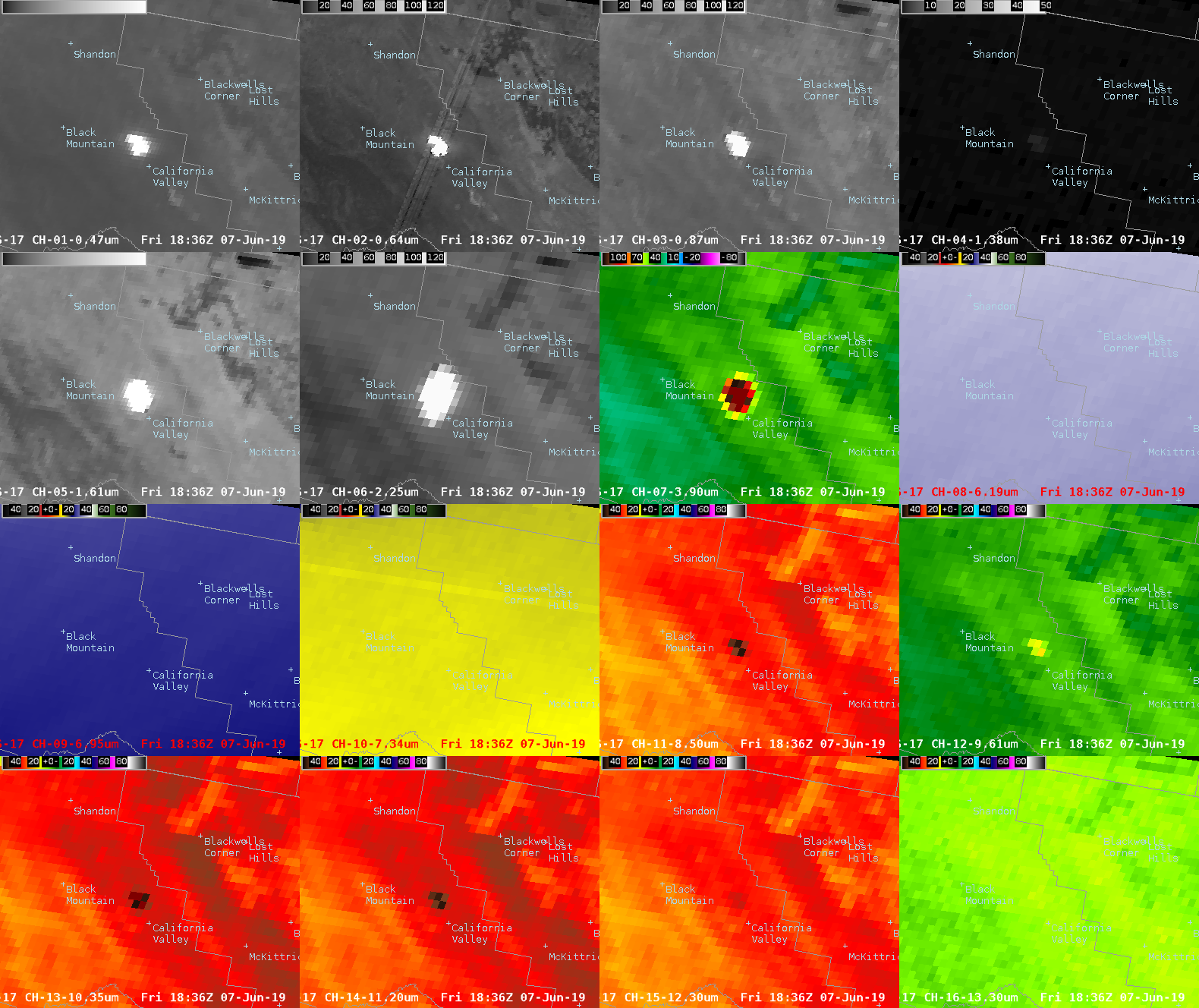 Plots of the Infrared and Water Vapor weighting functions for that earlier day (below) showed higher-altitude peaks for bands 8, 9, 10 and 16 (similar to what was seen in the 12 June case).