Cold weather outbreak across the Upper Midwest and Great Lakes 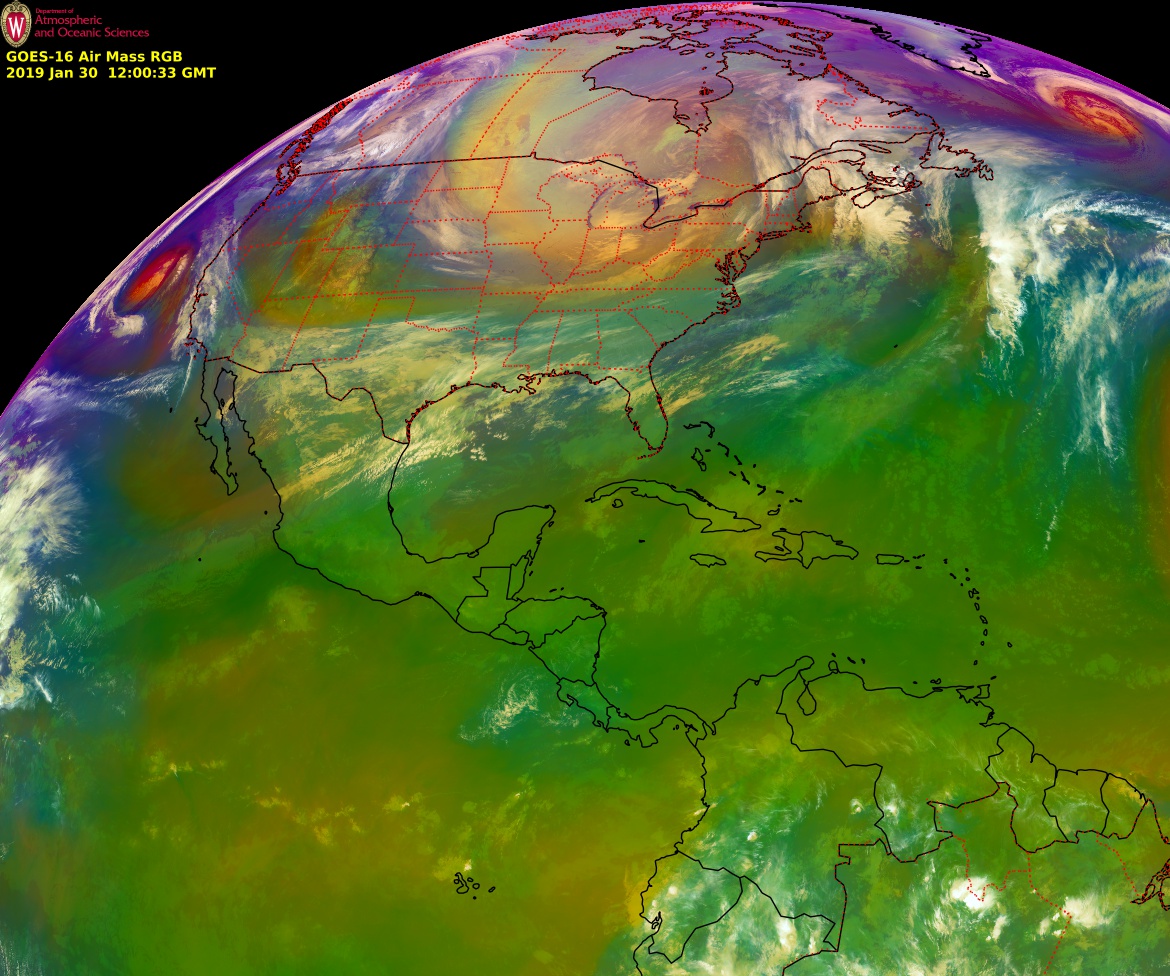 A highly-amplified upper air and jet stream pattern allowed a lobe of the polar vortex to migrate southward across southern Canada and the north-central US — leading to an outbreak of arctic air throughout the Upper Midwest and Great Lakes during the 29 January – 30 January 2019 period. The path and expansion of the cold arctic air was apparent in GOES-16 (GOES-East) Air Mass RGB images from the AOS site (above) — which first became evident over the Canadian arctic beginning on 28 January. The coldest air exhibited pale shades of yellow to beige in the Air Mass RGB images.

“It Came from Nunavut”
It sounds like the title of a good movie to describe this cold weather. Have you been wondering where this system came from? The upper-level low pressure system dived down from northwest Nunavut, in far northern Canada, to Minnesota. pic.twitter.com/GZSMCcO1eR

GOES-16 “Clean” Infrared Window (10.3 µm) images (below) also showed the southward expansion of arctic air into the north-central US — surface infrared brightness temperatures of -30 to -40ºC (darker blue to green enhancement) covered a large area. Such cold infrared brightness temperatures are normally associated with clouds in the middle to upper troposphere. Surface air temperatures of -20 to -40ºF were widespread, along with wind chill values of -40 to -70ºF, leading to numerous school and business closures. Two of the coldest official temperatures in the US on the morning of 30 January were -48ºF at Norris Camp, Minnesota and -44ºF at Bottineau, North Dakota (the high temperature in Bottineau on the previous day, 29 January, was only -26ºF); however, there were a few North Dakota Department of Transportation roadside sensors that reported low temperatures of -49ºF.

More than 130 hourly observation stations across the Upper Midwest recorded a wind chill of -50°F or colder overnight into this morning. Here are some select station minimums from across the region. pic.twitter.com/A7FXAKdP8y

GOES-16 True Color RGB images (below) revealed a variety of multiple-band and single-band lake effect snow features as the arctic air moved across the Great Lakes. In addition, elongated and long-lived cloud bands created snow squall conditions across parts of Ohio and Pennsylvania. 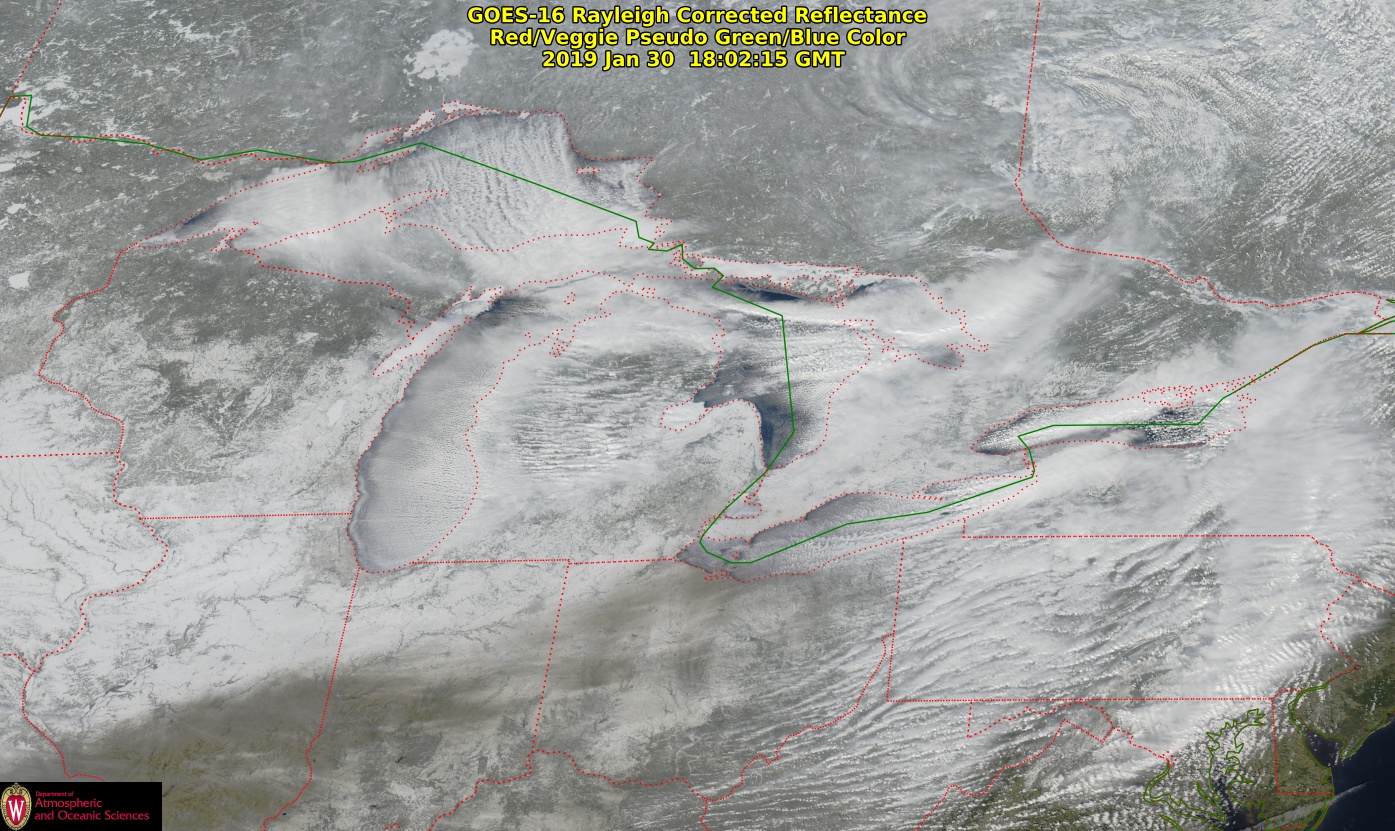 VIIRS True Color RGB and Infrared Window (11.45 µm) images from NOAA-20 (at 1802 UTC) and Suomi NPP (at 1852 UTC) viewed using RealEarth (below) provided a closer look at the cloud bands across Ohio and Pennsylvania. 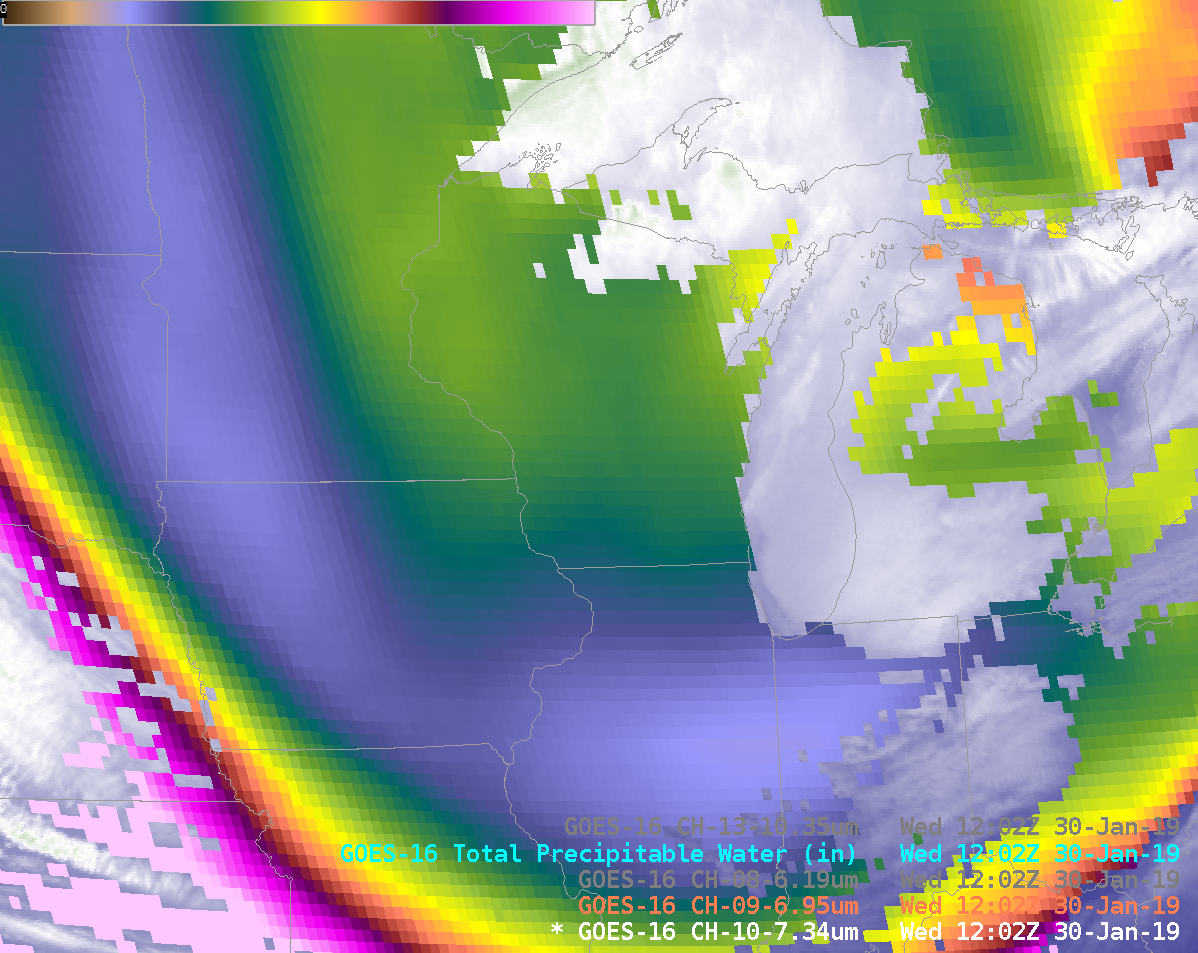 In addition to being extremely cold, the airmass over the Upper Midwest was extremely dry. The image above shows the Baseline GOES-R Total Precipitable Water product. The default AWIPS color enhancement has been modified to better capture the extreme dryness. Regions in light blue over western Minnesota and the eastern Dakotas curving through Iowa into northern Illinois show TPW values around 0.01″ ; green shadings over Wisconsin and eastern Minnesota correspond to values closer to 0.03″. In such dry airmasses, it is possible to see surface features in the infrared 7.3 low-level ABI Water Vapor Channel, Band 10, and the morning of 30 January was no exception, below. Surface features like rivers are notable in Illinois, for example. Even the heat island of the Minneapolis/St. Paul is apparent (albeit barely).  Surface features over northern Minnesota and Wisconsin aren’t quite so apparent, perhaps because of the increased amounts of moisture there.  There is likely less surface temperature contrast there, also, as rivers/lakes are more likely frozen.  It is the temperature contrast — as best exemplified by the Great Lakes shorelines — that allows features to appear in the Water Vapor imagery. 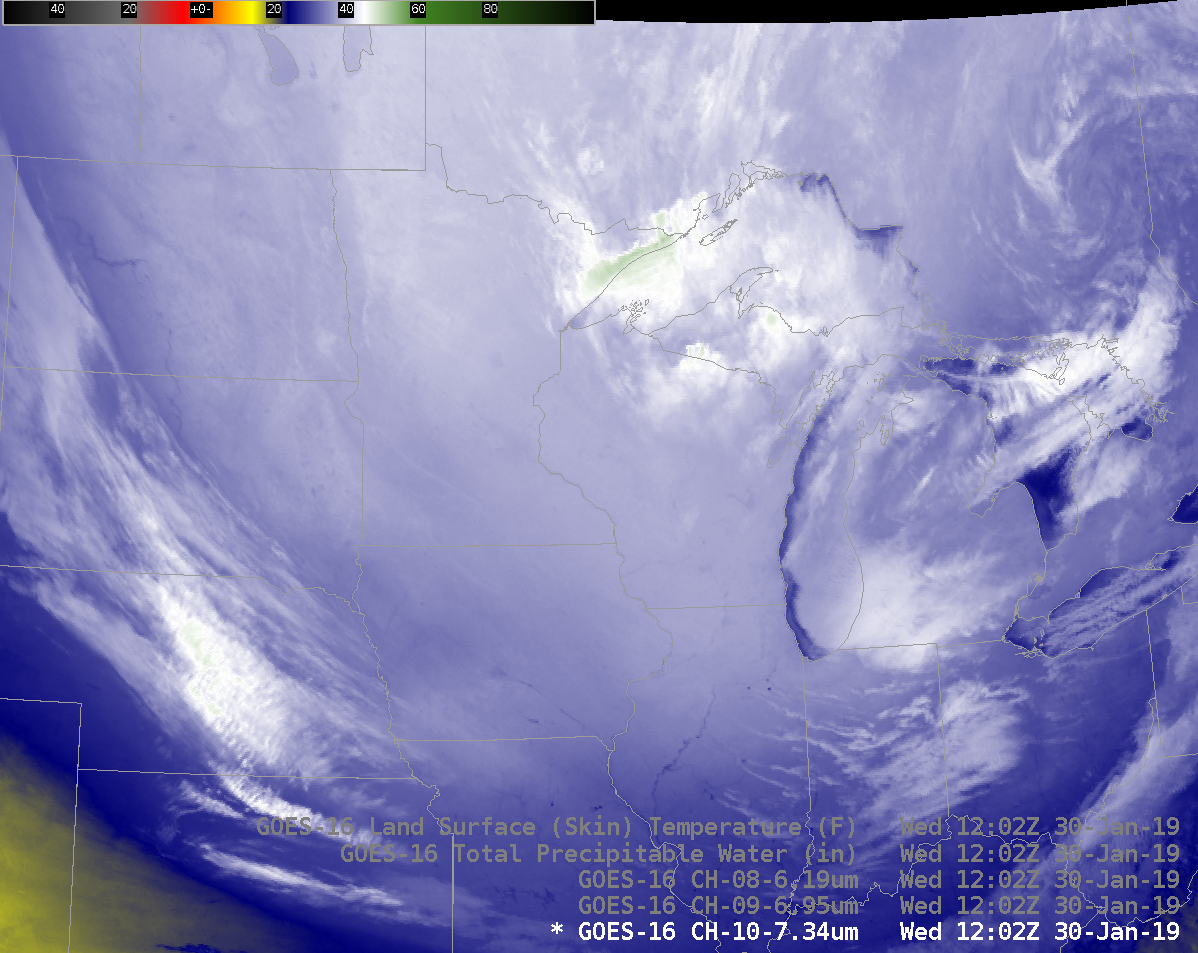 Weighting Functions (in real time, from this site) allow for an estimate of where information in different water vapor channels will be detected by the satellite. In the 0000 UTC 30 January 2019 example, below, from Chanhassen, MN (when total precipitable water there was 0.01″), a large signal is apparent from the low-level water vapor channel (7.3 µm); in fact, most of the information detected by the satellite was coming from the surface!  Even the mid-level water vapor (6.9 µm) had a component from the surface.  Weighting Functions for Davenport Iowa (The axis of the driest air shifted from near Chanhassen at 0000 UTC to near Davenport at 1200 UTC) at 0000 UTC and 1200 UTC are shown here; Note in the toggle that the level from which information is received by the satellite drops from 0000 to 1200 UTC as dry air moves in. 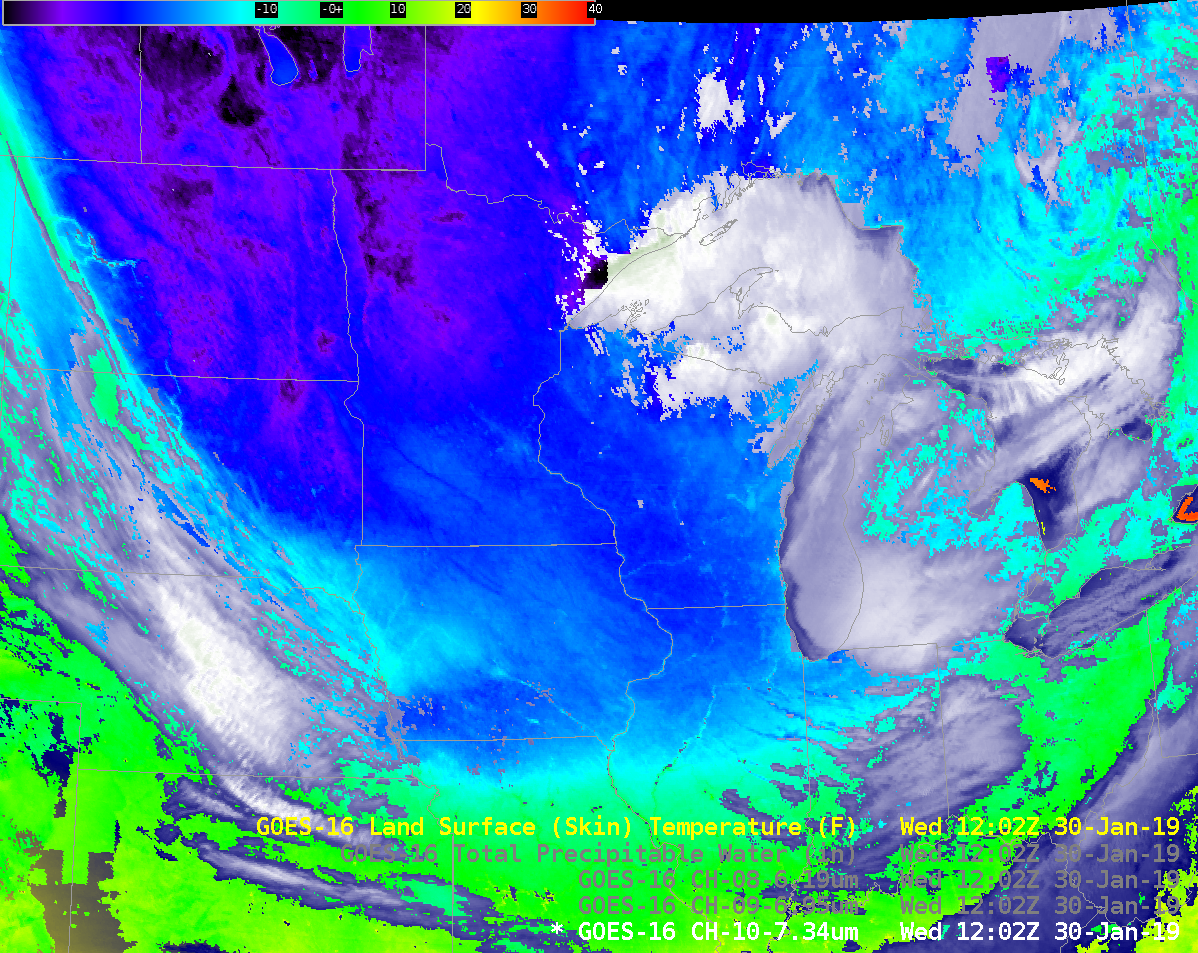 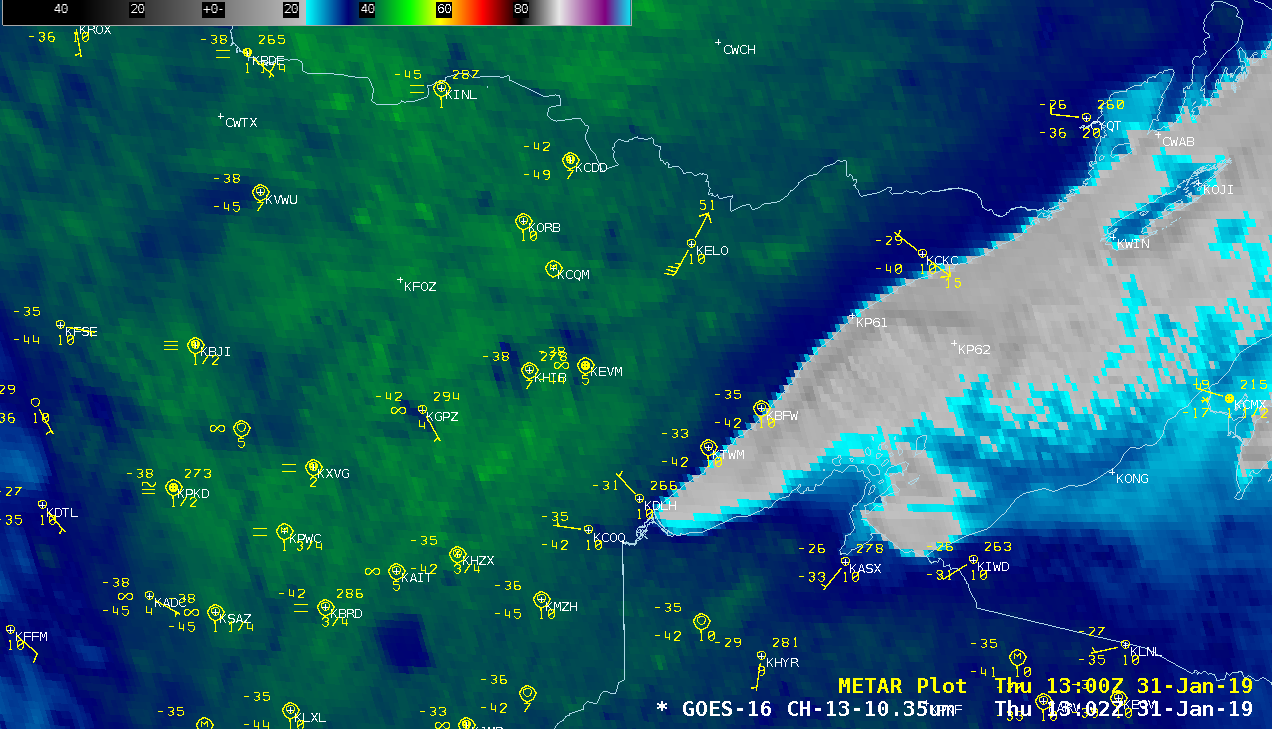 Across much of the Upper Midwest, the coldest temperatures occurred on the morning of 31 January. GOES-16 Infrared images (above) showed much of northeastern Minnesota and far northwestern Wisconsin — the low temperature of -56ºF at Cotton was only 4 degrees warmer than the all-time record low for Minnesota, and the low temperature of -47ºF at Butternut was 8 degrees warmer than the all-time record  low for Wisconsin (both of those state records were set in early February 1996). The -56ºF in Cotton was not only the coldest temperature in the Lower 48 states on 31 January, but was also significantly colder than any official reporting station in Alaska that day. Also of interest in northeastern Minnesota, note the warmer plumes (darker blue enhancement; brighter greens are coldest) coming from power plants and industrial sites in the Iron Range area.

Farther to the south, GOES-16 Infrared images covering the Minnesota/Wisconsin/Iowa/Illinois region (below) also showed widespread cold surface brightness temperatures (shades of green). All-time record low temperatures were set at Cedar Rapids in Iowa (-30ºF) and at Moline (-33ºF) and Rockford (-31ºF) in Illinois. The cooperative observer at Mt. Carroll in northwestern Illinois reported a low of -38ºF — this was certified as a new all-time record minimum temperature for the state of Illinois. 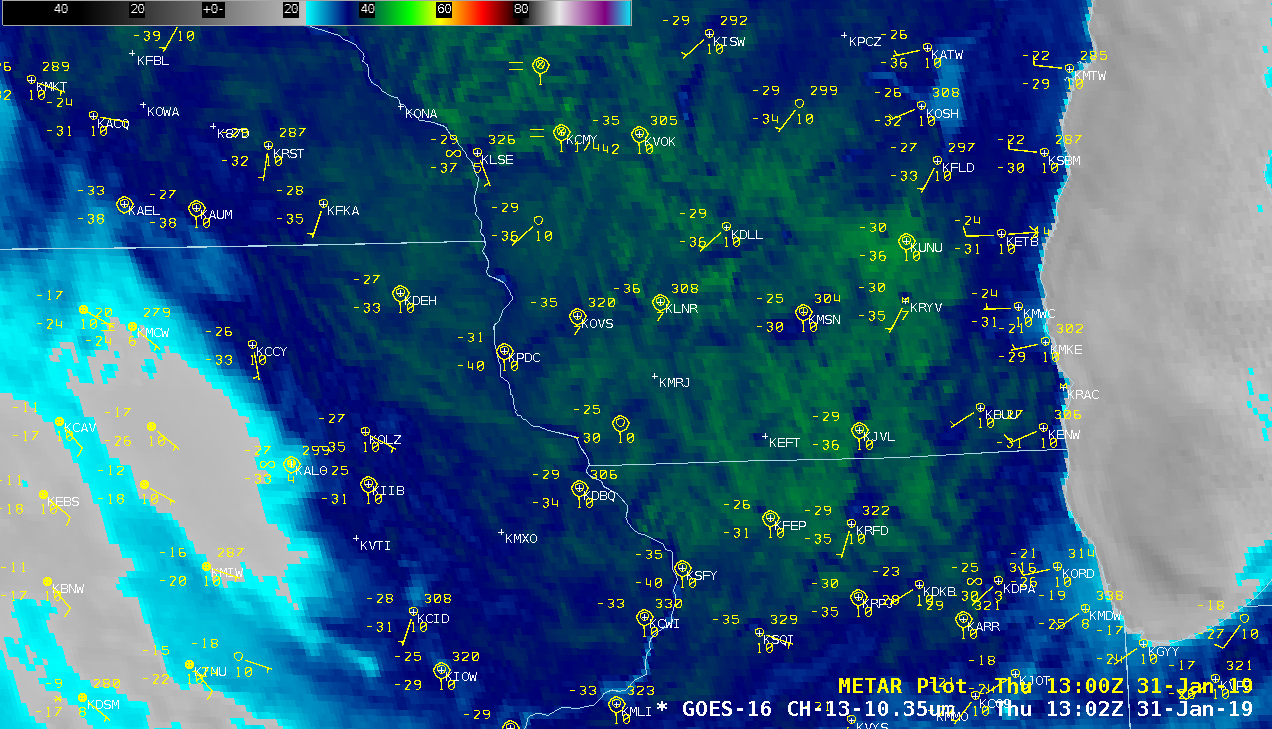 The recent stretch of days with cold air in place had helped the ice coverage to increase significantly in western Lake Superior — and the transition from northerly/northwesterly cold air advection to southwesterly warm air advection at the surface began to fracture a lot of this newly-formed lake ice (below). 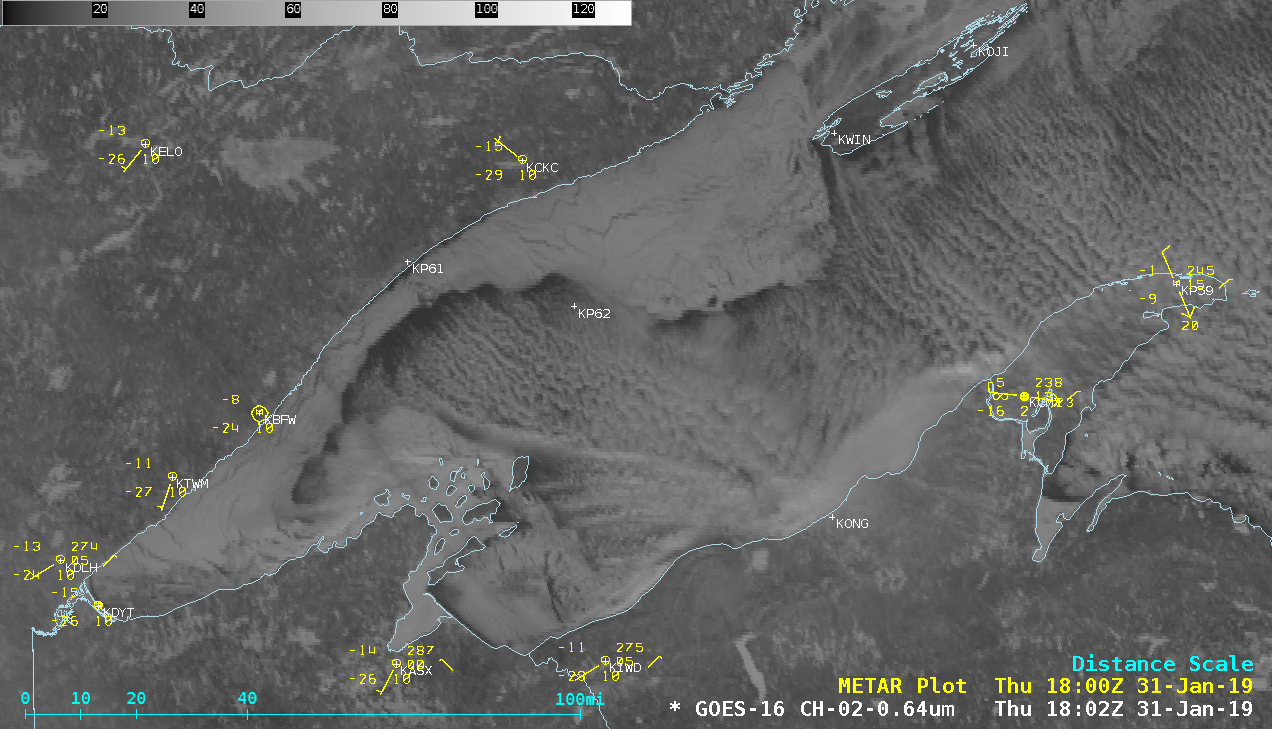 Ice coverage had also increased across much of western/central Lake Erie, although areas of open water continued to supply latent heat to help generate lake effect snow bands (below). 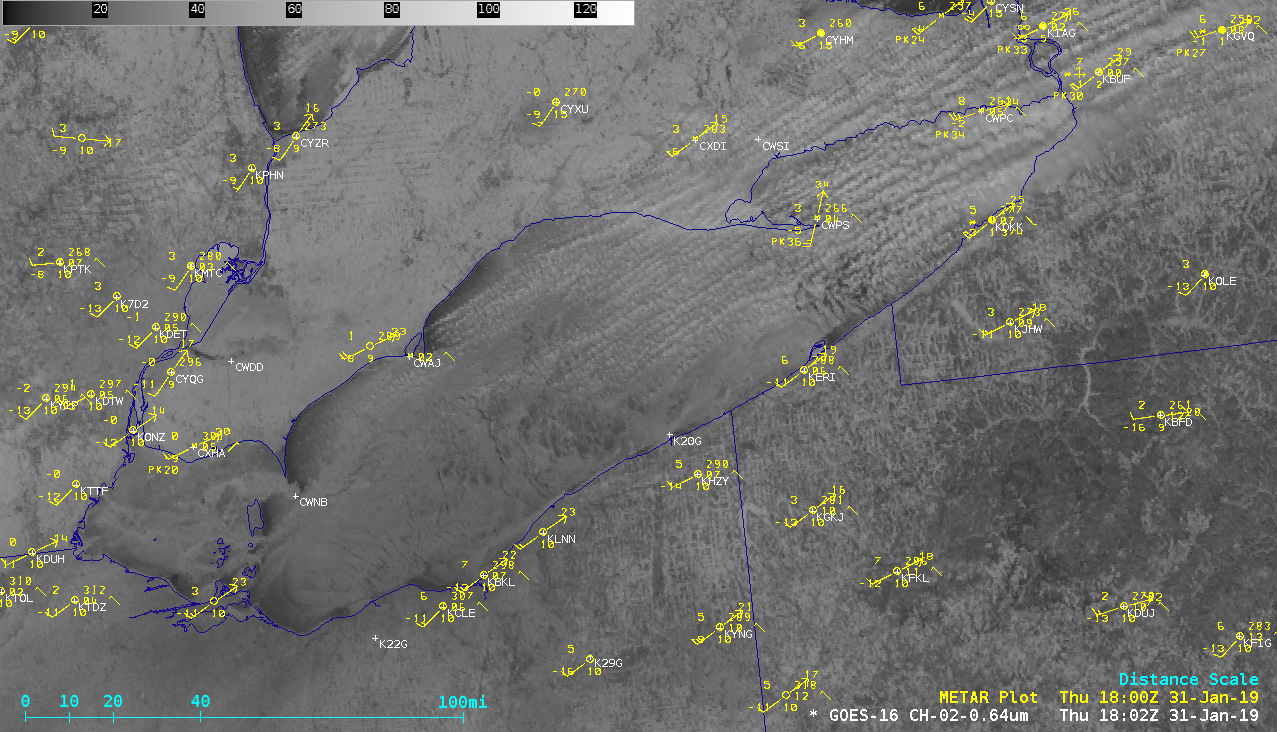 A sequence of Terra MODIS True Color RGB images (below) showed substantial growth of nearshore ice in the southern end of Lake Michigan from 29 to 31 January.