Overlays of conventional lightning data (below) showed that there were 1493 negative and 180 positive cloud-to-ground strikes detected within a 15-minute period across that region.

One subtle feature seen on the VIIRS Day/Night Band image was the presence of concentric waves propagating northward through eastward away from the core of the convective complex (below). These features were “mesospheric airglow waves” — essentially “night glow” emitted from a variety of high-altitude (80-105 km) gases (primarily the sodium layer) near the mesopause — that were forced by the intense convective complex in the troposphere. Note that these mesospheric airglow waves do not show up on the corresponding VIIRS Infrared Window image. 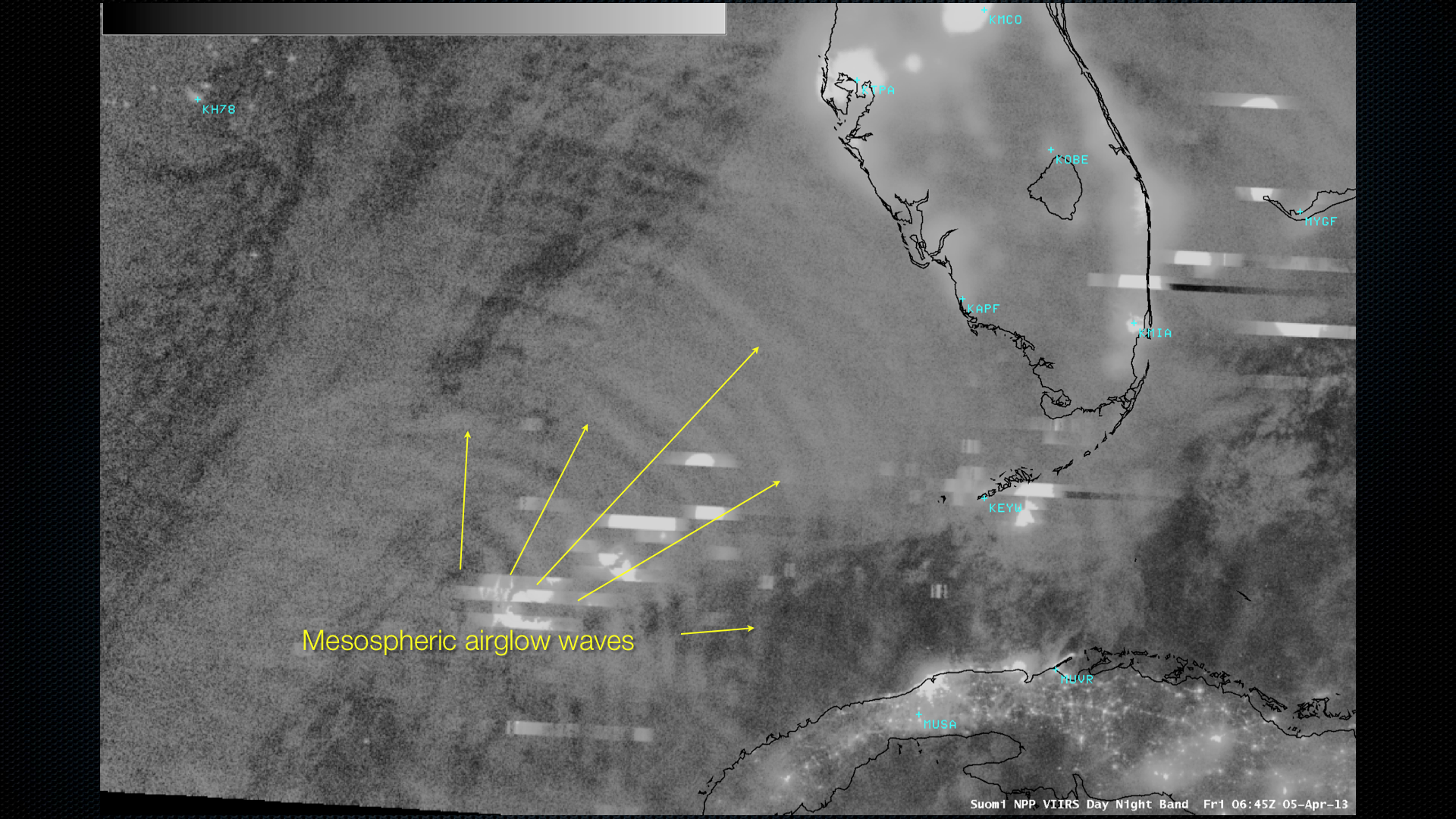 The signature of mesospheric airglow waves was also seen on the previous night (below), again forced by intense convection in the Gulf of Mexico.

Thanks to Steve Miller (CIRA) for offering an explanation of these wave features, and providing the reference “Suomi satellite brings to light a unique frontier of nighttime environmental sensing capabilities”

A few days later, yet another example of mesospheric airglow waves was seen in Day/Night Band imagery — but in this case, the waves were forced not by deep tropospheric convection, but by the interaction of strong winds with the rugged topography of the Southwest US. The flow throughout the depth of the troposphere was quite strong as a 120-knot jet upper-tropospheric jet streak was moving southward along the west side of a trough that was deepening over the western US on 08 April 2013. A series of mesospheric airglow waves could be seen traveling southeastward across the Gulf of California and adjacent portions of Baja California and Mexico at 09:10 UTC or 2:10 AM local time (below). Again, note that there was no wave signature apparent on the corresponding VIIRS Infrared Window image.

During the subsequent daytime hours, GOES-15 (GOES-West) and GOES-13 (GOES-East) Water Vapor (6.5 µm) images (below) revealed a complex pattern of mountain waves across the region — surface wind gusts were as high as 88 mph in California, 70 mph in Nevada, and 63 mph in Arizona.