Mesoscale Convective System in the Gulf of Mexico 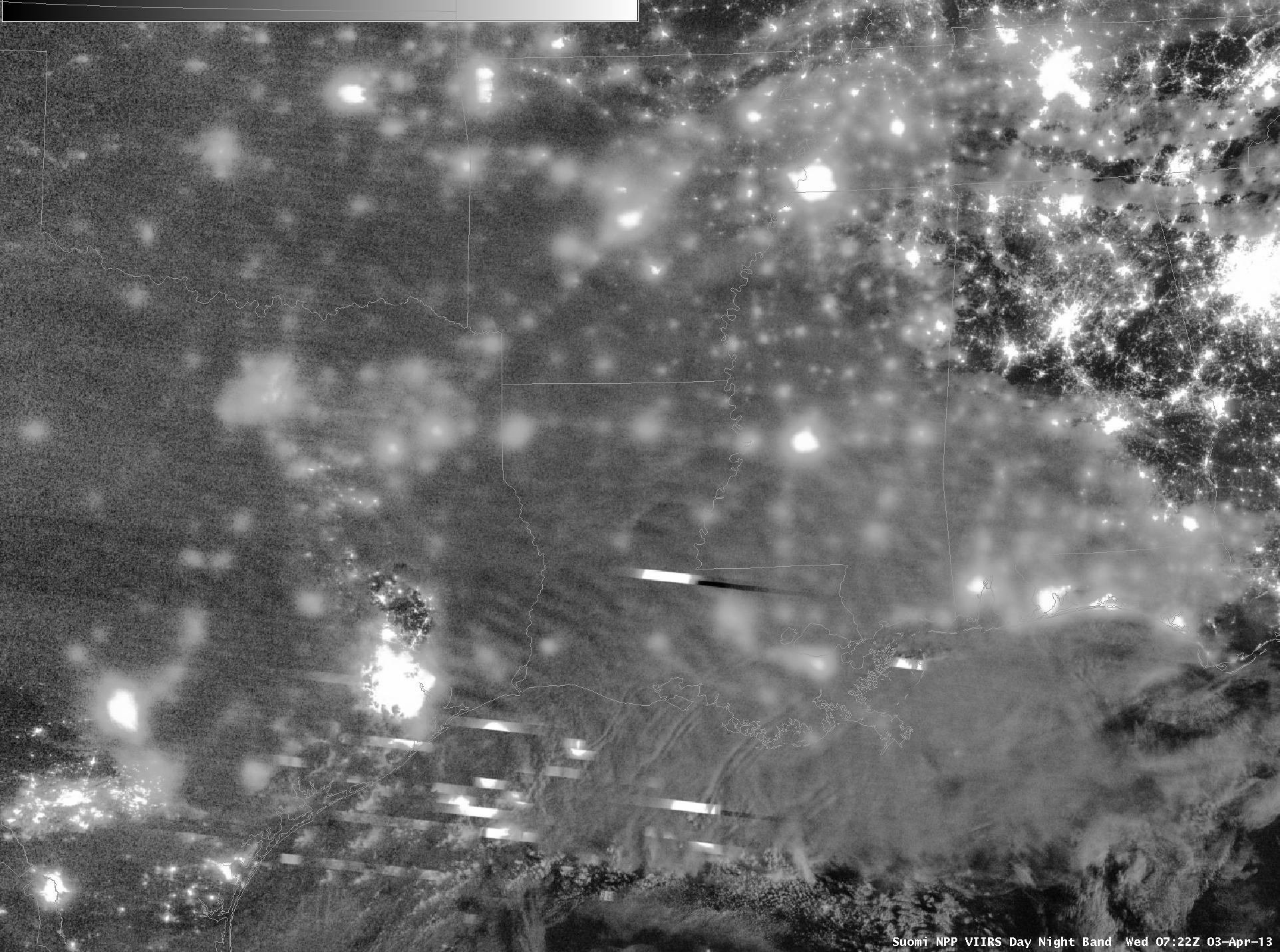 One of the first strong Mesoscale Convective Systems of the Spring Season traversed the Gulf of Mexico during the day on April 3rd. Suomi/NPP VIIRS imagery of the 0.7 Âµm Day/Night Band and the 11.45 Âµm IR channel, from 0722 UTC, above, showed elements that are characteristic of these convective features. For example, the thick convective clouds were able to obscure most of the city lights of southern Louisiana on the Day/Night Band image, and the 11.45 Âµm IR imagery showed very cold cloud tops — colder than -80 C — over the Gulf of Mexico, along with evidence of cloud-top gravity waves over southern Louisiana (and the adjacent coastal waters) as well as over east Texas.

The active convection was generating considerable lightning activity: there were 1275 negative and 186 positive cloud-to-ground (CG) strikes detected over the region within a 15-minute period. Cloud tops illuminated by lightning were depicted as bright smears of light in the Day/Night Band (DNB) image, indicative of the very fast VIIRS sensor scanning motion. Of particular interest was a pair long black streaks immediately downstream of two large areas of lightning-illuminated cloud tops: one over Louisiana, and another farther south over the Gulf of Mexico (magnified image). These black lines represented a post-saturation “recovery period” after the DNB sensor detected very bright areas associated with intense lightning activity. It is also important to note that there is not always a direct correspondence between DNB image cloud-top lightning signatures and clusters of CG lightning activity — only one positive GC strike was seen close to the bright Louisiana DNB image lightning streak, while numerous negative and positive CG strikes were in the vicinity of the Gulf of Mexico DNB lightning streak. 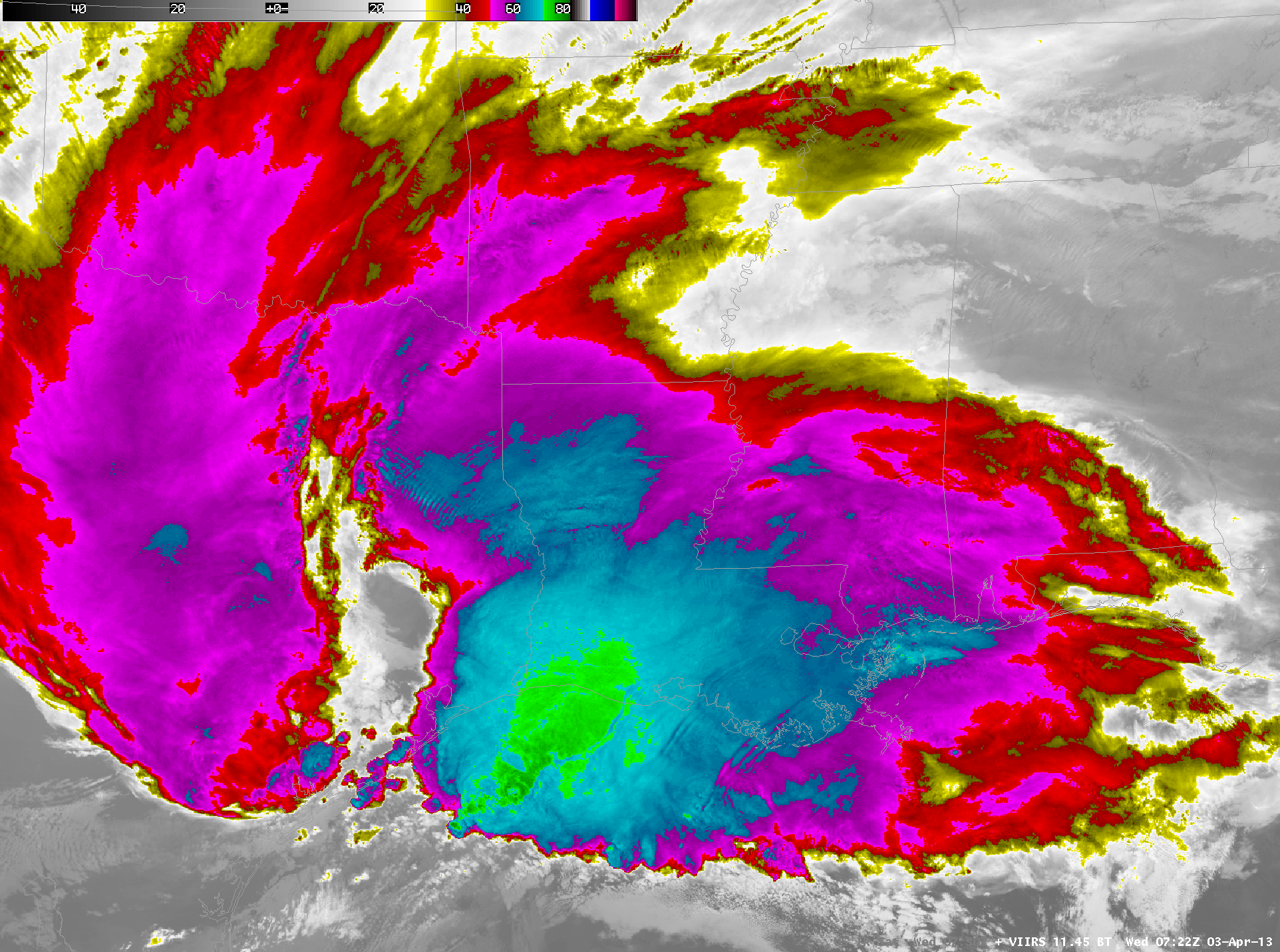 A toggle between the high-resolution (1 km) Suomi/NPP VIIRS 11.45 Âµm IR imagery and the nominal 4-km imagery of the 10.7 Âµm IR from the GOES-13 Imager, above, demonstrates the importance of higher spatial resolution in detecting features that are important to aviation. Only the Suomi/NPP VIIRS image cleanly depicts the transverse bands that herald the potential presence of turbulence in the cirrus canopy. 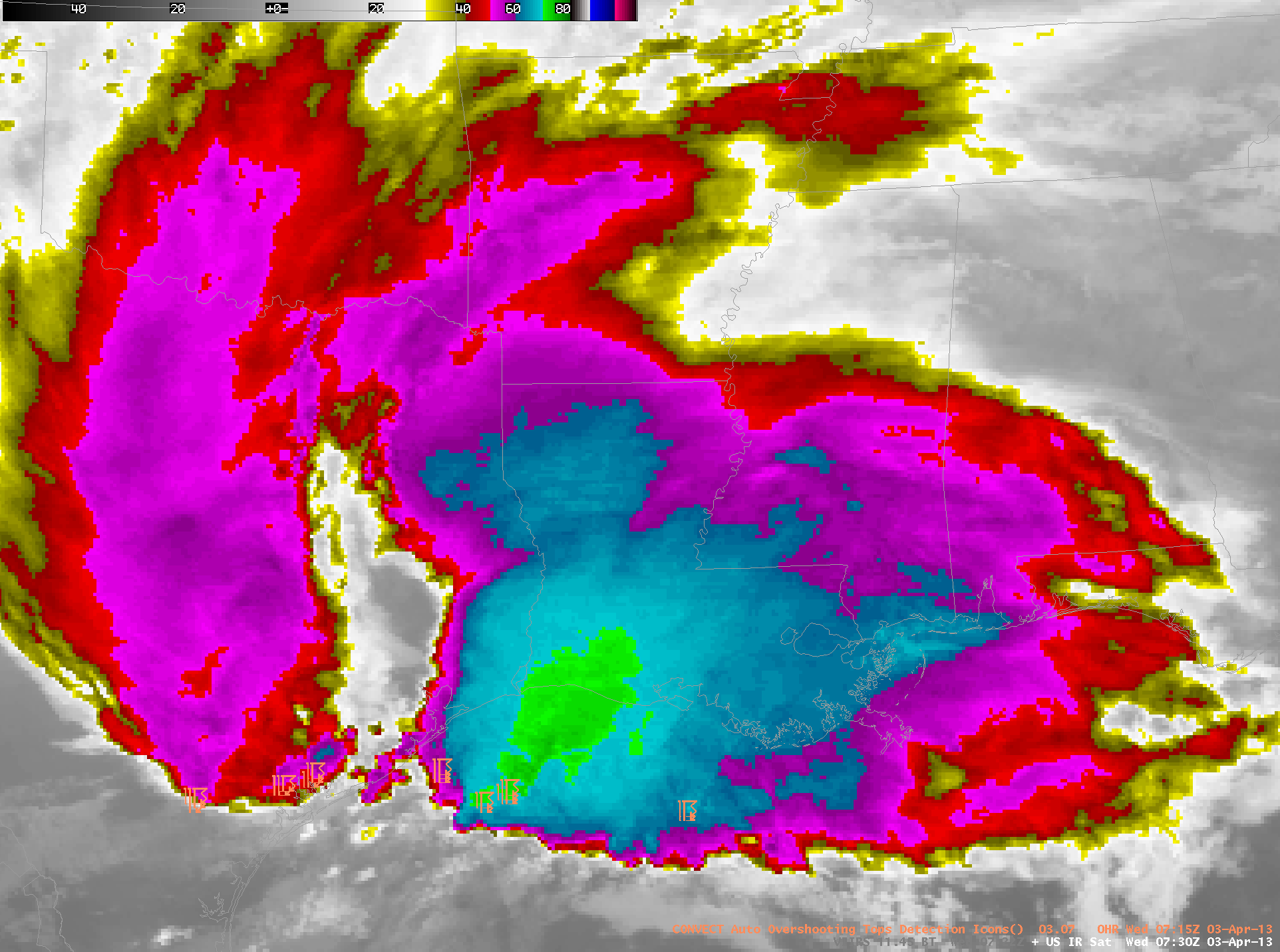 Despite limitations related to resolution, GOES data can be used to automatically detect overshooting tops. The image above shows the GOES 10.7 Âµm image from AWIPS. Auto-detected overshooting tops are also shown, and they are spread out along the southern flank of this convective system, a region where convective development was ongoing. (Click here to see a toggle between the 10.7 Âµm image with and without the auto-detected overshooting tops). That persistent convective growth was also shown by the UW Cloud-top Cooling product, shown below, a product that highlights the most rapidly cooling growing convective towers. 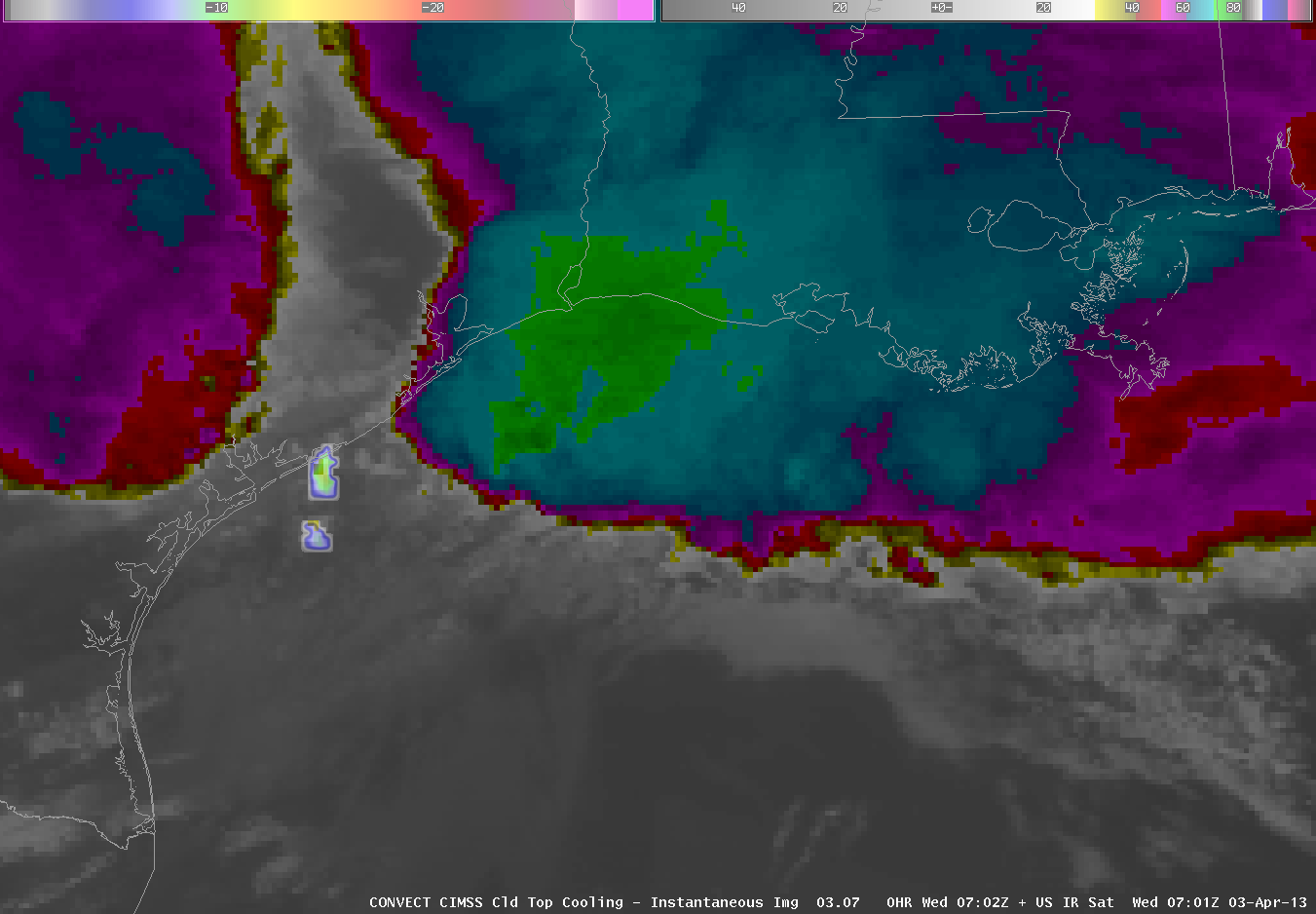 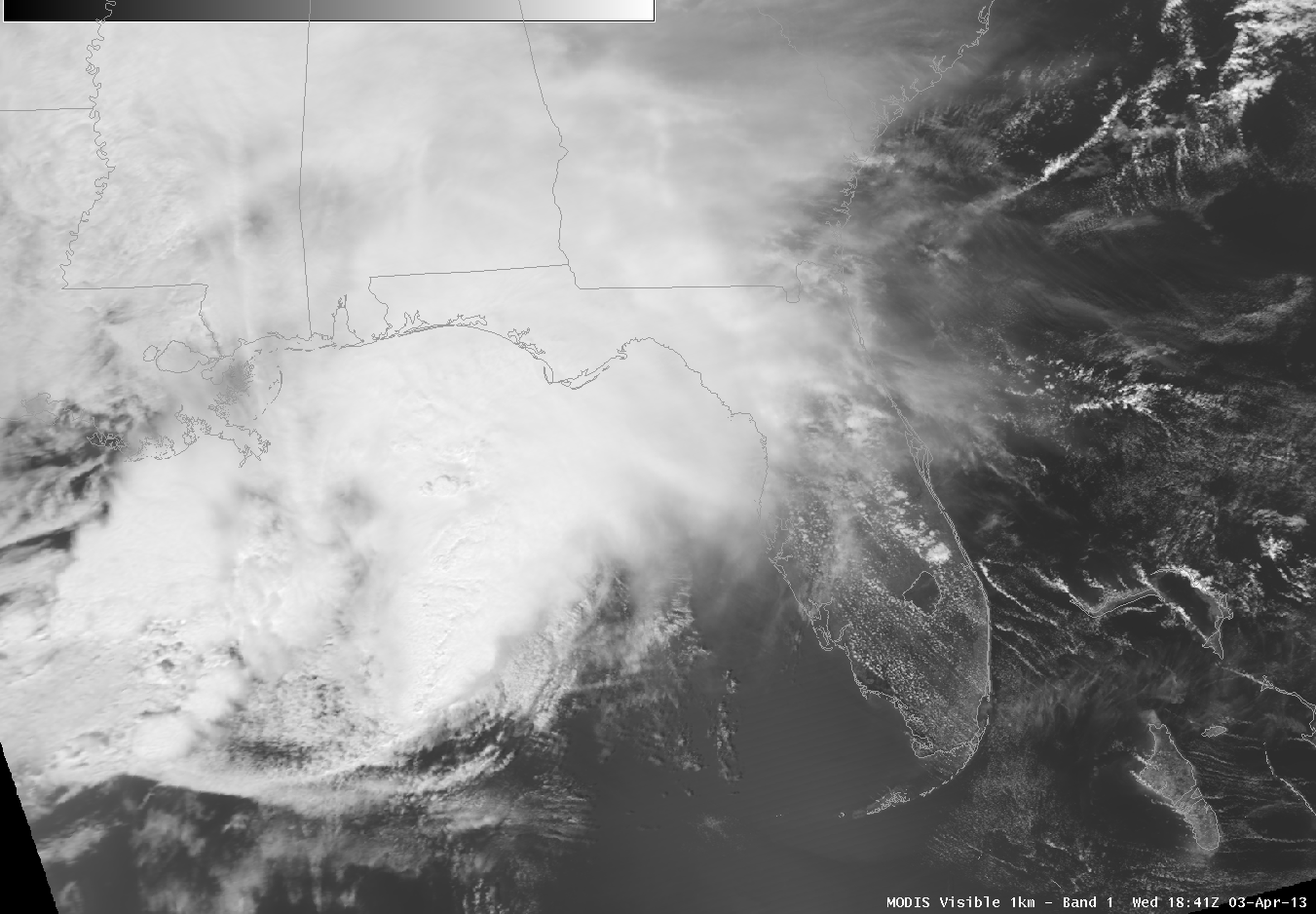 The convective system has persisted through the early afternoon on April 3rd, as shown in the loop of different MODIS channels, above (including the visible, water vapor, cirrus channel, and 10.7 Âµm IR). This system is unusually far south into the Gulf of Mexico for early April.