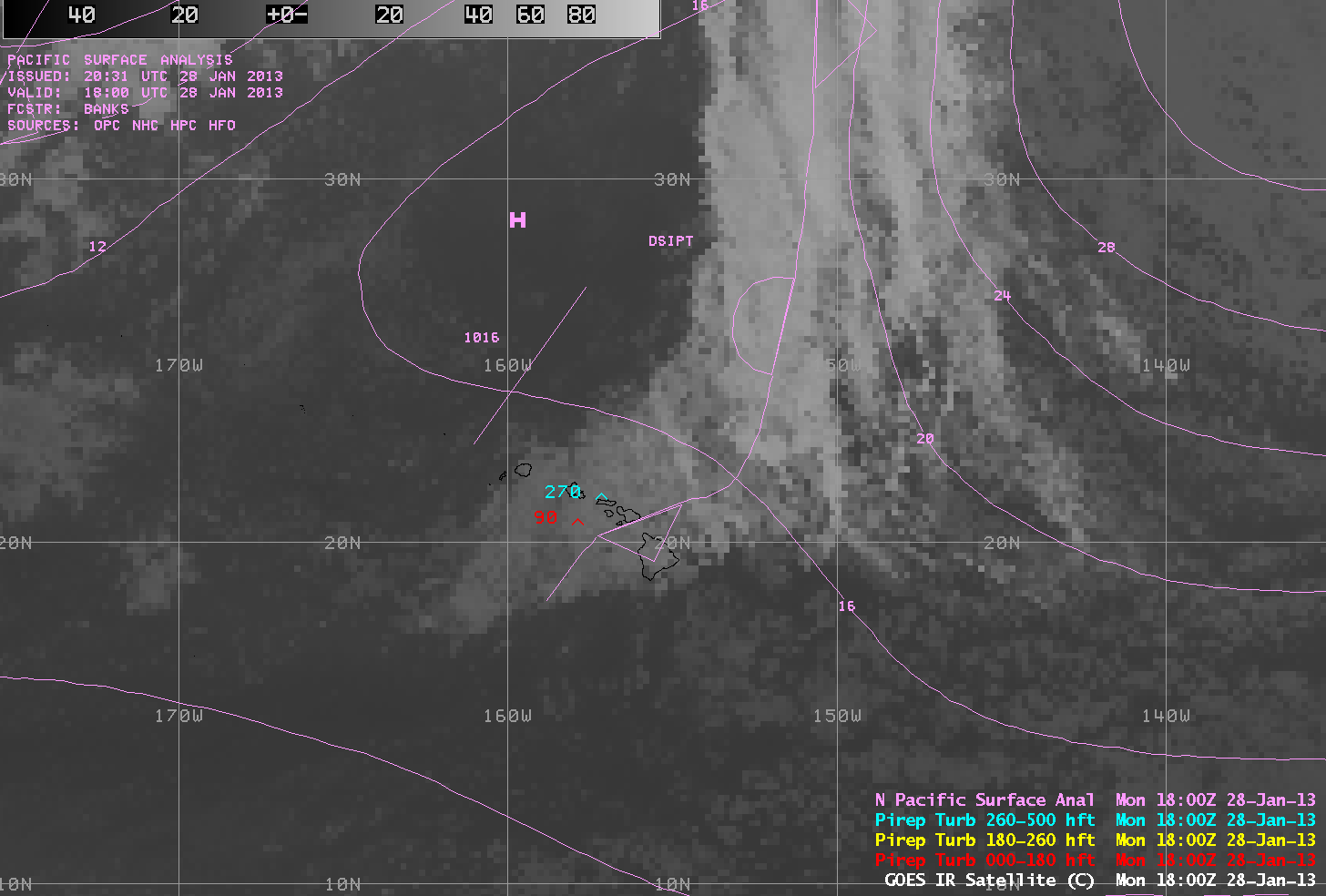 The AWIPS images above (click to play animation) showed low-resolution GOES-15 10.7 Âµm IR data with an overlay of the surface analysis and pilot reports of turbulence. A number of reports of moderate turbulence could be seen in the vicinity of the Hawaiian Islands (at altitudes between 9,000 and 27,000 feet), and the diffuse southern end of a surface cold frontal boundary had become semi-stationary over the area. The overall motion of the colder (lighter gray) IR cloud features suggested that the southwesterly flow aloft was becoming diffluent over and northeast of Hawaii.

A closer view using McIDAS images of 1-km resolution GOES-15 0.63 Âµm visible channel data (below; click image to play animation) revealed the formation of several small banded “billow cloud” features just to the northeast of the island chain. While there appeared to be no pilot reports of turbulence directly associated with the billow cloud features, the continued development of new billow cloud formations could have been a signal that turbulence was possible across the region. In addition, it is unclear whether their formation was due to flow interacting with the topography of the islands.

The corresponding GOES-15 10.7 Âµm IR channel images (below; click image to play animation) showed that IR cloud top brightness temperatures were as cold as -27Âº C (darker blue color enhancement) with the most prominent band of billow clouds at 18:30 UTC. According the the 12 UTC Hilo rawinsonde data, clouds reaching this temperature level would have ascended into the very dry air aloft. It is possible that these billow cloud features formed near the 700 hPa pressure level (where some speed and directional wind shear existed), then continued to build vertically.

GOES-15 6.5 Âµm water vapor channel images (below; click image to play animation) seemed to suggest that groups of individual billow cloud formations were developing along north-to-south oriented lines that were propagating eastward across the region during this period.

It is interesting to note that similar billow cloud formations were seen in that same region northeast of the Hawaiian Islands on Suomi NPP VIIRS 11.45 Âµm IR images at various times during the previous 24 hours (below).