The Day-Night Band on VIIRS, flying on the Suomi/NPP satellite gave an excellent view of Isaac at strong tropical storm strength in the northern Gulf of Mexico shortly after midnight on August 28 2012. VIIRS is providing something unique to forecasters: Visible imagery at night that allows easy identification of overshooting tops and cirrus blow-off, and cumulus fields in the Gulf of Mexico. The infrared window channel on VIIRS showed coldest cloud-top temperatures of -84 C, and also the effects of dry air on the tropical system. Convection is suppressed in the northern half of the storm. A zoomed-in annotated version of the above VIIRS image comparison is available here.

VIIRS data used to produce these images was acquired by the X/L band antenna here at CIMSS in Wisconsin, and was processed using the Community Satellite Processing Package (CSPP). 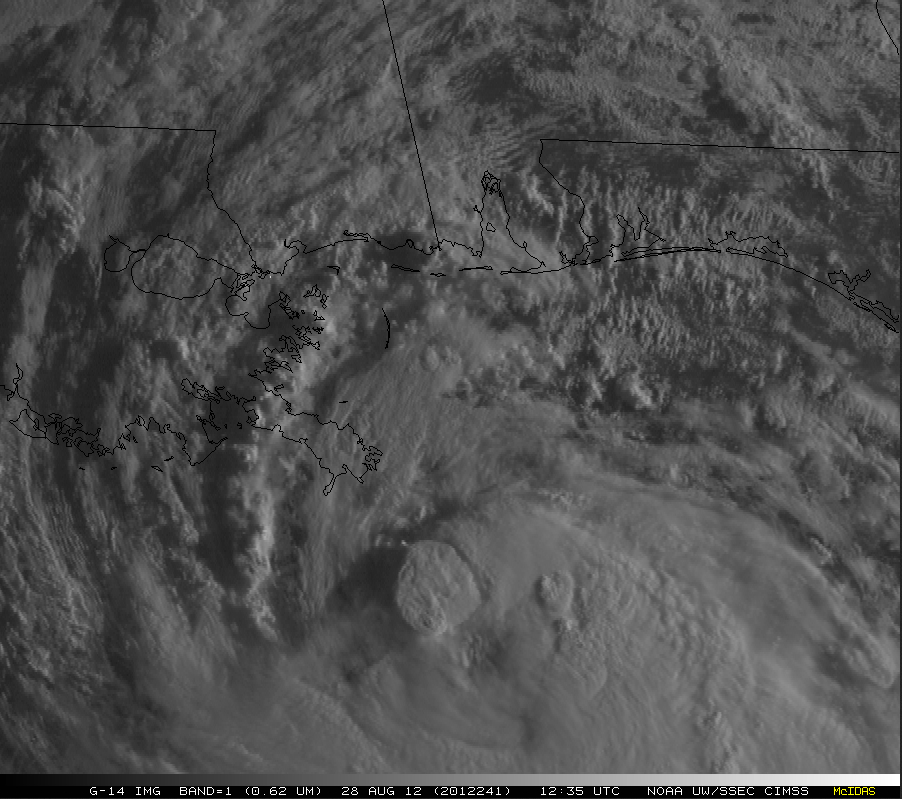 During the first few hours after sunrise, GOES-14 Super Rapid Scan Operations for GOES-R (SRSOR) visible imagery at 1-minute intervals (above; click image to play animation) showed the development of a number ofÂ  convective elements around the center of Isaac’s circulation. After about 14 UTC, the rotation of the low-level circulation of Isaac could be seen as a “clear slot” opened up between areas of convection.

More information on Isaac is available at the National Hurricane Center website, and at the CIMSS Tropical Cyclones site. One-minute imagery of the storm from GOES-14 can downloaded in real time from this website.