A sequence of three Suomi NPP VIIRS 11.45 Âµm IR channel images (above) showed Tropical Storm Flossie (NHC | CPHC) as it was moving westward toward Hawaii during the 27 July – 28 July 2013 period. The first and third of the IR images were during daylight hours, while the second image was at night. The coldest cloud top IR brightness temperature on the final 28 July/22:32 UTC image was -80 C.

The corresponding Suomi NPP VIIRS 0.64 Âµm visible channel and 0.7 Âµm Day/Night Band images are shown below. Again, the first and third in the image sequence were during daylight hours; the second image in the sequence highlights the “visible imagery at night” capability of the VIIRS Day/Night Band, given sufficient illumination of clouds by Moonlight. On this particular day, the Moon was in the “Waning Gibbous” phase, at 55% of full — still providing ample illumination of the cloud features associated with TS Flossie at 11:18 UTC or 1:18 AM local time. A comparison of the 11:18 UTC 0.7 Âµm VIIRS Day/Night Band and 11.45 Âµm IR images can be seen here.

The MIMIC Total Precipitable Water product with overlays of surface analyses (above) showed that Flossie was tapping moisture from the Intertropical Convergence Zone (ITCZ) / Monsoon Trough, which was located around 10 N latitude. An animation of the MIMIC TPW product is shown below, covering the 27 July – 29 July time period. 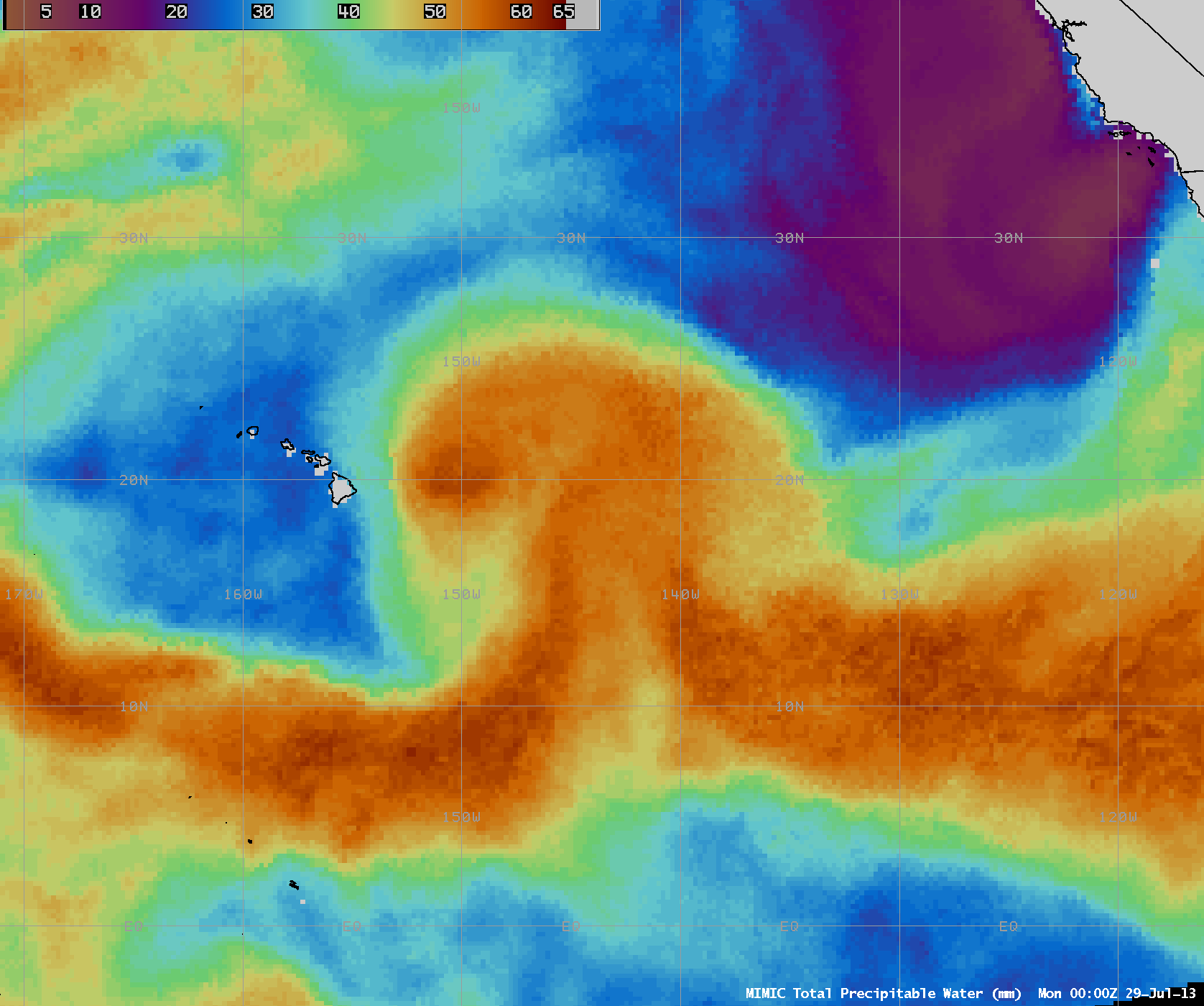 A comparison of 0.7 Âµm VIIRS Day/Night Band and 11.45 Âµm IR channel images at 11:00 UTC (1:00 AM local time) on 29 July (below) revealed that the low-level circulation center was displaced far to the northeast of any remaining deep convection (which was confined to the southeast quadrant, but still exhibited cloud-top IR brightness temperatures as cold as -75 C). In addition, the Day/Night Band image was used by the Central Pacific Hurricane Center to re-adjust the position and resulting forecast track of Tropical Storm Flossie (CPHC forecast discussion), since the “visible image at night” showed that the center of the tropical cyclone was farther north than expected.

A comparison of Suomi NPP VIIRS 0.7 Âµm Day/Night Band and 11.45 Âµm IR channel images at 12:12 UTC or 2:21 AM local time on 30 July (below) showed the weakening remnants of Tropical Storm Flossie (now a Tropical Depression) centered just north of the island of KauaÊ»i.