Hat-tip to blog reader Boris Konon for sending us this in an email:

Noted a large area of extremely cold cloud tops on a thunderstorm complex over northern Australia 17-23z 11/22.  So cold it went off our IR color table scale we use here at WSI for MTSAT!

MTSAT-1R Infrared (10.8 µm) images (above) did indeed show an area of convection that exhibited an unusually large canopy of cloud top temperatures colder than -80ºC (shades of violet to purple) on 22 November 2008. The coldest infrared brightness temperature seen with this particular thunderstorm complex was 174.78 K (-98.37ºC), just off the northern coast of Australia at 2030 UTC.

A comparison of MTSAT-1R Visible and Infrared images at 2030 UTC (below) showed that there were a number of overshooting tops within the area of cold cloud-top temperatures, as the convective system was beginning to move offshore across the Gulf of Carpenteria. This squall line was responsible for producing 25-50 mm of rainfall (BOM rainfall analysis) and wind gusts to 96 km/h (52 knots) at Bradshaw and 68 km/h (37 knots) at Gove (thanks to Jeff Callaghan, Australian Bureau of Meteorology for that information!).

Rawinsonde data from Darwin Airport at 0000 UTC on 23 November 2008 (below) indicates that the tropopause was at a very high altitude (around 100 hPa, approximately 16.0 km). Such a high and cold tropopause is not unusal in the tropics — especially in that particular region, as studies have shown that the average tropopause level is quite high and quite cold over the western tropical Pacific Ocean. 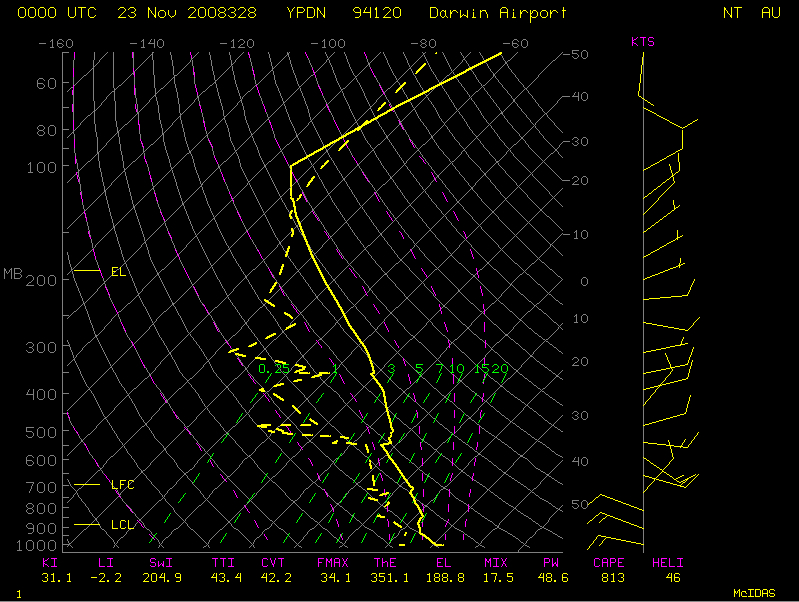