Super Typhoon Haiyan (31W) formed as a tropical depression at low latitudes in the West Pacific Ocean on 03 November 2013 — and by 18 UTC on 07 November was estimated to have peaked at an intensity of sustained 170 knot winds with gusts to 205 knots (Storm track map | ADT plot | JTWC warning text). McIDAS images of 15-minute interval 10.8 µm IR channel data from the Korean COMS-1 satellite (above; click image to play animation; a YouTube video is also available) showed the intense tropical cyclone as it moved westward and made landfall in the Philippines on 07 November. There was a large, nearly symmetric ring of very cold cloud-top IR brightness temperatures in the -80 to -90º C range (violet colors) — and at times there were a few isolated pixels colder than -90º C (yellow enhancement). For comparison, a YouTube video of MTSAT-1 10.8 µm IR imagery is also available.

As the eye was still east of the Philippines, a McIDAS-V image comparison of 375-m resolution Suomi NPP VIIRS 0.7 µm Day/Night Band (DNB) and 11.45 µm IR channel data at 16:15 UTC on 07 November (below; courtesy of William Straka, CIMSS) revealed intricate banding structures within the eyewall region on the IR image, as well as bright streaks on the DNB image due to cloud illumination by intense lightning activity.

The eye and eyewall of Haiyan moved over the eastern Philippine islands of Samar and Leyte (near the city of Tacloban) during the early morning hours, as can be seen in COMS-1 0.675 µm visible channel images (below; click image to play animation; a YouTube video is also available)

The nearly annular structure of the eyewall at 21:08 UTC on 07 November was revealed on a DMSP SSMIS 85 GHz microwave image (above) from the CIMSS Tropical Cyclones site. In addition, a sequence of eyewall replacement cycles can be seen during the 06-07 November period using the MIMIC-TC product (below). It appears as though Super Typhoon Haiyan was in the process of undergoing another eyewall replacement cycle as it was making landfall in the Philippines. 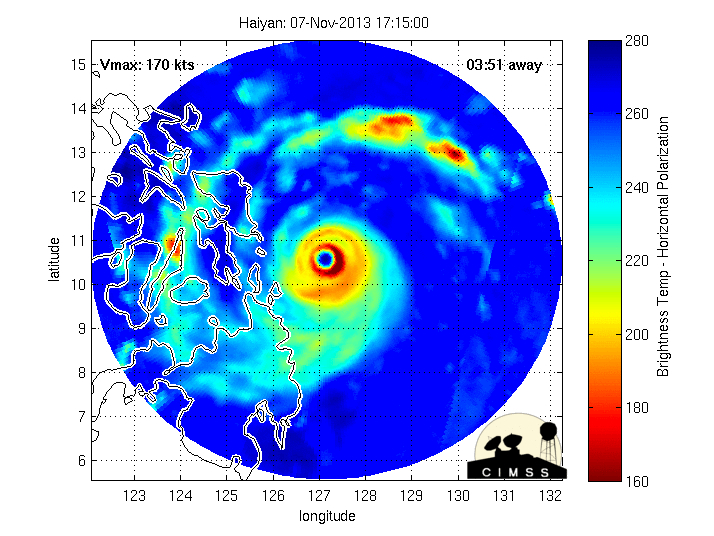 Regarding the size of and very cold cloud-top IR brightness temperatures seen with Super Typhoon Haiyan, the IR images below (courtesy of Rick Kohrs, SSEC) show a side-by-side comparison with Category 5 Hurricane Katrina (Haiyan has been artifically superimposed at the same location over the Gulf of Mexico). Note the significantly colder cloud-top IR brightness temperatures associated with Haiyan (-80 to -89 C, violet colors), due to its location in the tropics (near 10 N latitude) where the tropopause was much higher and much colder.

It is interesting to note that during the previous daytime hours (on 06 November), a series of mesovortices could be seen within the eye of Haiyan on COMS-1 visible images (below; click image to play animation; a YouTube video is also available). For more discussion on these mesovortices, see the From the Lee Side blog.

As pointed out in the Joint Typhoon Warning Center prognostic reasoning bulletin, factors that favored the intensification of Super Typhoon Haiyan included warm sea surface temperatures (above) and low values of deep layer wind shear (below).

11 November Update: A McIDAS-V image comparison ofÂ  “before Haiyan” (31 October) and “after Haiyan” (09 November) night-time Suomi NPP VIIRS 0.7 Âµm Day/Night Band data (below; courtesy of William Straka, SSEC/CIMSS) showed the extent of the power outages in the Tacloban City area and other towns in the northern portion of Leyte province, caused by devastating damage sustained during the landfall of the powerful typhoon.

Suomi/NPP Day/Night Band Imagery before and after Haiyan 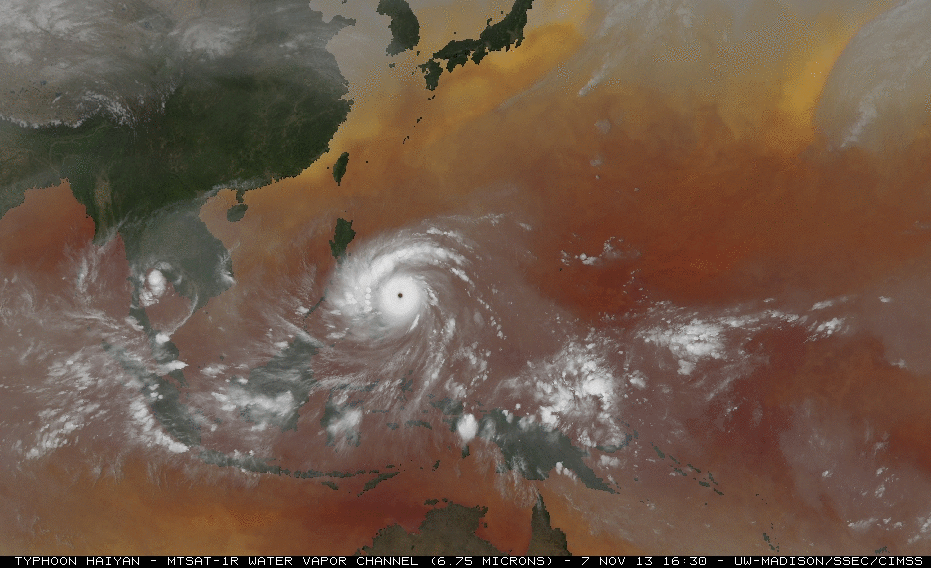