Fog/stratus along the central California coast 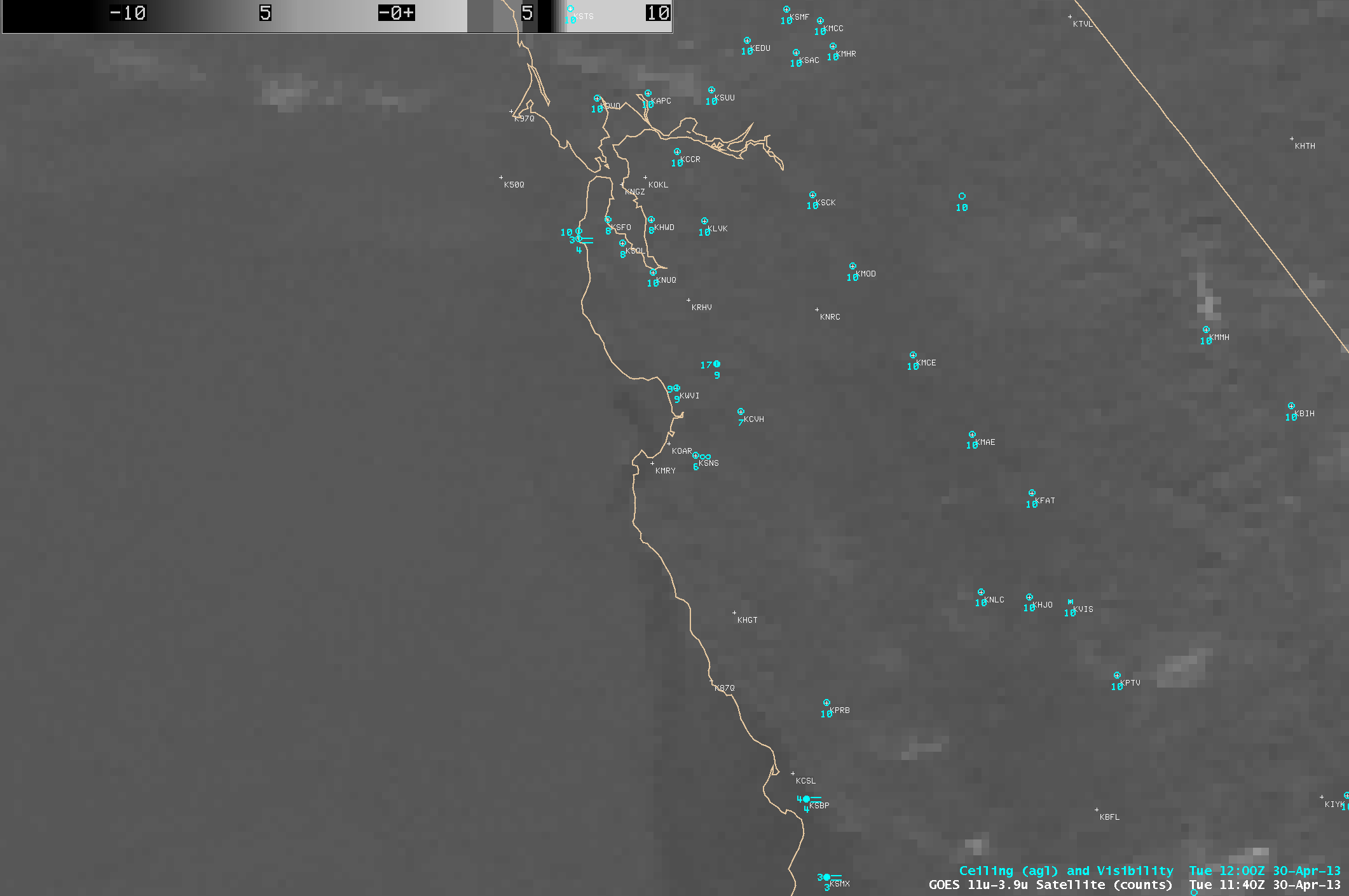 The San Francisco Bay Area National Weather Service forecast office made use of a variety of satellite images and products to monitor the development of fog and stratus clouds along the central California coast during the pre-dawn hours of 30 April 2013. From their forecast discussion:

.DISCUSSION…AS OF 3:20 AM PDT TUESDAY…SATELLITE AND SURFACE OBS INDICATE ONLY SOME MINOR POCKETS OF LOW CLOUDS AND PATCHY FOG.
RIGHT NOW HALF MOON BAY IS THE ONLY SPOT REPORTING REDUCED VISIBILITIES WHILE MONTEREY NOW HAS A CEILING. DETAILS FROM THE OVERNIGHT
SATELLITE FOG PRODUCT ARE A BIT DIFFICULT TO MAKE OUT ALTHOUGH LOOKS LIKE THE AREAS ARE VERY SMALL IN NATURE.

Using the 4-km resolution GOES-15 11-3.9 Âµm IR brightness temperature difference (BTD) “fog/stratus product” with the default gray-scale enhancement applied (above; click image to play animation), it was indeed difficult to unambiguously determine the motion and areal coverage of the darker fog and stratus features (especially in the Monterey Bay area). Applying a tailored color enhancement to that same GOES-15 BTD fog/stratus product does help a little to highlight some of the more well-defined fog and stratus features (with a darker orange color), but there is also a tendency to produce large areas of noisy “false alarm” fog/stratus signals (yellow color enhancement) over much of the inland areas of central California.

In the Aviation section of their forecast discussion, mention was made of the GOES-R Marginal Visual Flight Rules (MVFR) product, which is produced using an algorithm designed for the upcoming GOES-R satellite (but applied to current GOES-15 data):

This GOES-15Â product (below; click image to play animation) did indeed show that the areas of 50-80% MVFR Probability were patchy in nature in the vicinity of Monterey Bay. 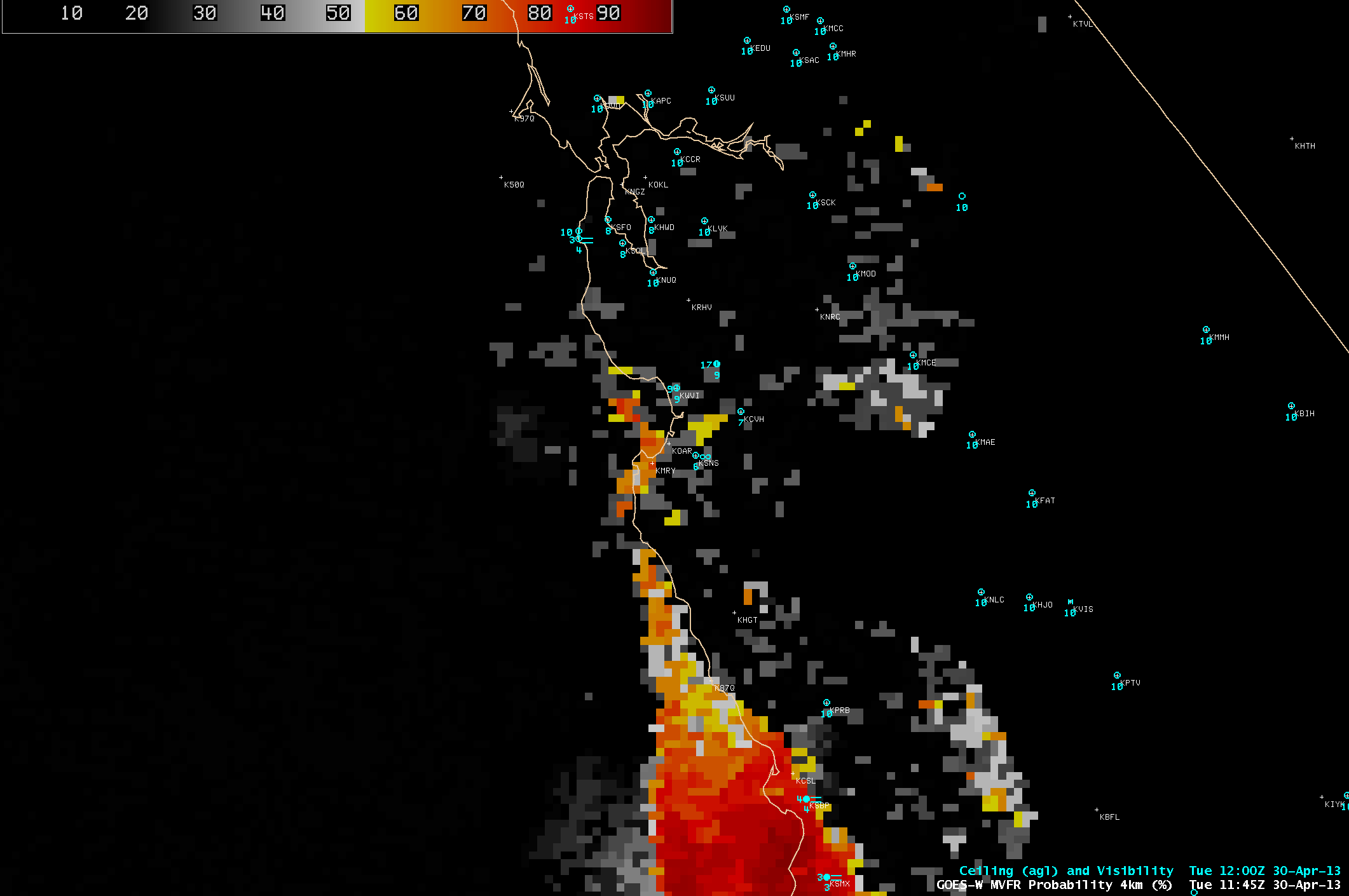 Mention was also made of the Suomi NPP VIIRS 0.7 Âµm Day/Night Band, which provided a high spatial resolution (750 meters, re-mapped onto a 1-km AWIPS grid) “visible image at night” (below), helping to confirm the spotty nature of the coverage of fog/stratus in the Monterey Bay area. 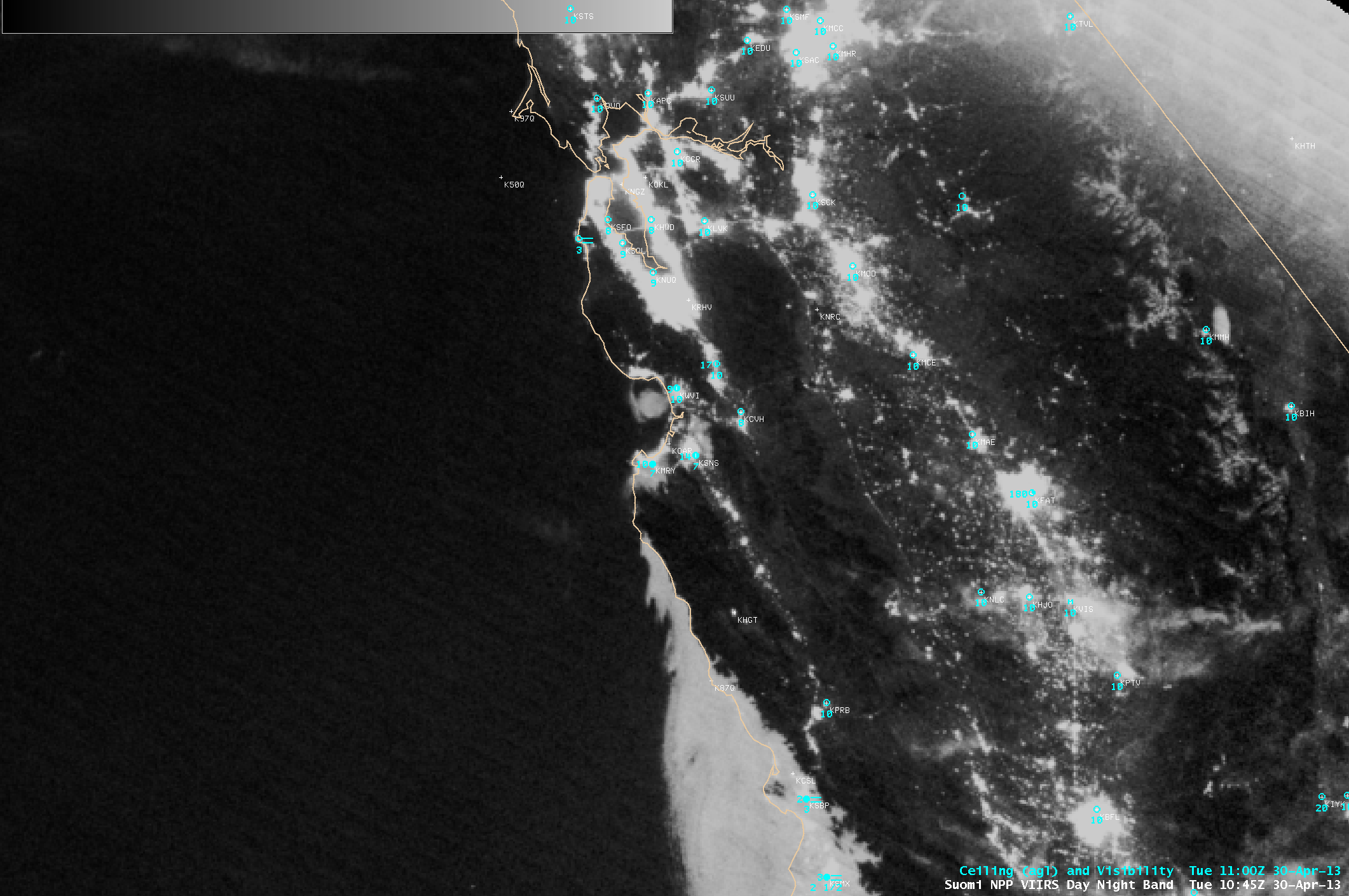